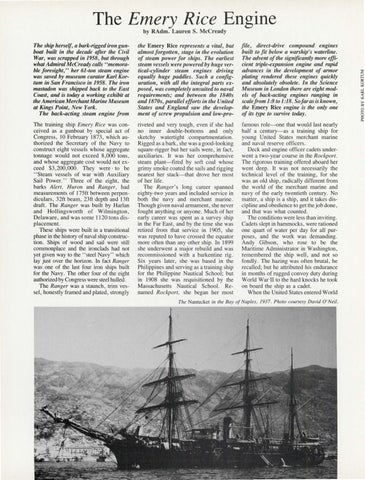 The Emery Rice Engine by RAdm. Lauren S. McCready The ship herself, a bark-rigged iron gunboat built in the decade after the Civil War, was scrapped in 1958, but through what Admiral McCready calls &quot;memorable foresight,&#39;&#39; her 61-ton steam engine was saved by museum curator Karl Kortum in San Francisco in 1958. The iron mastadon was shipped back to the East Coast, and is today a working exhibit at the American Merchant Marine Museum at Kings Point, New York. The back-acting steam engine from

the Emery Rice represents a vital, but almost forgotten, stage in the evolution of steam power for ships. The earliest steam vessels were powered by huge vertical-cylinder steam engines driving equally huge paddles. Such a configuration, with all the integral parts exposed, was completely unsuited to naval requirements; and between the 1840s and 1870s, parallel efforts in the United States and England saw the development of screw propulsion and low-pro-

file, direct-drive compound engines built to fit below a warship&#39;s waterline. The advent of the significantly more efficient triple-expansion engine and rapid advances in the development of annor plating rendered these engines quickly and absolutely obsolete. In the Science Museum in London there are eight models of back-acting engines ranging in scalefroml:8to1:18. Sofaras is known, the Emery Rice engine is the only one of its type to survive today.

The training ship Emery Rice was conceived as a gunboat by special act of Congress, 10 February 1873 , which authorized the Secretary of the Navy to construct eight vessels whose aggregate tonnage would not exceed 8,000 tons, and whose aggregate cost would not exceed $3,200,000. They wereÂˇ to be &quot;Steam vessels of war with Auxiliary Sail Power.&quot; Three of the eight, the barks Alert, Huron and Ranger, had measurements of I 75ft between perpendiculars, 32ft beam, 23ft depth and 13ft draft. The Ranger was built by Harlan and Hollingsworth of Wilmington, Delaware , and was some 1120 tons displacement. These ships were built in a transitional phase in the history of naval ship construction . Ships of wood and sail were still commonplace and the ironclads had not yet given way to the &quot;steel Navy&quot; which lay just over the horizon . In fact Ranger was one of the last four iron ships built for the Navy . The other four of the eight authorized by Congress were steel hulled. The Ranger was a staunch , trim vessel, honestly framed and plated , strongly

riveted and very tough, even if she had no inner double-bottoms and only sketchy watertight compartmentation. Rigged as a bark , she was a good-looking square-rigger but her sails were, in fact, auxiliaries . It was her comprehensive steam plant-fired by soft coal whose grimy smoke coated the sails and rigging nearest her stack-that drove her most of her life. The Ranger&#39;s long career spanned eighty-two years and included service in both the navy and merchant marine. Though given naval armament, she never fought anything or anyone. Much of her early career was spent as a survey ship in the Far East, and by the time she was retired from that service in 1905, she was reputed to have crossed the equator more often than any other ship. In 1899 she underwent a major rebuild and was recommissioned with a barkentine rig. Six years later, she was based in the Philippines and serving as a training ship for the Philippine Nautical School; but in 1908 she was requisitioned by the Massachusetts Nautical School. Renamed Rockport, she began her most

famous role--one that would last nearly half a century-as a training ship for young United States merchant marine and naval reserve officers. Deck and engine officer cadets underwent a two-year course in the Rockport. The rigorous training offered aboard her went deep . It was not necessarily the technical level of the training, for she was an old ship, radically different from the world of the merchant marine and navy of the early twentieth century. No matter, a ship is a ship, and it takes discipline and obedience to get the job done , and that was what counted . The conditions were less than inviting. Cadets slept in hammocks, were rationed one quart of water per day for all purposes, and the work was demanding. Andy Gibson, who rose to be the Maritime Administrator in Washington, remembered the ship well , and not so fondly. The hazing was often brutal, he recalled; but he attributed his endurance in months of rugged convoy duty during World War II to the hard knocks he took on board the ship as a cadet. When the United States entered World