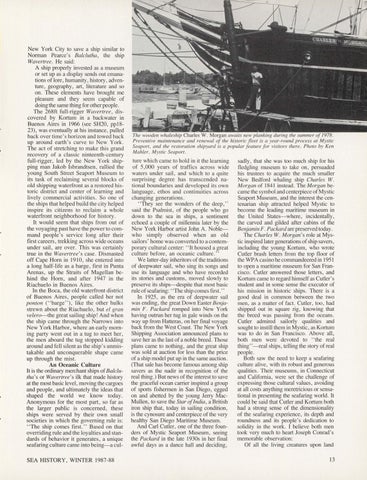 New York City to save a ship similar to Norman Pearce&#39;s Balclutha, the ship Wavertree . He said: A ship properly invested as a museum or set up as a display sends out emanations of lore, humanity, history, adventure, geography, art, literature and so on . These elements have brought me pleasure and they seem capable of doingthe same thing for other people. The 268ft full-rigger Wavertree , discovered by Kortum in a backwater in Buenos Aires in 1966 (see SH20, pp 1823), was eventually at his instance, pulled back over time&#39;s horizon and towed back up around earth&#39;s curve to New York . The act of stretching to make this grand recovery of a classic ninteenth-century full-rigger, led by the New York shipping man Jakob Isbrandtsen, rallied the young South Street Seaport Museum to its task of reclaiming several blocks of old shipping waterfront as a restored historic district and center of learning and lively commercial activities. So one of the ships that helped build the city helped inspire its citizens to reclaim a whole waterfront neighborhood for history . It would seem that ships from out of the voyaging past have the power to command people&#39;s service long after their first careers, trekking across wide oceans under sail, are over. This was certainly true in the Wavertree&#39;s case. Dismasted off Cape Horn in 1910, she entered into a long half-life as a barge , first in Punta Arenas, up the Straits of Magellan behind the Horn, and after 1947 in the Riachuelo in Buenos Aires. In the Boca, the old waterfront district of Buenos Aires, people called her not ponton (&quot;barge&quot;), like the other hulks strewn about the Riachuelo, but el gran velero--the great sailing ship! And when the ship came through the Narrows into New York Harbor, where an early morning party went out in a tug to meet her, the men aboard the tug stopped kidding around and fell silent as the ship&#39;s unmistakable and unconquerable shape came up through the mist. An Oceanic Culture It is the ordinary merchant ships of Balclutha&#39; s or Wavertree&#39;s ilk that made history at the most basic level, moving the cargoes and people, and ultimately the ideas that shaped the world we know today. Anonymous for the most part, so far as the larger public is concerned, these ships were served by their own small societies in which the governing rule is: &quot;The ship comes first.&quot; Based on that overriding rule and the loyalties and standards of behavior it generates, a unique seafaring culture came into being-a culSEA HISTORY, WINTER 1987-88

The wooden whaleship Charles W. Morgan awaits new planking during the summer of 1978. Preventive maintenance and renewal of the historic fleet is a year-round process at Mystic Seaport, and the restoration shipyard is a popular feature for visitors there. Photo by Ken Mahler , Mystic Seaport.

ture which came to hold in it the learning of 5,000 years of traffics across wide waters under sail , and which to a quite surprising degree has transcended national boundaries and developed its own language, ethos and continuities across changing generations. &quot; They see the wonders of the deep,&quot; said the Psalmist, of the people who go down to the sea in ships, a sentiment echoed a couple of millennia later by the New York Harbor artist John A. Noblewho simply observed when an old sailors&#39; home was converted to a contemporary cultural center: &#39;&#39;It housed a great culture before , an oceanic culture.&quot; We latter-day inheritors of the traditions of deepwater sail, who sing its songs and use its language and who have recorded its stories and customs, moved slowly to preserve its ships--despite that most basic rule of seafaring: &#39; &#39;The ship comes first.&#39; &#39; In 1925 , as the era of deepwater sail was ending, the great Down Easter Benjamin F. Packard romped into New York having outrun her tug in gale winds on the way up from Hatteras, on her final voyage back from the West Coast. The New York Shipping Association announced plans to save her as the last of a noble breed. Those plans came to nothing , and the great ship was sold at auction for less than the price of a ship model put up in the same auction. (That sale has become famous among ship savers as the nadir in recognition of the real thing.) But news of the interest to save the graceful ocean carrier inspired a group of sports fishermen in San Diego, egged on and abetted by the young Jerry MacMullen, to save the Star of India , a British iron ship that, today in sailing condition , is the cynosure and centerpiece of the very healthy San Diego Maritime Museum. And Carl Cutler, one of the three founders of Mystic Seaport Museum, seeing the Packard in the late 1930s in her final awful days as a dance hall and deciding,

sadly, that she was too much ship for his fledgling museum to take on, persuaded his trustees to acquire the much smaller New Bedford whaling ship Charles W. Morgan of 1841 instead. The Morgan b&lt;;came the symbol and centerpiece of Mystic Seaport Museum , and the interest the centenarian ship attracted helped Mystic to become the leading maritime museum in the United States-where, incidentally, the carved and gilded after cabins of the Benjamin F. Packard are preserved today. The Charles W. Morgan&#39;s role at Mystic inspired later generations of ship savers, including the young Kortum, who wrote Cutler brash letters from the top floor of the WP A casino he commandeered in 1951 to open a maritime museum for San Francisco. Cutler answered those letters, and Kortum came to regard himself as Cutler&#39;s student and in some sense the executor of his mission in historic ships. There is a good deal in common between the two men, as a matter of fact. Cutler, too, had shipped out in square rig, knowing that the breed was passing from the oceans. Cutler admired sailorly qualities and sought to instill them in Mystic, as Kortum was to do in San Francisco. Above all, both men were devoted to &quot;the real thing&quot;-real ships , telling the story ofreal people. Both saw the need to keep a seafaring culture alive, with its robust and generous qualities . Their museums, in Connecticut and California, were set the challenge of expressing those cultural values, avoiding at all costs anything meretricious or sensational in presenting the seafaring world. It could be said that Cutler and Kortum both had a strong sense of the dimensionality of the seafaring experience, its depth and roundness and its people&#39;s dedication to solidity in the work. I believe both men took very much to heart Joseph Conrad&#39;s memorable observation: Of all the living creatures upon land 13