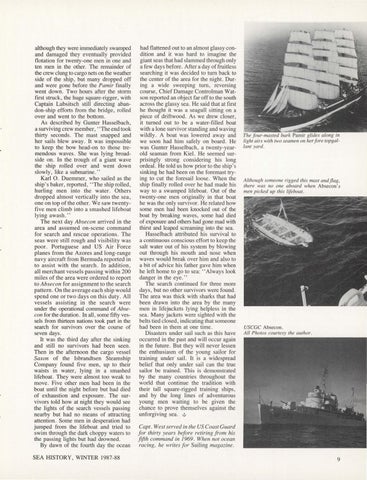 although they were immediately swamped and damaged they eventually provided flotation for twenty-one men in one and ten men in the other. The remainder of the crew clung to cargo nets on the weather side of the ship, but many dropped off and were gone before the Pamir finally went down. Two hours after the storm first struck, the huge square-rigger, with Captain Lubsitsch still directing abandon-ship efforts from the bridge , rolled over and went to the bottom. As described by Gunter Hasselbach , a surviving crew member, &#39;&#39;The end took thirty seconds. The mast snapped and her sails blew away. It was impossible to keep the bow head-on to those tremendous waves . She was lying broadside on . In the trough of a giant wave the ship rolled over and went down slowly, like a submarine.&quot; Karl 0. Duemmer, who sailed as the ship&#39;s baker, reported , &quot;The ship rolled , hurling men into the water. Others dropped almost vertically into the sea, one on top of the other. We saw twentyfive men climb into a smashed lifeboat lying awash.&quot; The next day Absecon arrived in the area and assumed on-scene command for search and rescue operations. The seas were still rough and visibility was poor. Portuguese and US Air Force planes from the Azores and long-range navy aircraft from Bermuda reported in to assist with the search. In addition, all merchant vessels passing within 200 miles of the area were ordered to report to Absecon for assignment to the search pattern. On the average each ship would spend one or two days on this duty. All vessels assisting in the search were under the operational command of Absecon for the duration . In all, some fifty vessels from thirteen nations took part in the search for survivors over the course of seven days. It was the third day after the sinking and still no survivors had been seen. Then in the afternoon the cargo vessel Saxon of the Isbrandtsen Steamship Company found five men, up to their waists in water, lying in a smashed lifeboat. They were almost too weak to move. Five other men had been in the boat until the night before but had died of exhaustion and exposure . The survivors told how at night they would see the lights of the search vessels passing nearby but had no means of attracting attention. Some men in desperation had jumped from the lifeboat and tried to swim through the dark choppy waters to the passing lights but had &lt;lfowned. By dawn of the fourth day the ocean SEA HISTORY, WINTER 1987-88

had flattened out to an almost glassy condition and it was hard to imagine the giant seas that had slammed through only a few days before. After a day of fruitless searching it was decided to turn back to the center of the area for the night. During a wide sweeping turn, reversing course, Chief Damage Controlman Watson reported an object far off to the south across the glassy sea. He said that at fust he thought it was a seagull sitting on a piece of driftwood. As we drew closer, it turned out to be a water-filled boat with a lone survivor standing and waving wildly. A boat was lowered away and we soon had him safely on board. He was Gunter Hasselbach , a twenty-yearold seaman from Kiel. He seemed surprisingly strong considering his long ordeal. He told us how prior to the ship&#39;s sinking he had been on the foremast trying to cut the foresail loose . When the ship finally rolled over he had made his way to a swamped lifeboat. Out of the twenty-one men originally in that boat he was the only survivor. He related how some men had been knocked out of the boat by breaking waves, some had died of exposure and others had gone mad with thirst and leaped screaming into the sea. Hasselbach attributed his survival to a continuous conscious effort to keep the salt water out of his system by blowing out through his mouth and nose when waves would break over him and also to a bit of advice his father gave him when he left home to go to sea: &quot;Always look danger in the eye.&quot; The search continued for three more days, but no other survivors were found. The area was thick with sharks that had been drawn into the area by the many men in lifejackets lying helpless in the sea. Many jackets were sighted with the belts tied closed , indicating that someone had been in them at one time. Disasters under sail such as this have occurred in the past and will occur again in the future . But they will never lessen the enthusiasm of the young sailor for training underÂˇ sail. It is a widespread belief that only under sail can the true sailor be trained. This is demonstrated by the many countries throughout the world that continue the tradition with their tall square-rigged training ships, and by the long lines of adventurous young men waiting to be given the chance to prove themselves against the unforgiving sea. J,

The four-masted bark Pamir glides along in light airs with two seamen on her fore topgallant yard.

Although someone rigged this mast and flag, there was no one aboard when Absecon&#39; s men picked up this lifeboat.

Capt. West served in the US Coast Guard for thirty years before retiring from his fifth command in 1969. When not ocean racing, he writes for Sailing magazine.