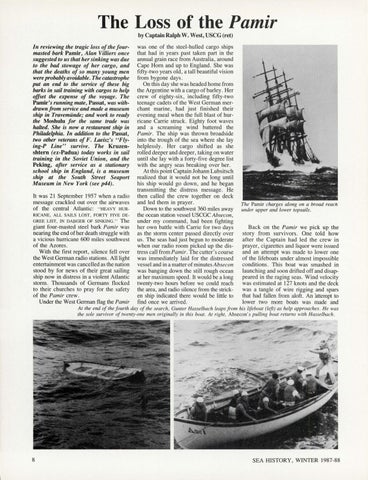 The Loss of the Pamir by Captain Ralph W. West, USCG (ret)

In reviewing the tragic loss ofthefourmasted bark Pamir, Alan Villiers once suggested to us that her sinking was due to the bad stowage of her cargo, and that the deaths of so many young men were probably avoidable. The catastrophe put an end to the service of these big barks in sail training with cargos to help offset the expense of the voyage. The Pamir&#39;s running mate, Passat, was withdrawn from service and made a museum ship in Travemiinde; and work to ready the Moshulu for the same trade was halted. She is now a restaurant ship in Philadelphia. In addition to the Passat, two other veterans of F. Laeisz&#39;s &quot;Flying-P Line&quot; survive. The Kruzenshtern (ex-Padua) today works in sail training in the Soviet Union, and the Peking, after service as a stationary school ship in England, is a museum ship at the South Street Seaport Museum in New York (see p44). It was 2 1 September 1957 when a radio message crackled out over the airwaves of the central Atlantic: &quot; HEAVY HURRICANE, ALL SAILS LOST , FORTY FIVE DEGREE LIST , IN DANGER OF SINKING. &quot; The

giant four-masted steel bark Pamir was nearing the end of her death struggle with a vicious hurricane 600 miles southwest of the Azores. With the first report , silence fell over the West German radio stations. All light entertainment was cancelled as the nation stood by for news of their great sailing ship now in distress in a violent Atlantic storm . Thousands of Germans flocked to their churches to pray for the safety of the Pamir crew. Under the West German flag the Pamir

was one of the steel-hulled cargo ships that had in years past taken part in the annual grain race from Australia, around Cape Hom and up to England. She was fifty-two years old, a tall beautiful vision from bygone days. On this day she was headed home from the Argentine with a cargo of barley. Her crew of eighty-six, including fifty-two teenage cadets of the West German merchant marine, had just finished their evening meal when the full blast of hurricane Carrie struck . Eighty foot waves and a screaming wind battered the Pamir. The ship was thrown broadside into the trough of the sea where she lay helplessly . Her cargo shifted as she rolled deeper and deeper, taking on water until she lay with a forty-five degree list with the angry seas breaking over her. At this point Captain Johann Lubsitsch realized that it would not be long until his ship would go down , and he began transmitting the distress message . He then called the crew together on deck and led them in prayer. Down to the southwest 360 miles away the ocean station vessel USCGCAbsecon, under my command, had been fighting her own battle with Carrie for two days as the storm center passed directly over us. The seas had just begun to moderate when our radio room picked up the distress call from Pamir. The cutter&#39;s course was immediately laid for the distressed vessel and in a matterof minutes Absecon was banging down the still rough ocean at her maximum speed. It would be a long twenty-two hours before we could reach the area, and radio silence from the stricken ship indicated there would be little to find once we arrived.

The Pamir charges along on a broad reach under upper and lower topsails.

Back on the Pamir we pick up the story from survivors. One told how after the Captain had led the crew in prayer, cigarettes and liquor were issued and an attempt was made to lower one of the lifeboats under almost impossible conditions. This boat was smashed in launching and soon drifted off and disappeared in the raging seas. Wind velocity was estimated at 127 knots and the deck was a tangle of wire rigging and spars that had fallen from aloft. An attempt to lower two more boats was made and

At the end of the fourth day of the search, Gunter Hasselbach leaps from his lifeboat (left) as help approaches. He was the sole survivor of twenty-one men originally in this boat. At right, Absecon&#39; s pulling boat returns with Hasselbach.