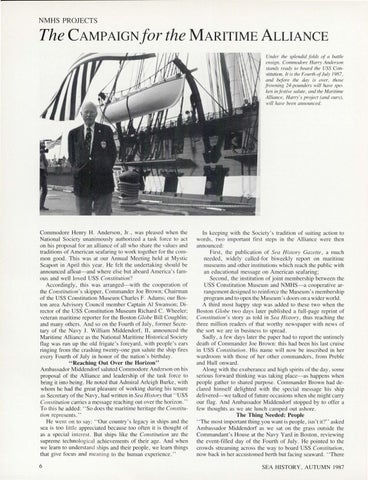 The CAMPAIGNfor the MARITIME ALLIANCE ~

Commodore Henry H. Anderson, Jr., was pleased when the National Society unan imously authorized a task force to act on hi s proposal for an alliance of all who share the values and traditions of A merican seafaring to work together for the common good. This was at our Annual Meeting held at Mystic Seaport in April this year. He fe lt the undertak ing shoul d be announced afloat-and where else but aboard America &#39;s fa mous and well loved USS Constitution? Acco rdin gly, thi s was arranged-w ith the cooperation of the Constitutio n &#39;s skipper, Commander Joe Brown ; Chairman of the USS Constitution Museum Charl es F. Adams; our Boston area Advisory Counc il member Captain Al Swanson; Director of the USS Constituti on Museum Richard C. Wheeler; vetera n maritime reporter fo r the Boston G lobe Bill Coughlin ; and many othe rs. And so on the Fourth of Jul y, forme r Secretary of the Navy J . William Middendorf, II , announced the Maritime Alliance as the National Maritime Hi storical Soc iety fl ag was run up the old frigate&#39;s foreyard , with people &#39;s ears ring ing from the crashing twenty-one gun salute the ship fires every Fourth of Jul y in honor of the nation&#39; s birthday.

&quot;Reaching Out Over the Horizon&quot; Ambassador Middendorf saluted Commodore Anderson on hi s proposal of the Alliance and leadership of the task force to bring it into being . He noted that Admiral Arleigh Burke, with whom he had the great pleasure of working during his tenure as Secretary of the Navy, had written in Sea History that &quot;USS Constitution carries a message reaching out over the horizon.&quot; To this he added: &quot; So does the maritime heritage the Constitu1ion represents.&quot; He went on to say: &quot; Our country&#39;s legacy in ships and the sea is too little appreciated because too often it is thought of as a spec ial interest. But ships like the Constitu lion are the supreme technological ac hievements of their age . And when we learn to understand ships and the ir people, we learn things that g ive focus and meaning to the human ex perience.&quot; 6

Under the splendid folds of a ballle ensign, Commodore Harry Anderson stands ready to board the USS Constitut ion. It is the Fourth of July 1987, and before the day is over, those frowning 24-pounders will have spoken in fes tive salute, and 1he Marilime Alliance, Harry&#39;s projec/ (and ours), will have been announced.

In keep ing with the Soc iety&#39;s tradit ion of suiting ac ti on to words, two important first steps in the Alliance were then an no un ced: First, the publication of Sea His10ry Gazelle, a much needed , wide ly called-for biweekly report on mari time museums and other in stitutions which reach the public with an ed ucational message on American seafaring; Second , the institution of joi nt membership between the USS Const itution Museum and NMHS-a cooperati ve arra nge ment designed to reinforce the Museum &#39;s membership program and to open the Museum &#39;s doors on a wider world. A third most happy step was added to these two when the Boston G lobe two days later publi shed a full-page reprint of Cons1i1u1ion&#39;s story as told in Sea History, thus reaching the three million readers of that wo rthy news pape r with news of the sort we are in business to spread . Sad ly, a few days later the paper had to report the untime ly death of Commander Joe Brown: this had been hi s last crui se in USS Cons1 i1u1ion. Hi s name will now be inscribed in her wardroom with those of her other com manders, from Preble and Hull onward. Along with the ex uberance and hi gh spirits of the day, some serious forward thinking was tak ing place-as happens when people gather to shared purpose. Commander Brown had declared him self delighted with the spec ial message hi s ship delivered-we talked of future occas ions when she might carry our flag. And Ambassador Middendorf stopped by to offer a few thoughts as we ate lunch cam ped out as hore.

The Thing Needed: People &quot; The most important thin g you want is people, isn&#39; t it?&quot; asked Ambassador Middendorf as we sat on the grass outside the Commandant &#39;s House at the Navy Yard in Boston , reviewing the event-filled day of the Fourth of Jul y. He pointed to the crowds streaming across the way to board USS Constitution, now back in her acc ustomed berth but fac ing seaward . &quot;There SEA HISTORY , AUTUMN 1987