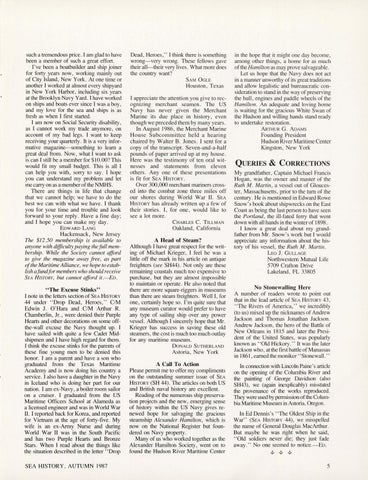 such a tremendous price . I am glad to have been a member of such a great effort. I&#39;ve been a boatbuilder and ship joiner for forty years now, working mainly out of City Island, New York. At one time or another I worked at almost every shipyard in New York Harbor, including six years at the Brooklyn Navy Yard . I have worked on ships and boats ever since I was a boy, and my love for the sea and ships is as fresh as when I first started. I am now on Social Security disability , as I cannot work my trade anymore, on account of my bad legs. I want to keep receiving your quarterly . It is a very informative magazine-something to learn a great deal from. Now , what I want to ask is can I still be a member for$ I0. 00? This would fit my small budget. This is all I can help you with, sorry to say . I hope you can understand my problem and let me carry on as a member of the NMHS. There are things in life that change that we cannot help; we have to do the best we can with what we have. I thank you for your time and trouble and look forward to your reply . Have a fine day; and I hope you can make my day. EDWARD LANG Hackensack , New Jersey The $12 .50 membership is available to anyone with difficulty paying the full membership. While the Society cannot afford to give the magazine away free, as part of the Maritime Alliance, we hope to establish a fund for members who should receive SEA HISTORY, but cannot afford it.- ED .

&quot;The Excuse Stinks&quot; I note in the letters section of SEA HISTORY 44 under &quot; Drop Dead , Heroes, &quot; C/M Edwin J. O &#39; Hara and C/M Arthur R. Chamberlin, Jr., were denied their Purple Hearts and other decorations on some offthe-wall excuse the Navy thought up . I have sailed with quite a few Cadet Midshipmen and I have high regard for them . I think the excuse stinks for the parents of these fi ne young men to be denied this honor. I am a parent and have a son who graduated from the Texas Maritime Academy and is now doing his country a service. I also have a daughter in the Navy in Iceland who is doing her part for our nation . I am ex-Navy , a boiler room sailor on a cruiser. I graduated from the US Maritime Officers School at Alameda as a licensed engineer and was in World War II . I reported back for Korea, and reported for Vietnam at the age of forty -five. My wife is an ex-Army Nurse and during World War II was in the South Pacific and has two Purple Hearts and Bronze Stars. When I read about the things like the situation described in the letter &quot; Drop SEA HISTORY , AUTUMN 1987

Dead, Heroes ,&quot; I think there is something wrong-very wrong. These fellows gave their all- their very lives . What more does the country want? SAM OGLE Houston , Texas I appreciate the attention you g ive to recognizing merchant seamen . The US Navy has never given the Merchant Marine its due place in history , even though we preceded them by many years . In August 1986 , the Merchant Marine Hou se Subcommittee held a hearing chaired by Walter B. Jones. I sent for a copy of the transcript. Seven-and-a-half pounds of paper arrived up at my house. Here was the testimony of ten oral witnesses and statements from eleven others. Any one of these presentations is fit for SEA HISTORY. Over 300,000 merchant mariners crossed into the combat zone three miles off our shores during World War II . SEA HISTORY has already written up a few of the ir stories. I, for one , would like to see a lot more. CHARLES C. TILLMAN Oakland , California

A Head of Steam? Although I have great respect for the writing of Michael Krieger, I feel he was a little off the mark in his article on antique frei ghters (see SH44). Not only are these remaining coastals much too expensive to purchase, but they are almost impossible to maintain or operate . He also noted that there are more square-riggers in museums than there are steam freighters. Well I, for one , certainly hope so. I&#39;m quite sure that any museum curator would prefer to have any type of sailing ship over any power vessel. Although I sincerely hope that Mr. Krieger has success in saving these old steamers, the cost is much too much outlay for any maritime museum . DONALD SUTHERLAND Astoria , New York

A Call To Action Please permit me to offer my compliments on the outstanding summer issue of SEA HISTORY (SH 44) . The articles on both US and British naval history are excellent. Reading of the numerous ship preservation projects and the new , emerging sense of history within the US Navy gives renewed hope for salvaging the gracious steamship Alexander Hamilton, which is now on the National Register but foundered on Navy property. Many of us who worked together as the Alexander Hamilton Society , went on to found the Hudson River Maritime Center

in the hope that it might one day become, among other things, a home for as much of the Hamilton as may prove salvageable. Let us hope that the Navy does not act in a manner unworthy of its great traditions and allow legalistic and bureaucratic consideration to stand in the way of preserving the hull, engines and paddle wheels of the Hamilton. An adequate and loving home is waiting for the gracious White Swan of the Hudson and willing hands stand ready to undertake restoration . ARTHUR G. ADAMS Founding President Hudson River Maritime Center Kingston , New York

My grandfather, Captain Michael Francis Hogan , was the owner and master of the Ruth M. Martin, a vessel out of Gloucester, Massachusetts, prior to the tum of the century . He is mentioned in Edward Rowe Snow &#39; s book about shipwrecks on the East Coast as being the last person to have seen the Portland, the ill-fated ferry that went down with all hands in the winterof 1898. I know a great deal about my grandfather from Mr. Snow&#39;s work but I would appreciate any information about the history of his vessel, the Ruth M. Martin. LEO J . GULLAGE Northwestern Mutual Life 5709 Crafton Drive Lakeland, FL 33805

No Stonewalling Here A number of readers wrote to point out that in the lead article of SEA HISTORY 43 , &quot;The Rivers of America ,&quot; we incredibly (to us) mixed up the nicknames of Andrew Jackson and Thomas Jonathan Jackson . Andrew Jackson, the hero of the Battle of New Orleans in 18 15 and later the President of the United States, was popularly known as &quot; Old Hickory .&quot; It was the later Jackson who , at the first battle of Manassas in 186 1, earned the moniker &quot; Stonewall. &quot;

In connection with Lincoln Paine&#39;s article on the opening of the Columbia River and the painting of George Davidson (also SH43) , we (again inexplicably) misstated the provenance of the works reproduced . They were used by permission of the Columbia Maritime Museum in Astoria, Oregon. In Ed Dennis&#39;s &quot; The Oldest Ship in the War&quot; (SEA HISTORY 44) , we misspelled the name of General Douglas MacArthur. But maybe he was right when he said , &#39; &#39;Old soldiers never die; they just fade away.&quot; No one seemed to notice.- Eo . J,