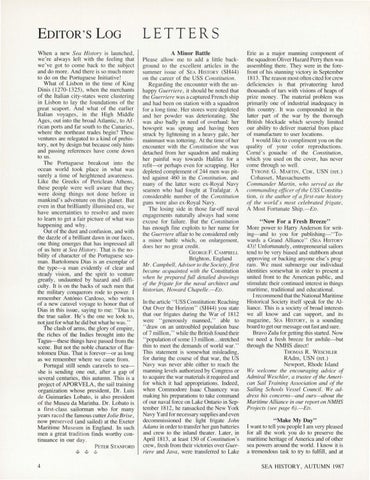 EDITOR&#39;S LOG When a new Sea History is launched, we&#39; re always left with the fee ling that we&#39;ve got to come back to the subject and do more. And there is so much more to do on the Portuguese Initiati ve! What of Lisbon in the time of King Dini s (1 270- 1325), when the merchants of the Italian c ity-states were clustering in Li sbon to lay the fo undations of the great seaport . And what of the earlier Italian voyages, in the High Middle Ages, out into the broad Atlantic, to African ports and far south to the Canaries, where the northeast trades begin? These ventures are relegated to a kind of prehistory , not by design but because onl y hints and passing references have come down to us. The Portu guese breakout into the ocean world took place in what was sure ly a time of he ightened awareness. Like the Greeks of Periclean Athens, these people were well aware that they were do ing things not done before in mankind &#39;s adventure on thi s pl anet. But even in that brilliantl y illumined era, we have uncertainties to resolve and more to learn to get a fa ir picture of what was happening and why. Out of the dust and confusion, and with the dazzle of a brilliant dawn in our faces , one thing emerges that has impressed all of us here at Sea History. That is the nobility of character of the Portuguese seaman. Bartolomeu Dias is an exemplar of the type-a man evidentl y of clear and steady vision, and the spirit to venture greatl y, undaunted by hazard and difficulty. It is on the backs of such men that the military conquerors rode to power. I remember Antonio Cardoso, who writes of a new caravel voyage to honor that of Dias in this issue, saying to me: &quot; Dias is the true sailor. He&#39;s the one we look to, not j ust for what he did but what he was.&#39; &#39; The clash of arms, the glory of empire, the riches of the Indies brought into the Tagus-these things have passed from the scene. But not the noble character of Bartolomeu Dias. That is forever--0r as long as we remember where we came fro m. Portugal still sends caravels to seashe is sending one out, after a gap of several centuries , thi s autumn . This is a project of APORVELA , the sail tra ining organi zation whose president, Dr. Luis de Guimaraes Lobato , is also president of the Museu da Marinha. Dr. Lobato is a first-class sailorman who for many yearsÂˇ raced the famous cutter Jolie Brise, now preserved (and sailed) at the Exeter Maritime Museum in England . In such. men a great tradition find s worth y continuance in our day. PETER STANFORD

LETTERS A Minor Battle Please allow me to add a little background to the excellent articles in the summer issue of SEA HISTORY (SH44) on the career of the USS Constitution . Regard ing the encounter with the unhappy Guerriere, it should be noted that the Guerriere was a captured French shi p and had been on station with a squadron fo r a long time. Her stores were depleted and her powder was deteriorating. She was also badl y in need of overhaul : her bowsprit was sprung and having been struck by lightening in a heavy gale, her mainmast was tottering. At the time of her encounter with the Constitution she was detached fro m her squadron and making her painfu l way towards Halifax for a refit--0r perhaps even for scrapping. Her depleted complement of 244 men was pitted agai nst 460 in the Constitution , and many of the latter were ex-Royal Navy seamen who had fo ught at Trafalgar. A considerable number of the Constitution guns were also ex-Royal Navy. The losing side in those far-off naval engagements naturally always had some excuse fo r fa ilure. But the Constitution has enough fine exploits to her name for the Guerriere affair to be considered only a minor battle which, on enlargement, does her no great credit . GEORGEF. CAMPBELL Brighton, England Mr. Campbell, Advisor to the Society, first became acquainted with the Constitution when he prepared full detailed drawings of the frigate for the naval architect and historian, Howard Chapelle.-Eo. In the article &quot; USS Constitution: Reaching Out Over the Horizon&quot; (S H44) you state that our frigates duri ng the War of 18 12 were &quot;generously manned, &quot; able to &quot; draw on an untroubled population base of 7 million,&#39;&#39; while the British fo und their &#39;&#39; population of some 13 million . ..stretched thin to meet the demands of world war.&quot; This statement is somewhat misleading, for during the course of that war, the US Navy was never able either to reach the manning levels authorized by Congress or to acquire the war materials it req ui red and for which it had appropriations. Indeed, when Commodore Isaac Chauncey was making his preparations to take command of our naval force on Lake Ontario in September 18 12, he ransacked the New York Navy Yard for necessary supplies and even decommissioned the light fri gate John Adams in order to transfer her gun batteries and crew to the inland theater. Later, in April 1813, at least 150 of Constitution&#39;s crew, fresh from their victories over Guerriere and Java, were transferred to Lake

Erie as a major manning component of the squadron Oliver Hazard Perry then was assembling there. They were in the forefro nt of his stunning victory in September 18 13. The reason most often cited for crew deficiencies is that privateering lured thousands of tars with visions of heaps of pri ze money. The material problem was primarily one of industrial inadequacy in this country. It was compounded in the latter part of the war by the thorough British blockade which severely limited our ability to deliver material from place of manufacture to user locations. I would like to compliment yo u on the quality of yo ur color reproducti ons. Corne&#39;s gouache of the Constitution, which you used on the cover, has never come through so well. TYRONE G. MARTIN, CoR , US N (ret.) Cohasset, Massachusetts Commander Martin, who served as the commanding officer of the USS Constitution, is the author of a fi rst-rate history of the world&#39;s most celebrated frigate, A Most Fortunate Ship.-ÂŁ0.

&quot; Now For a Fresh Breeze&quot; More power to Harry Anderson for writing-and to you for publishing- &quot;Towards a Grand Alliance&quot; (SE/\ HISTORY 43) ! Unfortunately, entrepreneurial sailors tend to be very biased and stubborn about approving or backing anyone else&#39;s program. We must submerge our individual identities somewhat in order to present a united front to the American public, and stimulate their continued interest in things mari time, traditional and educational. I recommend that the National Maritime Historical Society itself speak for the Alliance. This is a society of broad interests we all know and can support , and its magazine, SEA HISTORY, is a sounding board to get our message out fast and sure . Bravo Zulu for getting this started. Now we need a fresh breeze for awhile-but through the NMHS direct! THOMAS R. WESCHLER RAd m, USN (ret. ) Newport, Rhode Island We welcome the encouraging advice of Admiral Wesch/er, a trustee of the American Sail Training Association and of the Sailing Schools Vessel Council. We address his concerns-and ours-about the Maritime Alliance in our report on NMHS Projects (see page 6).-Eo.

&quot; Make My Day&quot; I want to tell you people I am very pleased for all the work you do to preserve the maritime heritage of America and of other sea powers around the world . I know it is a tremendous task to try to fulfill , and at SEA HISTORY , AUTUMN 1987