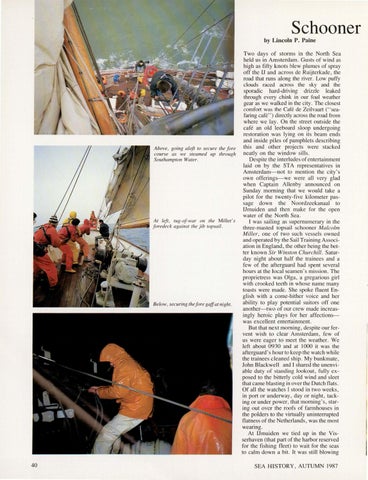 Below, securing the fore gaffat nigh!.

Two days of storms in the North Sea held us in Amsterdam. Gusts of wind as high as fifty knots blew plumes of spray off the JJ and across de Ruijterkade, the road that runs along the river. Low puffy clouds raced across the sky and the sporadic hard-driving drizzle leaked through every chink in our faul weather gear as we walked in the city . The closest comfort was the Cafe de Zeilvaart ("seafaring cafe") directly across the road from where we lay. On the street outside the cafe an old leeboard sloop undergoing restoration was lying on its beam ends and inside piles of pamphlets describing this and other projects were stacked neatly on the window sills. Despite the interludes of entertainment laid on by the STA representatives in Amsterdam-not to mention the city's own offerings-we were all very glad when Captain Allenby announced on Sunday morning that we would take a pilot for the twenty-five kilometer passage down the Noordzeekanaal to JJmuiden and then make for the open water of the North Sea. I was sai ling as supernumerary in the three-masted topsail schooner Malcolm Miller , one of two such vessels owned and operated by the Sail Training Association in England, the other being the better known Sir Winston Churchill. Saturday night about half the trainees and a few of the afterguard had spent several hours at the local seamen's mission . The proprietress was Olga , a gregarious girl with crooked teeth in whose name many toasts were made . She spoke fluent English with a come-hither voice and her abi lity to play potential suitors off one another-two of our crew made increasingly heroic plays for her affectionswas excellent entertainment. But that next morning, despite our fervent wish to clear Amsterdam, few of us were eager to meet the weather. We left about 0930 and at I 000 it was the afterguard's hour to keep the watch while the trainees cleaned ship. My bunkmate, John Blackwell and I shared the unenviable duty of standing lookout , fully exposed to the bitterly cold wind and sleet that came blasting in over the Dutch flats . Of all the watches I stood in two weeks, in port or underway, day or night , tacking or under power, that morning 's, staring out over the roofs of farmhouses in the polders to the virtually uninterrupted flatness of the Netherlands , was the most wearing. At IJmuiden we tied up in the Yisserhaven (that part of the harbor reserved for the fishing fleet) to wait for the seas to calm down a bit. It was still blowing SEA HISTORY , AUTUMN 1987