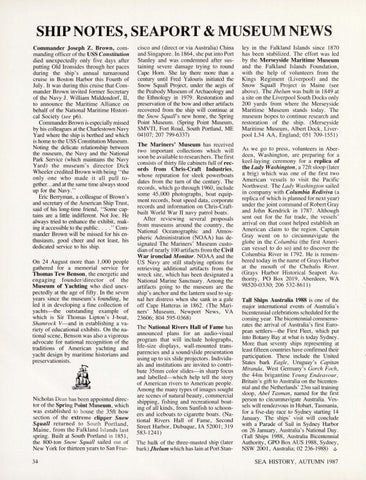 SHIP NOTES, SEAPORT &amp; MUSEUM NEWS Commander Joseph Z. Brown, commanding officer of the USS Constitution died unexpectedly only five days after putting Old Ironsides through her paces during the ship&#39;s annual turnaround cruise in Boston Harbor this Fourth of July . It was during this cruise that Commander Brown invited former Secretary of the Navy J. William Middendorf, II , to announce the Maritime Alliance on behalf of the National Maritime Historical Society (see p6) . Commander Brown is especially missed by his colleagues at the Charlestown Navy Yard where the ship is berthed and which is home to the USS Constitution Museum . Noting the delicate relationship between the museum , the Navy and the National Park Service (which maintains the Navy Yard) the museum &#39; s director Dick Wheeler credited Brown with being &quot; the only one who made it all pull together. .. and at the same time always stood up for the Navy.&quot; Eric Berryman, a colleague of Brown&#39;s and secretary of the American Ship Trust, said of his long-time friend, &quot;Some captains are a little indifferent. Not Joe. He always tried to enhance the exhibit, making it accessible to the public .... &#39;&#39; Commander Brown will be missed for his enthusiasm , good cheer and not least, his dedicated service to his ship. On 24 August more than 1,000 people gathered for a memorial service for Thomas Tew Benson , the energetic and engaging founder/director of the Museum of Yachting who died unexpectedly at the age of fifty. In the seven years since the museum &#39;s fo unding, he led it in developing a fine collection of yachts-the outstanding example of which is Sir Thomas Lipton&#39; s J-boat , Shamrock V-and in establishing a variety of educational exhibits. On the national scene, Benson was also a vigorous advocate for national recognition of the traditions of American yachting and yacht design by maritime historians and preservationists.

Nicholas Dean has been appointed director of the Spring Point Museum , which was established to house the 35ft bow section of the extreme clipper Snow Squall returned to South Portland, Maine , from the Falkland Islands last spring. Built at South Portland in 185 I, the 800-ton Snow Squall sailed out of New York for thirteen years to San Fran34

cisco and (direct or via Australia) China and Singapore. In 1864, she put into Port Stanley and was condemned after sustaining severe damage trying to round Cape Hom . She lay there more than a century until Fred Yalouris initiated the Snow Squall Project, under the aegis of the Peabody Museum of Archaeology and the Ethnology in 1979. Restoration and preservation of the bow and other artifacts recovered from the ship will continue at the Snow Squall&#39;s new home , the Spring Point Museum . (Spring Point Museum , SMVTI, Fort Road, South Portland , ME 04107 ; 207 799-6337) The Mariners&#39; Museum has received two important collections which will soon be available to researchers. The first consists of thirty file cabinets full of records from Chris-Craft Industries , whose reputation for sleek powerboats dates from the turn of the century. The records , which go through 1960, include some 45,000 photographs , boat equipment records , boat speed data , corporate records and information on Chris-Craftbuilt World War II navy patrol boats. After reviewing several proposals from museums around the country, the National Oceanographic and Atmospheric Administration (NOAA) has designated The Mariners &#39; Museum custodian of nearly 100 artifacts from the Civil War ironclad Monitor. NOAA and the US Navy are still studying options for retrieving additional artifacts from the wreck site, which has been designated a National Marine Sanctuary. Among the artifacts going to the museum are the ship&#39;s anchor and the lantern used to signal her distress when she sank in a gale off Cape Hatteras in 1862. (The Mariners &#39; Museum, Newport News , VA 23606; 804 595-0368) The National Rivers Hall of Fame has announced plans for an audio-visual program that will include holographs, life-size displays, wall-mounted transparencies and a sound/slide presentation using up to six slide projectors. Individuals and institutions are invited to contribute 35mm color slides-in sharp focus and labelled-which help tell the story of American rivers to American people. Among the many types of images sought are scenes of natural beauty, commercial shipping, fishing and recreational boating of all kinds , from Sunfish to schooners and iceboats to cigarette boats. (National Rivers Hall of Fame, Second Street Harbor, Dubuque , IA 52001; 319 583-1241) The hulk of the three-masted ship (later bark) Jhelum which has lain at Port Stan-

ley in the Falkland Islands since 1870 has been stabilized. The effort was led by the Merseysi~e Maritime Museum and the Falkland Islands Foundation, with the help of volunteers from the Kings Regiment (Liverpool) and the Snow Squall Project in Maine (see above). The Jhelum was buiit in 1849 at a site on the Liverpool South Docks only 200 yards from where the Merseyside Maritime Museum stands today. The museum hopes to continue research and restoration of the ship. (Merseyside Maritime Museum, Albert Dock, Liverpool L34 AA, England; 051 709-1551) As we go to press, volunteers in Aberdeen, Washington, are preparing for a keel-laying ceremony for a replica of the Lady Washington , a 72ft sloop (later a brig) which was one of the first two American vessels to visit the Pacific Northwest. The Lady Washington sailed in company with Columbia Rediviva (a replica of which is planned for next year) under the joint command of Robert Gray and John Kendrick in 1787. Although sent out for the fur trade, the vessels&#39; arrival on that coast helped establish an American claim to the region. Captain Gray went on to circumnavigate the globe in the Columbia (the first American vessel to do so) and to discover the. Columbia River in 1792. He is remembered today in the name of Grays Harbor at the mouth of the Chehalis River. (GraysÂˇ Harbor Historical Seaport Authority , PO Box 2019, Aberdeen , WA 98520-0330; 206 532-8611) Tall Ships Australia 1988 is one of the major international events of Australia&#39;s bicentennial celebrations scheduled for the coming year. The bicentennial commemorates the arrival of Australia&#39;s first European settlers-the First Fleet, which put into Botany Bay at what is today Sydney. More than seventy ships representing at least fifteen countries have confirmed their participation. These include the United States bark Eagle, Uruguay&#39;s Capitan Miranda, West Germany&#39;s Gorch Foch, the 44m brigantine Young Endeavour, Britain &#39;s gift to Australia on the bicentennial and the Netherlands &#39; 23m sail training sloop, Abel Tasman, named for the first person to circumnavigate Australia. Vessels will rendezvous in Hobart, Tasmania, for a fi\ie-day race to Sydney starting 14 January. The ships&#39; visit will conclude with a Parade of Sail in Sydney Harbor on 26 January , Australia&#39;s National Day. (Tall Ships 1988 , Australia Bicentennial Authority, GPO Box AUS 1988 , Sydney, NSW 2001, Australia; 02 236-1988) .t SEA HISTORY , AUTUMN 1987