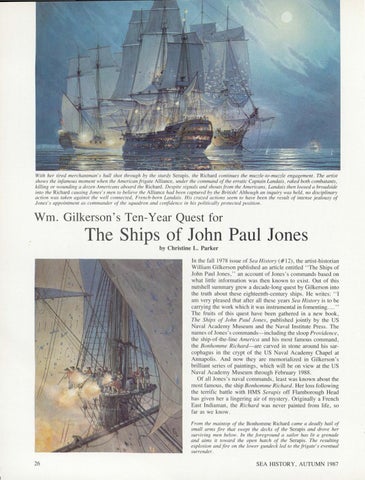 With her tired merchantman&#39;s hull shot through by the sturdy Serapis, the Richard continues the muzzle-to-muzzle engagement. The artist shows the infamous moment when the American frigate Alliance, under the command of the erratic Captain Landais, raked both combatants, killing or wounding a dozen Americans aboard the Richard. Despite signals and shouts from the Americans, Landais then loosed a broadside into the Richard causing Jones&#39; s men to believe the Alliance had been captured by the British! Although an inquiry was held, no disciplinary action was taken against the well connected, French-born Landais. His crazed actions seem to have been the result of intense jealousy of Jones&#39; s appointment as commander of the squadron and confidence in his politically protected position.

The Ships of John Paul Jones by Christine L. Parker In the fall 1978 issue of Sea History (#12), the artist-historian William Gilkerson published an article entitled &quot;The Ships of John Paul Jones,&quot; an account of Jones&#39;s commands based on what little information was then known to exist. Out of this nutshell summary grew a decade-long quest by Gilkerson into the truth about these eighteenth-century ships. He writes: &quot; I am very pleased that after all these years Sea History is to be carrying the work which it was instrumental in fomenting .... &#39;&#39; The fruits of this quest have been gathered in a new book, The Ships of John Paul Jones , published jointly by the US Naval Academy Museum and the Naval Institute Press . The names of Jones&#39;s commands-including the sloop Providence, the ship-of-the-line America and his most famous command, the Bonhomme Richard-are carved in stone around his sarcophagus in the crypt of the US Naval Academy Chapel at Annapolis. And now they are memorialized in Gilkerson&#39;s brilliant series of paintings , which will be on view at the US Naval Academy Museum through February 1988. Of all Jones&#39;s naval commands, least was known about the most famous, the ship Bonhomme Richard. Her loss following the terrific battle with HMS Serapis off Flamborough Head has given her a lingering air of mystery. Originally a French East Indiaman , the Richard was never painted from life, so far as we know. From the maintop of the Bonhomme Richard came a deadly hail of small arms fire that swept the decks of the Serapis and drove her surviving men below. In the foreground a sailor has lit a grenade and aims it toward the open hatch of the Serapis . The resulting explosion and fire on the lower gundeck led to the frigate&#39;s eventual surrender.