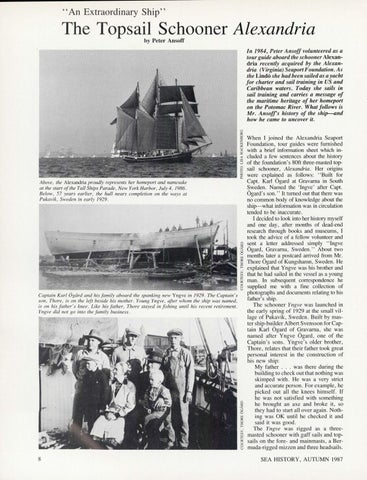 In 1984, Peter Ansoff volunteered as a tour guide aboard the schooner Alexandria recently acquired by the Alexandria (Virginia) Seaport Foundation. As the Lindo she had been sailed as a yacht for charter and sail training in US and Caribbean waters. Today she sails in sail training and carries a message of the maritime heritage of her homeport on the Potomac River. What follows is Mr. Ansoff&#39;s history of the ship-and how he came to uncover it. 0

When I joined the Alexandria Seaport ~ . &quot;&#39; Foundation , tour guides were furnished ~ with a brief information sheet which in:i:: ;:.&#39;i eluded a few sentences about the history : : ; of the foundation&#39; s 80ft three-masted top~ sail schooner, Alexandria. Her origins 15:: were explained as follows: &quot; Built for Capt. Karl Ogard at Gravarna in South Above, the Alexandria proudly represents her homeport and namesake Sweden. Named the &#39;Ingve&#39; after Capt. at the start of the Tall Ships Parade, New York Harbor , July 4, 1986 . Ogard&#39; s son. &quot; It turned out that there was Below, 57 years earlier, the hull nears completion on the ways at Pukavik, Sweden in early 1929. no common body of knowledge about the ship-what information was in circulation tended to be inaccurate. I decided to look into her history myself and one day , after months of dead-end research through books and museums, I took the advice of a fellow volunteer and ::2 sent a letter addressed simply &quot; Ingve (§ Ogard , Gravarna, Sweden.&quot; About two ·~ months later a postcard arrived from Mr. gs:i:: Thore Ogard of Kungshamn, Sweden. He f- explained that Yngve was his brother and ,: ~ that he had sailed in the vessel as a young ~ man. In subsequent correspondence he 8 supplied me with a fine collection of photographs and documents relating to his Captain Karl Ogard and his family aboard the spanking new Yngve in 1929 . The Captain&#39;s father&#39;s ship . son , Thore, is on the left beside his mother. Young Yngve, after whom the ship was named, The schooner Yngve was launched in is on his father&#39;s knee. Like his father, Thore stayed in fishing until his recent retirement. the early spring of 1929 at the small vilYngve did not go into the family business. lage of Pukavik , Sweden. Built by master ship-builder Albert Svensson for Captain Karl Ogard of Gravarna, she was named after Yngve Ogard, one of the Captain &#39;s sons. Yngve&#39;s older brother, Thore, relates that their father took great personal interest in the construction of his new ship: My father . . . was there during the building to check out that nothing was skimped with. He was a very strict and accurate person . For example, he picked out all the knees himself. If he was not satisfied with something he brought an axe and broke it, so they had to start all over again. Noth~ ing was OK until he checked it and §? said it was good . ~ The Yngve was rigged as a three~ masted schooner with gaff sails and top~ sails on the fore- and mainmasts , a Ber8 muda-rigged mizzen and three headsails .