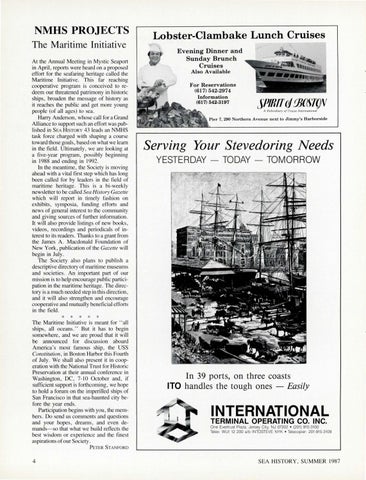 NMHS PROJECTS The Maritime Initiative At the Annual Meeting in Mystic Seaport in April , reports were heard on a proposed effort for the seafaring heritage called the Maritime Initiative. This far reaching cooperati ve program is conceived to redeem our threatened patrimony in historic ships, broaden the message of history as it reaches the public and get more young people (of all ages) to sea. Harry Anderson, whose call for a Grand Alliance to support such an effort was published in SEA HISTORY 43 leads an NM HS task force charged with shaping a course toward those goals, based on what we learn in the field . Ultimately, we are looking at a five-year program , possibly beginning in 1988 and ending in 1992 . In the meantime , the Society is moving ahead with a vital first step which has long been called for by leaders in the field of maritime heritage. This is a bi-weekly newsletter to be called Sea History Gazette which will report in timely fas hion on exhibits, symposia, funding efforts and news of general interest to the communi ty and giving sources of further information. It will also provide listings of new books , videos, recordings and periodicals of interest to its readers. Thanks to a grant from the James A. Macdonald Foundation of New York, publication of the Gazette will begin in July . The Soc iety also plans to publish a descripti ve directory of maritime museums and societies. An important part of our mission is to help encourage pu blic participation in the maritime heritage . The directory is a much needed step in this direction, and it will also strengthen and encourage cooperati ve and mutually benefi cial efforts in the field .

The Maritime Initiati ve is meant for &quot; all ships, all oceans.&quot; But it has to begin somewhere, and we are proud that it will be announced for discussion _aboard America&#39;s most famous ship , the USS Constitution , in Boston Harbor this Fourth of July. We shal l also present it in cooperation with the National Trust fo r Historic Preservation at their annual conference in Washington, DC , 7- 10 October and , if sufficient support is fo rthcoming, we hope to hold a fo rum on the imperilled ships of San Francisco in that sea-haunted city before the year ends. Participation begins with you, the members . Do send us comments and questions and your hopes, dreams, and even demands-so that what we build refl ects the best wisdom or experience and the finest aspirations of our Society. PETER STAN FORD

In 39 ports, on three coasts ITO handles the tough ones - Easily