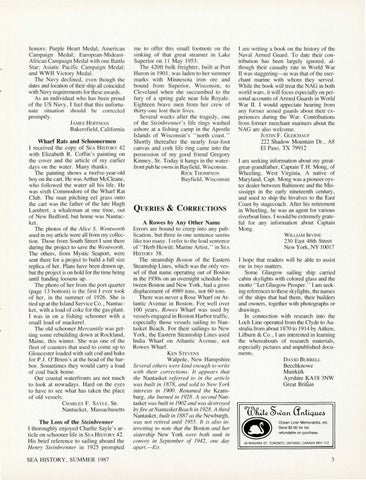 honors: Purple Heart Medal; American Campaign Medal; European-MideastAfrican Campaign Medal wi th one Battle Star; Asiatic Pacific Campaign Medal; and WWII Victory Medal. The Navy declined , even though the dates and location of their ship al l coincided with Navy requirements for these awards . As an indi vidual who has been proud of th e US Navy, I fee l th at thi s unfortunate situati on should be corrected promptl y. JAMES HOFFMAN Bakersfi eld , California

Wharf Rats and Schoonermen I received the copy of SEA HISTORY 42 with Elizabeth R. Coffin &#39;s painting on the cover and the article of my earlier days on the water. Man y th anks . The painting shows a twelve-year-old boy on the cart. He was Arthur McCleane, who followed the water all hi s li fe . He was sixth Commodore of the Wharf Rat Club. The man pitching eel grass onto the cart was the father of the late Hugh Lambert , a whaleman at one time , out of New Bedford ; but home was Nantucket. The photos of the Alice S. Wentworth used in my art.icle were all from my collection . Those from South Street I sent there during the project to save the Wentworth. The others, from Mysti c Seaport, were sent there for a project to build a full size replica of her. Plans have been drawn up , but the project is on hold for the time be ing unti l fundin g loosens up . The photo of her from the port quarter (page 13 bottom) is the first I ever took of her, in the summer of 1926 . She is tied up at the Island Service Co., Nantucket , with a load of coke for the gas plant. T was in on a fi shing schooner with a small load of mackerel. The old schooner Mercantile was getting some rebuilding down at Rockland , Maine , thi s winter. She was one of the fleet of coasters that used to come up to Gloucester loaded with salt cod and hake for P.J . O&#39;Brien &#39; s at the head of the harbor. Sometimes they would carry a load of coal back home . Our coastal waterfronts are not much to look at nowadays . Hard on the eyes to have to see what has taken the place of old vessels. CHARLES F. SAYLE, SR . Nantucket, Massachusetts

The Loss of the Steinbrenner I thorou ghl y enjoyed Charlie Sayle &#39; s article on schooner life in SEA HISTORY 42. His brief reference to sailing aboard the Henry Steinbrenner in 1925 prompted SEA HISTORY , SUMMER 1987

me to offer this small footnote on the sinking of that great steamer in Lake Superior on 11 May 1953. The 420ft bulk freighter , built at Port Huron in 190 I , was laden to her summer marks with Minnesota iron ore and bound from Superior, Wisconsin, to Cleveland when she succumbed to the fury of a spring gale near Isle Royale. Eighteen brave men from her crew of thirty-one lost their li ves. Several weeks after the tragedy , one of the Steinbrenner&#39; s life rings washed as hore at a fishing camp in the Apos tle Islands of Wisconsin &#39; s &quot; north coast. &quot; Shortly th ereafter the nearl y four-foo t canvas and cork life ring came in to the possession of my good friend Gregory Kinney, Sr. Today it hangs in th e waterfron t pub he owns in Bayfield , Wisconsin. RJCK THOMPSON Bayfield , Wisconsin

QUERIES &amp; CORRECTIONS A Rowes by Any Other Name Errors are bound to creep into any publicati on , but three in one sente nce seems like too many. J refer to the lead sentence of &#39; &#39; Herb Hewitt : Marine Artist ,&#39;&#39; in SEA HISTORY 38. The steamship Boston of the Eastern Steamship Lines, which was the onl y vessel o f that name operating out of Boston in the 1930s on an overnight schedule between Boston and New York , had a gross displacement of 4989 tons , not 60 tons. There was never a Rose Wharf on Atlantic Avenue in Boston. Fo~ well over 100 years, Rowes Wharf was used by vessels engaged in Boston Harbor traffic, es pec iall y th ose vessels sailing to Nantasket Beach . For the ir sailings to New York, the Eastern Steamship Lines used India Wharf on Atlantic Avenue , not Rowes Wharf. KEN STEVENS Walpole , New Hampshire

Several others were kind enough to write with their corrections. It appears that the Nantasket referred to in the article was built in 1878, and sold to New York interests in 1900. Renamed the Keansburg, she burned in 1928. A second Nantas ket was built in 1902 and was destroyed by fire at Nantasket Beach in 1928. A third Nantasket, built in 1887 as the Newburgh, was not retired until 1955. It is also interesting to note that the Boston and her sistership New York were both sunk in convoy in September of 1942 , one day apart.- Eo.

I am wri ting a book on the history of the Naval Armed Guard. To date their contribution has been largely ignored , although their casualty rate in World War II was staggering-as was that of the merchant marine with whom they served . While the book wi ll treat the NAG in both world wars , it will foc us especiall y on personal accounts of Armed Guards in World War II . I would appeciate hearing from any fo rmer armed guards about their experience&#39;s during the War. Contributions from fo rmer merchant mariners about the NAG are also welcome. JUSTIN F. GLEICHAUF 222 Shadow Mountain Dr., A8 El Paso , TX 79912 l am seeking information about my greatgreat-grandfather, Captain T.H. Mong, of Wheeling, West Virginia. A nati ve of Maryland, Capt. Mong was a pioneer oyster dealer between Baltimore and the Mi ssissippi in the early nineteenth century , and used to ship the bivalves to the East Coast by stagecoach. After his retirement in Wheeling , he was an agent for various riverboat lines. I would be extremely grateful fo r any inforniation about Captain Mong. WI LLIAM IRVINE 230 East 48th Street New York, NY 1001 7 I hope that readers will be able to ass ist me in two matters. SomeÂˇ Glasgow sailing ship carried cabin skylights with colored glass and the motto &quot; Let Glasgow Prosper. &quot; I am seeking references to these skylights, the names of the ships that had them , their builders and owners, together with photographs or drawings. In connection with research into the Loch Line operated from the Clyde to Australia from about 1870 to 1914 by Aitken, Lilburn &amp; Co . , I am interested in learning the whereabouts of research materi als , especially pictures and unpublished documents. DAVID BURRELL Beechknowe Muirkirk Ayrshire KA 18 3NW Great Britain