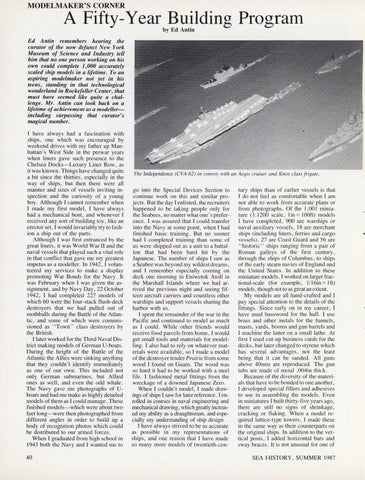 Ed Antin remembers hearing the curator of the now defunct Ne w York Museum of Science and Industry tell him that no one person working on his own could complete 1,000 accurately scaled ship models in a lifetime. To an aspiring mode/maker not yet in his teens, standing in that technological wonderland in Rockefeller Center, that must have seemed like quite a challenge. Mr. Antin can look back on a lifetime of achievement as a modellerincluding surpassing that curator&#39;s magical number. I have always had a fasc ination with ships, one which was encouraged by weekend dri ves with my fa ther up Manhattan&#39;s West Side in the prewar years when liners gave such presence to the Che lsea Docks-Luxury Liner Row , as it was known. Things have changed quite a bit since the thirties, especiall y in the way of ships , but then there were all manner and sizes of vessels inviting inspection and the curios ity of a youn g boy . Although I cannot re member when I made my first mode l, l have always had a mechanical bent , and whenever I received any sort of building toy, like an erector set, I would in variably try to fas hion a ship out of the parts. Although I was fi rst entranced by the great liners , it was World War 11 and the naval vessels that played such a vital ro le in that conflict that gave me my greatest impetus as a modeller. In 1942 , I volunteered my services to make a display promoting War Bonds fo r the Navy. lt was February when I was give n the assignment , and by Navy Day , 22 October 1942, I had completed 227 models of which 60 were the fo ur-stack flu sh-deck destroyers that we had pulled out of moihball s during the Battle of the Atlantic, and some of which were commissioned as &quot; Town&quot; cl ass destroyers by the British. I later worked fo r the Thi rd Naval District making models of German U-boats. During the height of the Battle of the Atlantic the Allies were sinking anything that they couldn &#39; t identify immediate ly as one of our own . This included not onl y German submarines , but Allied ones as well , and even the odd whale. The Navy gave me photographs of Uboats and had me make as highl y detailed models of them as l could manage . These fini shed models-which were about two feet long-were then photographed from different angles in order to build up a body of recognition photos which could be di stributed to our armed forces. When I graduated from high school in 1943 both the Navy and I wanted me to 40

The Independence (CVA-62) in convoy with an Aegis cruiser and Knox class f rigate.

go into the Special Devices Section to continue work o n thi s and similar projects. But the day l e nli sted , the recrui ters happened to be tak ing people onl y fo r the Sea bees , no matter what one &#39; s preference. I was ass ured that I could transfer into the Navy at some point , when l had fini shed basic tra ining . But no sooner had I completed training than some of us were shipped out as a unit to a battalion that had been hard hit by the Japanese. T he number of ships I saw as a Seabee was beyond my wildest dreams, and I remember especiall y coming on deck one mornin g in Eni wetok Atoll in the Marshall Islands where we had arrived the prev ious night and seeing fi fteen aircraft carriers and countless other warships and support vessels sharin g the harbor with us. I spent the re mainder of the war in the Pacific and continued to model as much as I could . While other fri ends wo uld receive food parcels fro m home, l would get small tools and materials fo r modelling . I also had to re ly on whatever materi als were ava il able , so l made a mode l of the destroyer tender Prairie fro m some wood l foun d on Guam . The wood was so hard it had to be worked with a steel fil e. I fas hioned metal fittings from the wreckage of a downed Japanese Zero. When I couldn &#39; t model, l made drawings of ships l saw for later reference . l enrolled in courses in naval engineering and mechanical drawing, which greatly increased my ability as a draughtsman , and especiall y my understanding of ship design. I have always strived to be as acc urate as poss ible in my representati ons of ships, and one reason that I have made so many more models of twe ntieth-cen-

tu ry ships than of earlier vessels is that I do not feel as comfo rtable when I am not able to work from acc urate pl ans or from photographs. Of the 1,001 min iature ( 1: 1200 scale, I in = I OOft) models l have completed, 900 are wars hips or naval auxiliary vessels, 18 are merchant ships (includ ing liners, ferries and cargo vesse ls), 27 are Coast Guard and 56 are &quot; hi storic&quot; ships ranging fro m a pair of Roman galleys of the first century , th ro ugh the ships of Columbus, to shi ps of the earl y steam navies of Eng land and the United States . In addition to these miniature models, I worked on larger fractional-scale (for example, II I 6in = 1ft) models, though not to as great an extent. My mode ls are all hand-crafted and I pay spec ial attention to the detail s of the fi ttings . Since earl y on in my career, I have used basswood fo r the hull. I use brass and other metals for the funne ls, masts , yards, booms and gun barrels and I machine the latter on a small lathe. At fi rst I used c ut-up business cards fo r the decks , but later changed to styrene which has several advantages , not the least bei ng that it can be sanded . All guns above 40mm are reproduced . The gun tubs are made of metal .004in thick . Because of the di versity of the materials that have to be bonded to one another, I developed special fill ers and adhesives to use in asse mbling the mode ls. Even in miniatures I built thirty-fi ve years ago , there are still no signs of shrinkage, cracki ng or fl akin g. When a model required lattice-type towers, I made these in the same way as the ir counterparts on the original ships. In addi tion to the vertical posts, 1 added hori zontal bars and sway braces . It is not unusual fo r one of SEA HISTORY , SUMMER 1987