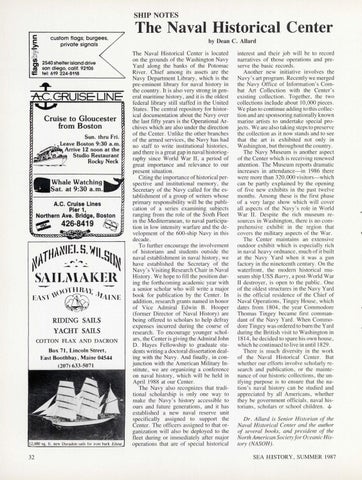 by Dean C. Allard The Naval Historical Center is located on the grounds of the Washington Navy Yard along the banks of the Potomac River. Chief among its assets are the Navy Department Library , which is the pre-eminent library for naval history in the country. It is also very strong in general maritime history, and it is the oldest federal library still staffed in the United States. The central repository for historical documentation about the Navy over the last fifty years is the Operational Archives which are also under the direction of the Center. Unlike the other branches of the armed services , the Navy has had no staff to write institutional histories , and there is a great gap in naval historiography since World War II, a period of great importance and relevance to our present situation. Citi ng the importance of historical perspective and institutional memory , the Secretary of the Navy called for the establi shment of a group of writers whose primary responsibility will be the publication of a series examining subjects ranging from the role of the Sixth Fleet in the Mediterranean , to naval participation in low intensity warfare and the development of the 600-ship Navy in this decade. To further encourage the involvement of historians and students outside the naval establishment in naval history, we have established the Secretary of the Navy &#39; s Visiting Research Chair in Naval History. We hope to fill the position during the forthcoming academ ic year with a senior scholar who will write a major book for publication by the Center. In addition , research grants named in honor of Vice Admiral Edwin B . Hooper (former Director of Naval History) are being offered to scholars to help defray expenses incurred during the course of research . To encourage younger scholars, the Center is giving the Admiral John D. Hayes Fellowship to graduate students writing a doctoral dissertation dealing with the Navy . And finally , in conjunction with the American Military Institute , we are organizing a conference on naval history , which will be held in Apri l 1988 at our Center. The Navy also recognizes that traditional scholarship is on ly one way to make the Navy &#39; s history accessible to ours and future generations, and it has established a new naval reserve unit specifically assigned to support the Center. The officers assigned to that organization will also be deployed to the fleet during or immediately after major operations that are of special historical

interest and their job will be to record narratives of those operations and preserve the basic records. Another new initiative involves the Navy &#39; s art program. Recently we merged the Navy Office of Information&#39;s Combat Art Collection with the Center&#39; s existing collection. Together, the two collections include about I 0 ,000 pieces. We plan to continue adding to this collection and are sponsoring nationally known marine artists to undertake special projects. We are also taking steps to preserve the collection as it now stands and to see that the art is exhibited not only in Washington , but throughout the country. The Navy Museum is another aspect of the Center which is receiving renewed attention. The Museum reports dramatic increases in attendance-in 1986 there were more than 320,000 visitors-which can be partly explained by the opening of five new exhibits in the past twelve months. Among these is the first phase of a very large show which will cover all aspects of the Navy &#39; s role in World War II. Despite the rich museum resources in Washington , there is no comprehensive exhibit in the region that covers the military aspects of the War. The Center maintains an extensive outdoor exhibit which is especially rich in naval heavy ordnance, much of it built at the Navy Yard when it was a gun factory in the nineteenth century. On the waterfront, the modern historical museum ship USS Barry, a post-World War II destroyer , is open to the public . One of the oldest structures in the Navy Yard is the offici al residence of the Chief of Naval Operations , Tingey House , which dates from 1804, the year Commodore Thomas Tingey became first commandant of the Navy Yard. When Commodore Tingey was ordered to burn the Yard during the British visit to Washington in 1814, he decided to spare his own house , which he continued to live in until 1829. There is much diversity in the work of the Naval Historical Center. But whether our efforts involve scholarly research and publication , or the maintenance of our historic collections , the unifying purpose is to ensure that the nation &#39; s naval history can be studied and appreciated by all Americans, whether they be government officials , naval historians, scholars or school children. w

Dr . Allard is Senior Historian of the Naval Historical Center and the author of several books, and president of the North American Society for Oceanic History (NASOH). SEA HllSTORY , SUMMER 1987