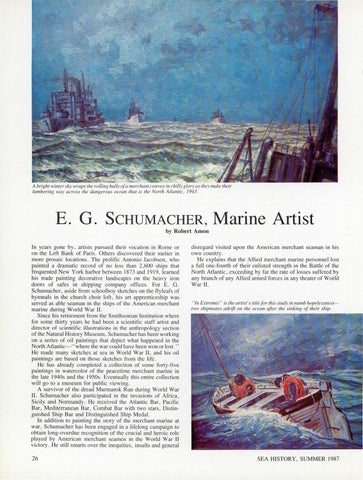 ~iiif:-~~.,,;;;;;._--A brighT winter sky wraps The rolling hulls ofa merchanT convoy in chilly glory as Th ey make their lumbering way across the dangerous ocean that is the North ATiantic, 1943.

by Robert Amon In years gone by, artists pursued the ir vocation in Rome or on the Left Bank of Paris. Others discovered their metier in more prosaic locations. The prolific Antonio Jacobsen , who painted a dramatic record of no less than 2,600 ships that frequented New York harbor between 1873 and 1919 , learned his trade painting decorative landscapes on the heavy iron doors of safes in shipping company offices. For E. G. Schumacher, aside from schoolboy sketches on the fl yleafs of hymnals in the church choir loft , hi s art apprenticeship was served as able seaman in the ships of the American merchant marine during World War II. Since his retirement from the Smithsonian Institution where for some thirty years he had been a scientific staff artist and director of scientific illustrations in the anthropology section of the Natural History Museum , Schumacher has been working on a series of oil paintings that depict what happened in the North Atlantic-&#39; &#39;where the war could have been won or lost. &quot; He made many sketches at sea in World War II, and hi s oil paintings are based on those sketches from the life . He has already completed a collection of some forty-five paintings in watercolor of the peacetime merchant marine in the late 1940s and the 1950s. Eventually this entire collection will go to a museum for publi c viewing. A survivor of the dread Murmansk Run during World War II , Schumacher also participated in the invasions of Africa , Sicily and Normandy . He received the Atlantic Bar, Pacific Bar, Mediterranean Bar, Combat Bar with two stars , Distinguished Ship Bar and Di stinguished Ship Medal. In addition to painting the story of the merchant marine at war, Schumacher has been engaged in a life long campaign to obtain long-overdue recognition of the cruc ial and heroic role played by American merchant seamen in the World War II victory . He still smarts over the inequities , insults and general 26

disregard visited upon the American merchant seaman in hi s own country . He explains that the Allied merchant marine personnel lost a full one-fourth of their enlisted strength in the Battle of the North Atlantic, exceeding by far the rate of losses suffered by any branch of any Allied armed forces in any theater of World War II. &#39;&#39; In ExTremis&#39;&#39; is the artisf&#39; s title for This sTudy in numb hopelessnesstwo shipmates adrifT on The ocean after The sinking of Their ship.