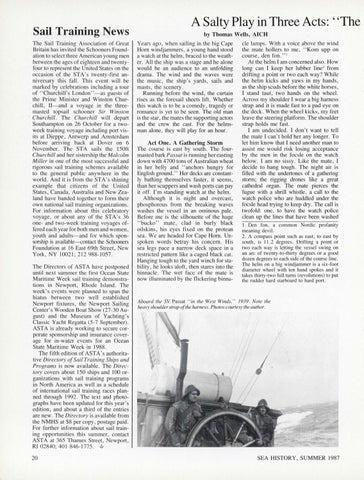 Sail Training News The Sail Training Association of Great Britain has invited the Schooners Foundation to select three American young men between the ages of eighteen and twentyfour to represent the United States on the occasion of the STA&#39;s twenty-first anniversary this fall. This event will be marked by celebrations including a tour of &quot;Churchill&#39;s London&quot;- as guests of the Prime Minister and Winston Churchill, II-and a voyage in the threemasted topsail schooner Sir Winston Churchill. The Churchill will depart Southampton on 26 October for a twoweek training voyage including port visits at Dieppe, Antwerp and Amsterdam before arriving back at Dover on 6 November. The ST A sails the l 50ft Churchill and her sistership the Malcolm Miller in one of the most successful and rigorous sail training schemes available to the general public anywhere in the world. And it is from the STA&#39;s shining example that citizens of the United States , Canada , Australia and New Zealand have banded together to form their own national sail training organizations. For information about this celebratory voyage , or about any of the STA &#39; s 36 one- and two-week training voyages offered each year for both men and women, youth and adults-and for which sponsorship is available-contact the Schooners Foundation at 16 East 69th Street, New York , NY 10021; 212 988-1057 . The Directors of AST A have postponed until next summer the first Ocean State Maritime Week sail training demonstrations in Newport , Rhode Island. The week&#39;s events were planned to span the hiatus between two well established Newport fixtures, the Newport Sailing Center&#39;s Wooden Boat Show (27-30 August) and the Museum of Yachting &#39; s Classic Yacht Regatta (5-7 September). AST A is already working to secure corporate sponsorship and insurance coverage for in-water events for an Ocean State Maritime Week in 1988. The fifth edition of AST A&#39;s authoritative Directory of Sail Training Ships and Programs is now available . The Directory covers about 150 ships and 100 organizations with sail training programs in North America as well as a schedule of international sail training races planned through 1992. The text and photographs have been updated for this year&#39; s edition, and about a third of the entries are new . The Directory is available from the NMHS at $8 per copy, postage paid. For further information about sail training opportunities this summer, contact AST A at 365 Thames Street, Newport , RI 02840 ; 401 846-1775. w 20

Years ago , when sailing in the big Cape Horn windjammers, a young hand stood a watch at the helm , braced to the weather. All the ship was a stage and he alone would be an audience to an unfolding drama. The wind and the waves were the music , the ship &#39; s yards, sails and masts, the scenery . Running before the wind, the curtain rises as the foresail sheets lift. Whether this watch is to be a comedy , tragedy or romance is yet to be seen. The old man is the star, the mates the supporting actors and the crew the cast. For the helmsman alone, they will play for an hour.

Act One. A Gathering Storm The course is east by south. The fourmasted bark Pass at is running her easting down with 4700 tons of Australian wheat in her belly and &quot;anchors hungry for English ground .&quot; Her decks are constantly bathing themselves faster, it seems, than her scuppers and wash ports can pay it off. I&#39;m standing watch at the helm. Although it is night and overcast, phosphorous from the breaking waves washes the vessel in an ominous pale . Before me is the silhouette of the huge &quot;bucko&quot; mate, clad in burly black oilskins, his eyes fixed on the protean sea . We are headed for Cape Horn. Unspoken words betray his concern. His sea legs pace a narrow deck space in a restricted pattern like a caged black cat. Hanging tough to the yard winch for stability , he looks aloft, then stares into the binnacle. The wet face of the mate is now illuminated by the flickering binna-

cle lamps. With a voice above the wind the mate hollers to me, &quot;Korn upp on course, den fon. &quot;&#39; At the helm I am concerned also. How long can I keep her lubber line 2 from drifting a point or two each way? While the helm kicks and yaws in my hands , as the ship scuds before the white horses , I stand taut, two hands on the wheel. Across my shou lder I wear a big harness strap and it is made fast to a pad eye on the deck. When the wheel kicks , my feet leave the steering platform. The shoulder strap holds me fast. I am undecided. I don&#39;t want to tell the mate I can &#39; t hold her any longer. To let him know that I need another man to assist me would risk losing acceptance by the men in the focsle on the watch below. I am no sissy. Like the mate, I decide to hang tough. The night air is filled with the undertones of a gathering storm; the rigging drones like a great cathedral organ. The mate pierces the fugue with a shrill whistle, a call to the watch police who are huddled under the focsle head trying to keep dry. The call is twofold: one, to have the watch police clean up the lines that have been washed 1. Den fan , a common Nordic profanity meaning devil. 2. A compass point such as east, to east by south , is 11.2 degrees. Drifting a point or two each way is letting the vessel swing on an arc of twenty-to-thirty degrees or a good dozen degrees to each side of the course line. The helm on a big windjammer is a six-foot diameter wheel with ten hand spokes and it takes thirty-two full turns (revolutions) to put the rudder hard starboard to hard port.