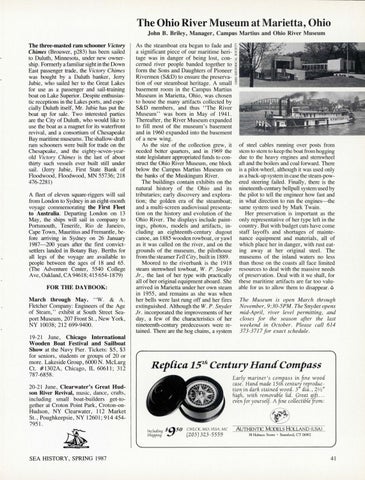 The Ohio River Museum at Marietta, Ohio John B. Briley, Manager, Campus Martins and Ohio River Museum The three-masted ram schooner Victory Chimes (Brouwer, p283) has been sailed to Duluth , Minnesota, under new ownership. Formerly a familiar sight in the Down East passenger trade, the Victory Chimes was bought by a Duluth banker, Jerry Jubie, who sailed her to the Great Lakes for use as a passenger and sail-training boat on Lake Superior. Despite enthusiastic receptions in the Lakes ports, and especially Duluth itself, Mr. Jubie has put the boat up for sale. Two interested parties are the City of Duluth , who would like to use the boat as a magnet for its waterfront revival , and a consortium of Chesapeake Bay maritime museums. The shallow-draft ram schooners were built for trade on the Chesapeake, and the eighty-seven-yearold Victory Chimes is the last of about thirty such vessels ever built still under sail. (Jerry Jubie, First State Bank of Floodwood , Floodwood, MN 55736; 218 476-2281) A fleet of eleven square-riggers will sail from London to Sydney in an eight-month voyage commemorating the First Fleet to Australia. Departing London on 13 May, the ships will sail in company to Portsmouth, Tenerife, Rio de Janeiro , Cape Town, Mauritius and Fremantle, before arriving in Sydney on 26 January 1987-200 years after the first convictsettlers landed in Botany Bay. Berths for all legs of the voyage are available to people between the ages of 18 and 65. (The Adventure Center, 5540 College Ave, Oakland, CA 94618;415 654-1879) FOR THE DA YBOOK: March through May. &quot; W. &amp; A. Fletcher Company: Engineers of the Age of Steam,&#39;&#39; exhibit at South Street Seaport Museum, 207 Front St. , New York, NY 10038; 212 699-9400. 19-21 June, Chicago International Wooden Boat Festival and Sailboat Show at the Navy Pier. Tickets: $5, $3 for seniors, students or groups of 20 or more . Lakeside Group, 6000 N. McLurg Ct. #1302A, Chicago, IL 60611 ; 312 787-6858 .

As the steamboat era began to fade and a significant piece of our maritime heritage was in danger of being lost, concerned river people banded together to form the Sons and Daughters of Pioneer Rivermen (S&amp;D) to ensure the preservation of our steamboat heritage. A small basement room in the Campus Martius Museum in Marietta, Ohio, was chosen to house the many artifacts collected by S&amp;D members, and thus &quot;The River Museum&#39;&#39; was born in May of 1941 . Thereafter, the River Museum expanded to fill most of the museum&#39;s basement and in 1960 expanded into the basement of a new wing. As the size of the collection grew, it needed better quarters, and in 1969 the state legislature appropriated funds to construct the Ohio River Museum, one block below the Campus Martius Museum on the banks of the Muskingum River. The buildings contain exhibits on the natural history of the Ohio and its tributaries; early discovery and exploration ; the golden era of the steamboat; and a multi-screen audiovisual presentation on the history and evolution of the Ohio River. The displays include paintings, photos, models and artifacts, including an eighteenth-century dugout canoe, an 1885 wooden rowboat, or yawl as it was called on the river, and on the grounds of the museum, the pilothouse from the steamer Tell City, built in 1889. Moored to the riverbank is the 1918 steam stemwheel towboat, W. P. Snyder Jr., the last of her type with practically all of her original equipment aboard. She arrived in Marietta under her own steam in 1955 , and remains as she was when her bells were last rung off and her fires extinguished. Although the W. P. Snyder Jr. incorporated the improvements of her day, a few of the characteristics of her nineteenth-century predecessors were retained . There are the hog chains, a system

The Museum is open March through November, 9:30-5PM. The Snyder opens mid-April, river level permitting, and closes for the season after the last weekend in October . Please call 614 373 -3717 for exact schedule.

of steel cables running over posts from stem to stem to keep the boat from hogging due to the heavy engines and stemwheel aft and the boilers and coal forward. There is a pilot-wheel, although it was used only as a back-up system in case the steam-powered steering failed . Finally, there is the nineteenth-century bellpull system used by the pilot to tell the engineer how fast and in what direction to run the engines-the same system used by Mark Twain. Her preservation is important as the only representative of her type left in the country. But with budget cuts have come staff layoffs and shortages of maintenance equipment and materials , all of which place her in danger, with rust eating away at her original steel. The museums of the inland waters no less than those on the coasts all face limited resources to deal with the massive needs of preservation . Deal with it we shall, for these maritime artifacts are far too valuable for us to allow them to disappear . .t