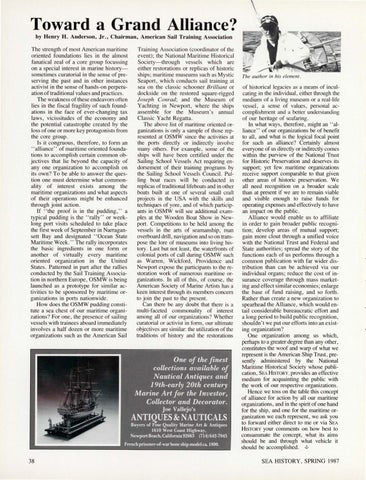 Toward a Grand Alliance? by Henry H. Anderson, Jr., Chairman, American Sail Training Association The strength of most American maritime oriented foundations lies in the almost fanatical zeal of a core group focussing on a special interest in marine historysometimes curatorial in the sense of preserving the past and in other instances activist in the sense of hands-on perpetuation of traditional values and practices. The weakness of these endeavors often lies in the fiscal fragility of such foundations in the face of ever-changing tax laws , vicissitudes of the economy and the potential catastrophe created by the loss of one or more key protagonists from the core group . Is it congruous , therefore , to form an &quot;alli ance&quot; of maritime oriented foundations to accompli sh certain common objectives that lie beyond the capacity of any one organization to accomplish on its own? To be able to answer the question one must determine what commonality of interest exists among the maritime organizations and what aspects of their operations might be enhanced through joint action. If &quot; the proof is in the pudding ,&quot; a typical pudding is the &quot; rally&quot; or weeklong port visits scheduled to take place the first week of September in Narragansett Bay and designated &#39; &#39;Ocean State Maritime Week.&quot; The rally incorporates the basic ingredients in one form or another of virtually every maritime oriented organization in the United States. Patterned in part after the rallies conducted by the Sail Training Association in northern Europe, OSMW is being launched as a prototype for similar activities to be sponsored by maritime organizations in ports nationwide . How does the OSMW pudding constitute a sea chest of our maritime organizations? For one , the presence of sailing vessels with trainees aboard immediately involves a half dozen or more maritime organizations such as the American Sail

Training Association (coordinator of the event) ; the National Maritime Historical Society-through vessels which are either restorations or replicas of historic ships; maritime museums such as Mystic Seaport, which conducts sail training at sea on the classic schooner Brilliant or dockside on the restored square-rigged Joseph Conrad; and the Museum of Yachting in Newport, where the ships assemble for the Museum&#39;s annual Classic Yacht Regatta . The above list of maritime oriented organizations is only a sample of those represented at OSMW since the activities at the ports directly or indirectly involve many others. For example, some of the ships will have been certified under the Sailing School Vessels Act requiring endorsement of their training programs by the Sailing School Vessels Council. Pulling boat races will be conducted in replicas of traditional lifeboats and in other boats built at one of several small craft projects in the USA with the skills and techniques of yore , and of which participants in OSMW will see additional examples at the Wooden Boat Show in Newport. Competitions to be held among the vessels in the arts of seamanship , man overboard drill, navigation and so on transpose the lore of museums into living history. Last but not least, the waterfronts of colonial ports of call during OSMW such as Warren, Wickford , Providence and Newport expose the participants to the restoration work of numerous maritime organizations . In all of this , of course, the American Society of Marine Artists has a keen interest through its members concern to join the past to the present. Can there be any doubt that there is a multi-faceted commonality of interest among all of our organizations? Whether curatorial or activist in form , our ultimate objectives are similar: the utilization of the traditions of history and the restorations

The author in his element .

of historical legacies as a means of inculcating in the individual, either through the medium of a living museum or a real-life vessel, a sense of values , personal accomplishment and a better understanding of our heritage of seafaring. In what ways, therefore, might an &quot;alliance&quot; of our organizations be of benefit to all, and what is the logical focal point for such an alliance? Certainly almost everyone of us directly or indirectly comes within the purview of the National Trust for Historic Preservation and deserves its support; yet few maritime organizations receive support comparable to that given other areas of historic preservation. We all need recognition on a broader scale than at present if we are to remain viable and visible enough to raise funds fo r operating expenses and effectively to have an impact on the public . Alliance would enable us to affi liate in order to gain broader public recognition; develop areas of mutual support; gain more clout through a unified voice with the National Trust and Federal and State authorities; spread the story of the functions each of us performs through a common publication with far wider distribution than can be achieved via our individual organs; reduce the cost of insurance coverage through mass marketing and effect simi lar economies; en large the base of fund raising, and so forth . Rather than create a new organization to spearhead the Alliance, which would entail considerable bureaucratic effort and a long period to build public recognition , shouldn &#39; t we put our efforts into an existing organ ization ? One organization among us which , perhaps to a greater degree than any other, constitutes the woof and warp of what we represent is the American Ship Trust, presently administered by the National Maritime Historical Society whose publication, SEA HISTORY , provides an effective medium for acquai nting the public with the work of our respective organizations. Hence we toss on the table this concept of alliance for action by all our maritime organizations, and in the spirit of one hand for the ship, and one for the maritime organization we each represent, we ask you to forward either direct to me or via SEA HISTORY your comments on how best to consummate the concept, what its aims should be and through what vehicle it should be accomplished . w SEA HISTORY, SPRING 1987