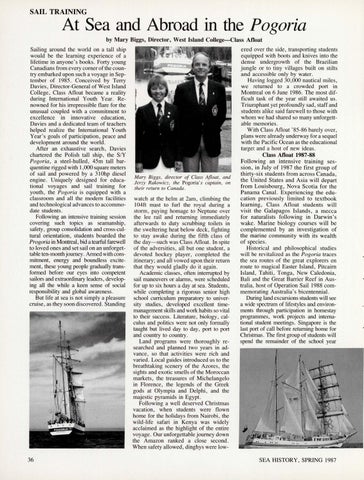 At Sea and Abroad in the Pogoria by Mary Biggs, Director, West Island College-Class Afloat Sailing around the world on a tall ship would be the learning experience of a lifetime in anyone&#39;s books . Forty young Canadians from every corner of the country embarked upon such a voyage in September of 1985. Conceived by Terry Davies , Director-General of West Island College, Class Afloat became a reality during International Youth Year. Renowned for his irrepressible flare for the unusual coupled with a commitment to excellence in innovative education, Davies and a dedicated team of teachers helped realize the International Youth Year&#39;s goals of participation, peace and development around the world. After an exhaustive search , Davies chartered the Polish tall ship, the S/Y Pogoria, a steel-hulled, 45m tall barquentine rigged with 1,000 square meters of sail and powered by a 3 IOhp diesel engine. Uniquely designed for educational voyages and sail training for youth , the Pogoria is equipped with a classroom and all the modern facilities and technological advances to accommodate students. Following an intensive training session covering such topics as seamanship, safety, group consolidation and cross-cultural orientation, students boarded the Progoria in Montreal , bid a tearful farewell to loved ones and set sail on an unforgettable ten-month journey. Armed with commitment, energy and boundless excitement, these young people gradually transformed before our eyes into competent sailors and extraordinary leaders , developing all the while a keen sense of social responsibility and global awareness. But life at sea is not simply a pleasure cruise, as they soon discovered. Standing

ered over the side, transporting students equipped with boots and knives into the dense undergrowth of the Brazilian jungle or to tiny villages built on stilts and accessible only by water. Having logged 30,000 nautical miles , we returned to a crowded port in Montreal on 6 June 1986. The most difficult task of the year still awaited us . Triumphant yet profoundly sad, staff and students alike said farewell to those with whom we had shared so many unforgettable memories. With Class Afloat &#39;85-86 barely over, plans were already underway for a sequel with the Pacific Ocean as the educational target and a host of new ideas .

Mary Biggs, director of Class Afloat, and Jerzy Rakowicz , the Pogoria&#39; s captain, on their return to Canada.

watch at the helm at 2am, climbing the 104ft mast to furl the royal during a storm, paying homage to Neptune over the lee rail and returning immediately afterwards to duty scrubbing toilets in the sweltering heat below deck, fighting to stay awake during the fifth class of the day-such was Class Afloat. In spite of the adversities, all but one student, a devoted hockey player, completed the itinerary; and all vowed upon their return that they would gladly do it again. Academic classes , often interrupted by sail maneuvers or alarms , were scheduled for up to six hours a day at sea. Students, while completing a rigorous senior high school curriculum preparatory to university studies, developed excellent timemanagement skills and work habits so vital to their success. Literature, biology, calculus and politics were not only formally taught but lived day to day, port to port and country to country. Land programs were thoroughly researched and planned two years in advance, so that activities were rich and varied. Local guides introduced us to the breathtaking scenery of the Azores , the sights and exotic smells of the Moroccan markets , the treasures of Michelangelo in Florence, the legends of the Greek gods at Olympia and Delphi , and the majestic pyramids in Egypt. Following a well deserved Christmas vacation, when students were flown home for the holidays from Nairobi , the wild-life safari in Kenya was widely acclaimed as the highlight of the entire voyage. Our unforgettable journey down the Amazon ranked a close second. When safety allowed , dinghys were low-

Following an intensive training session, in July of 1987 the first group of thirty-six students from across Canada, the United States and Asia will depart from Louisbourg, Nova Scotia for the Panama Canal. Experiencing the education previously limited to textbook learning, Class Afloat students will visit the Galapagos Islands, a mecca for naturalists following in Darwin &#39;s wake. Marine biology courses will be complemented by an investigation of the marine community with its wealth of species. Historical and philosophical studies will be revitalized as the Pogoria traces the sea routes of the great explorers en route to magical Easter Island , Pitcairn Island, Tahiti, Tonga, New Caledonia, Bali and the Great Barrier Reef in Australia, host of Operation Sail 1988 commemorating Australia&#39;s bicentennial. During land excursions students will see a wide spectrum of lifestyles and environments through participation in homestay programmes, work projects and international student meetings . Singapore is the last port of call before returning home for Christmas. The first group of students will spend the remainder of the school year