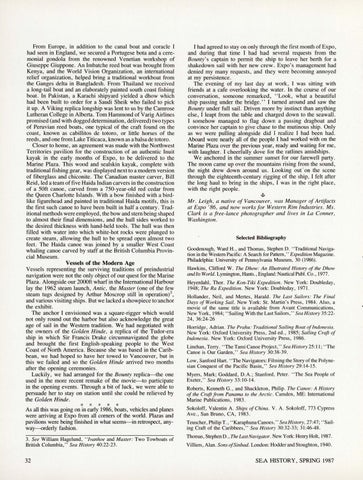 From Europe, in addition to the canal boat and coracle I had seen in England, we secured a Portugese bota and a ceremonial gondola from the renowned Venetian workshop of Giuseppe Giuppone . An Imbatche reed boat was brought from Kenya , and the World Vision Organization, an international relief organization , helped bring a traditional workboat from the Ganges delta in Bangladesh . From Thailand we received a long-tail boat and an elaborately painted south coast fishing boat. In Pakistan , a Karachi shipyard yielded a dhow which had been built to order for a Saudi Sheik who failed to pick it up . A Viking replica longship was lent to us by the Camrose Lutheran College in Alberta. Tom Hammond ofVarig Airlines promised (and with dogged determination , delivered) two types of Peruvian reed boats, one typical of the craft found on the coast, known as cabillitos de totoro , or little horses of the reeds, and one from Lake Titicaca, known as a balsa de totoro. Closer to home , an agreement was made with the Northwest Territories pavilion for the construction of an authentic Inuit kayak in the early months of Expo, to be delivered to the Marine Plaza. This wood and sealskin kayak, complete with traditional fi shing gear, was displayed next to a modem version of fiberglass and chiconite. The Canadian master carver , Bill Reid , led a team of five Haida Indian carvers in the construction of a 50ft canoe , carved from a 750-year-old red cedar from the Queen Charlotte Islands. With a bow fini shed with a birdlike figurehead and painted in traditional Haida motifs , this is the first such canoe to have been built in half a century . Traditional methods were employed , the bow and stem being shaped to almost their final dimensions , and the hull sides worked to the desired thickness with hand-held tools. The hull was then filled with water into which white-hot rocks were plunged to create steam , allowing the hull to be spread open almost two feet. The Haida canoe was joined by a smaller West Coast whaling canoe carved by staff at the British Columbia Provi ncial Museum .

Vessels of the Modern Age Vessels representing the surviving traditions of preindustrial navigation were not the only object of our quest for the Marine Plaza. Alongside our 2000ft wharf in the International Harbour lay the 1962 steam launch , Antic, the Master (one of the few steam tugs designed by Arthur Moscrop still 'in operation) 3 , and various visiting ships. But we lacked a showpiece to Âˇanchor the exhibit. The anchor I envisioned was a square-rigger which would not only round out the harbor but also acknowledge the great age of sail in the Western tradition . We had negotiated with the owners of the Golden Hinde, a replica of the Tudor-era ship in which Sir Francis Drake circumnavigated the globe and brought the first English-speaking people to the West Coast of North America. Because she was based in the Caribbean, we had hoped to have her towed to Vancouver, but in this we fa iled and so the Golden Hinde arrived two months after the opening ceremonies. Luckily , we had arranged for the Bounty replica-the one used in the more recent remake of the movie-to participate in the opening events. Through a bit of luck , we were able to persuade her to stay on station until she could be relieved by the Golden Hinde.

* *1986, * boats, * vehicles and planes As all this was going on *in early were arriving at Expo from all comers of the world. Plazas and pavilions were being finished in what seems-in retrospect, anyway--orderly fashion. 3. See William Hagelund, " Ivanhoe and Master: Two Towboats of British Columbia, " Sea History 40:22-23 . 32

I had agreed to stay on only through the first month of Expo , and during that time I had had several requests from the Bounty's captain to permit the ship to leave her berth for a shakedown sail with her new crew. Expo's management had denied my many requests, and they were becoming annoyed at my persistence . The evening of my last day at work, I was sitting with friends at a cafe overlooking the water. In the course of our conversation , someone remarked, " Look , what a beautiful ship passing under the bridge ." I turned around and saw the Bounty under full sail. Driven more by instinct than anything else, I leapt from the table and charged down to the seawall. I somehow managed to flag down a passing dragboat and convince her captain to give chase to the mutinous ship. Only as we were pulling alongside did I realize I had been had . Aboard were nearly all of the people I had worked with on the Marine Plaza over the previous year, ready and waiting for me, with laughter. I cheerfully dove for the ratlines amidships . We anchored in the summer sunset for our farewell party. The moon came up over the mountains rising from the sound , the night drew down around us. Looking out Âˇ on the scene through the eighteenth-century rigging of the ship , I felt after the long haul to bring in the ships, I was in the right place, with the right people .