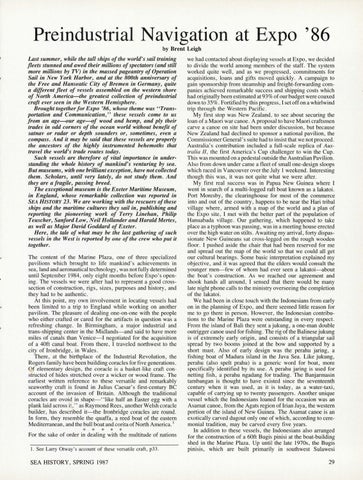 Preindustrial Navigation at Expo &#39;86 by Brent Leigh Last summer, while the tall ships of the world&#39;s sail training fleets stunned and awed their millions of spectators (and still more millions by TV) in the massed pageantry of Operation Sail in New York Harbor, and at the 800th anniversary of the Free and Hanseatic City of Bremen in Germany, quite a different fleet of vessels assembled on the western shore of North America-the greatest collection of preindustrial craft e11er seen in the Western Hemisphere. Brought together for Expo &#39;86, whose theme was &quot;Transportation and Communication,&quot; these vessels come to us from an age-our age-of wood and hemp, and ply their trades in odd corners of the ocean world without benefit of satnav or radar or depth sounders or, sometimes, even a compass. And it may be said that these vessels are properly the ancestors of the highly instrumented behemoths that travel the world&#39;s trade routes today. Such vessels are therefore of vital importance in understanding the whole history of mankind&#39;s venturing by sea. But museums, with one brilliant exception, have not collected them. Scholars, until very lately, do not study them. And they are a fragile, passing breed. The exceptional museum is the Exeter Maritime Museum, in England, whose remarkable collection was reported in SEA HISTORY 23. We are working with the rescuers of these ships and the maritime cultures they sail in, publishing and reporting the pioneering work of Terry Linehan, Philip Teuscher, Sanford Low, Neil Hollander and Harald Mertes, as well as Major David Goddard of Exeter. Here, the tale of what may be the last gathering of such vessels in the West is reported by one of the crew who put it together. The content of the Marine Plaza, one of three specialized pavilions which brought to life mankind &#39;s achievements in sea, land and aeronautical technology , was not fully determined until September 1984, only eight months before Expo&#39;s opening . The vessels we were after had to represent a good crosssection of construction, rigs , sizes, purposes and history, and they had to be authentic . At this point, my own involvement in locating vessels had been limited to a trip to England while working on another pavilion. The pleasure of dealing one-on-one with the people who either crafted or cared for the artifacts in question was a refreshing change. In Birmingham, a major industrial and trans-shipping center in the Midlands-and said to have more miles of canals than Venice-I negotiated for the acquisition of a 40ft canal boat. From there , I traveled northwest to the city of Ironbridge, in Wales . There , at the birthplace of the Industrial Revolution, the Rogers family have been building coracles for five generations . (If elementary design , the coracle is a basket-like craft constructed 6f hides stretched over a wicker or wood frame. The earliest written reference to these versatile and remarkably seaworthy craft is found in Julius Caesar&#39;s first-century BC account of the invasion of Britain. Although the traditional coracles are ovoid in shape-&quot; like half an Easter egg with a plank laid across it,&#39; &#39; as Raymond Rees, another Welsh coracle builder, has described it-the Ironbridge coracles are round. In form, they resemble the quaffa, a reed boat of the eastern Mediterranean , and the bull boat and corita of North America . 1

* * with * *the multitude of nations For the sake of order in* dealing I. See Larry Otway&#39;s account of these versatile craft, p33 .

we had contacted about displaying vessels at Expo, we decided to divide the world among members of the staff. The system worked quite well, and as we progressed , commitments for acquisitions, loans and gifts moved quickly . A campaign to gain sponsorship from steamship and freight-forwarding companies achieved remarkable success and shipping costs which had originally been estimated at 93 % of our budget were coaxed down to 35 % . Fortified by this progress, I set off on a whirl wind trip through the Western Pacific. My first stop was New Zealand , to see about securing the loan of a Maori war canoe. A proposal to have Maori craftsmen carve a canoe on site had been under discussion , but because New Zealand had declined to sponsor a national pavilion , the Commissioner General&#39;s suite had to insist that we not proceed. Australia &#39; s contribution included a full-scale replica of Australia II, the first America&#39;s Cup challenger to win the Cup. This was mounted on a pedestal outside the Australian Pavilion . Also from down under came a fleet of small one-design sloops which raced in VancouverovertheJuly 1 weekend. Interesting though this was, it was not quite what we were after. My first real success was in Papua New Guinea where I went in search of a multi-logged raft boat known as a lakatoi . Port Moresby, the clearinghouse for most of the commerce into and out of the country , happens to be near the Hari tribal village where, armed with a map of the world and a plan of the Expo site, I met with the better part of the population of Hanuabada village. Our gathering, which happened to take place as a typhoon was passing , was in a meeting house erected over the high water on stilts . Awaiting my arrival , forty dispassionate New Guineans sat cross-legged on the rough wooden floor. I pushed aside the chair that had been reserved for me and spread out the map of the world so that we could all get our cultural bearings. Some basic interpretation explained my objective, and it was agreed that the elders would consult the younger men-few of whom had ever seen a lakatoi-about the boat&#39;s construction. As we reached our agreement and shook hands all around , I sensed that there would be many late night phone calls to the ministry overseeing the completion of the lakatoi. We had been in close touch with the Indonesians from early on in the planning of Expo , and there seemed little reason for me to go there in person. However, the Indonesian contributions to the Marine Plaza were outstanding in every respect. From the island of Bali they sent ajukung , a one-man double outrigger canoe used for fishing . The rig of the Balinese jukung is of extremely early origin, and consists of a triangular sail spread by two booms joined at the bow and supported by a short mast. Also of early design was the perahu jaring, a fishing boat of Madura island in the Java Sea. Like jukung, perahu (also spelt prahu) is a generic word for boat, more specifically identified by its use . A perahu jaring is used for netting fish, a perahu ngadang for trading. The Banjarmasin tambangan is thought to have existed since the seventeenth century when it was used , as it is today, as a water-taxi , capable of carrying up to twenty passengers . Another unique vessel which the Indonesians loaned for the occasion was an Asamat canoe , from the Agats region of Irian Jaya, the western portion of the island of New Guinea . The Asamat canoe is an exotically carved dugout only one of which, according to ceremonial tradition, may be carved every five years. In addition to these vessels, the Indonesians also arranged for the construction of a 60ft Bugis pinisi at the boat-building shed in the Marine Plaza. Up until the late 1970s, the Bugis pinisis , which are built primarily in southwest Sulawesi