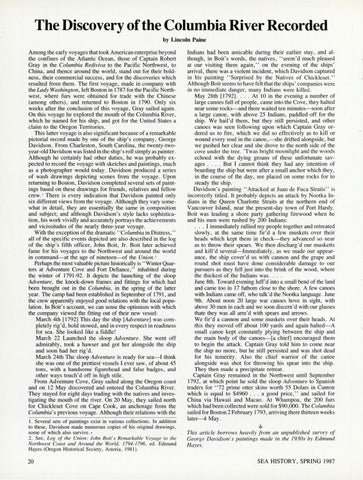 The Discovery of the Columbia River Recorded by Lincoln Paine Among the early voyages that took American enterprise beyond the confines of the Atlantic Ocean , those of Captain Robert Gray in the Columbia Rediviva to the Pacific Northwest, to China, and thence around -the world , stand out for their boldness , their commercial success, and for the discoveries which resulted from them . The first voyage, made in company with the Lady Washington, left Boston in 1787 for the Pacific Northwest, where furs were obtained for trade with the Chinese (among others), and returned to Boston in 1790. Only six weeks after the conclusion of this voyage, Gray sailed again . On this voyage he explored the mouth of the Columbia River, which he named for his ship, and got for the United States a claim to the Oregon Territories. This latter voyage is also significant because of a remarkable pictorial record made by one of the ship&#39;s company, George Davidson. From Charleston, South Carolina, the twenty-twoyear-old Davidson was listed in the ship&#39;s roll simply as painter. Although he certainly had other duties, he was probably expected to record the voyage with sketches and paintings, much as a photographer would today . Davidson produced a series of wash drawings depicting scenes from the voyage. Upon returning to Boston , Davidson completed several sets of paintings based on these drawings for friends , relatives and fellow crew. &#39; There is every indication that Davidson painted only six different views from the voyage. Although they vary somewhat in detail, they are essentially the same in composition and subject; and although Davidson &#39;s style lacks sophistication, his work vividly and accurately portrays the achievements and vicissitudes of the nearly three-year voyage. With the exception of the dramatic &#39;&#39;Columbia in Distress,&#39;&#39; all of the specific events depicted are also described in the log of the ship&#39;s fifth officer, John Boit, Jr. Boit later achieved fame for his voyages to the Northwest and around the world in command-at the age of nineteen-of the Union. &#39; Perhaps the most valuable picture historically is &quot;Winter Quarters at Adventure Cove and Fort Defiance,&#39;&#39; inhabited during the winter of 1791-92. It depicts the launching of the sloop Adventure, the knock-down frames and fittings for which had been brought out in the Columbia, in the spring of the latter year. The camp had been established in September of 1791 , and the crew apparently enjoyed good relations with the local population . In Boit&#39;s account, we can sense the optimism with which the company viewed the fitting out of their new vessel: March 4th (1792) This day the ship [Adventure] was completely rig&#39;d, hold stowed, and in every respect in readiness for sea. She looked like a fidd le! March 22 Launched the sloop Adventure. She went off admirably, took a hawser and got her alongside the ship and soon had her rig&#39;d. March 24th The sloop Adventure is ready for sea-I think she was one of the prettiest vessels I ever saw, of about 45 tons, with a handsome figurehead and false badges, and other ways touch &#39;d off in high stile. From Adventure Cove, Gray sailed along the Oregon coast and on 12 May discovered and entered the Columbia River. They stayed for eight days trading with the natives and investigating the mouth of the river. On 20 May , they sailed north for Chickleset Cove on Cape Cook, an anchorage from the Columbia&#39;s previous voyage. Although their relations with the I _ Several sets of paintings exist in various collections. In .addition to these, Davidson made numerous copies of his original drawings, some of which also survive. Âˇ 2. See, Log of the Union: John Boil&#39; s Remarkable Voyage to the Northwest Coast and Around the World, 1794-1796, ed. Edmund Hayes (Oregon Historical Society, Astoria, 1981).

Indians had been amicable during their earlier stay, and although, in Boit&#39;s words, the natives , &quot;seem&#39; d much pleased at our visiting them again,&quot; on the evening of the ships &#39; arrival, there was a violent incident , which Davidson captured in his painting &quot; Surprised by the Natives of Chickleset.&quot; Although Bo it seems to have felt that the ships &#39; companies were in no immediate danger, many Indians were killed . May 28th [ 1792] .... At 10 in the evening a number of large canoes full of people , came into the Cove, they halted near some rocks-and there waited ten minutes-soon after a large canoe, with above 25 Indians, paddled off for the ship. We hail&#39;d them , but they still persisted, and other canoes was seen following upon which Captain Gray ordered us to fire , which we did so effectively as to kill or wound every soul in the canoe ,-she drifted alongside , but we pushed her clear and she drove to the north side of the cove under the tree . &#39;Twas bright moonlight and the woods echoed with the dying groans of these unfortunate savages .... But I cannot think they had any intention of boarding the ship but were after a small anchor which they , in the course of the day, see placed on some rocks for to steady the ship . Davidson &#39;s painting &quot; Attacked at Juan de Fuca Straits&quot; is incorrectly titled . It probably depicts an attack by Nootka Indians in the Queen Charlotte Straits at the northern end of Vancouver Island , near the present-day town of Port Hardy . Boit was leading a shore party gathering firewood when he and his men were rushed by 200 Indians: .. . I immediately rallied my people together and retreated slowly , at the same time fir&#39; d a few muskets over their heads which kept them in check-they advanced so near as to throw their spears. We then discharg &#39;d our musketts and kill &#39; d several-Immediately , as we made our appearance, the ship cover&#39;d us with cannon and the grape and round shot must have done considerable damage to our _ pursuers as they fell just into the brink of the wood, where the thickest of the Indians was ... . June 8th. Toward evening luffd into a small bend of the land and came too in 17 fathom close to the shore. A few canoes with Indians came off, who talk&#39;d the Nootka language. June 9th. About noon 20 large war canoes hove in sight, with above 30 men in each and we soon discem&#39;d with our glasses thate they was all arm&#39;d with spears and arrows . We fir&#39;d a cannon and some muskets over their heads . At this they moved off about 100 yards and again halted-A small canoe kept constantly plying between the ship and the main body of the canoes-[a chief] encouraged them to begin the attack . Captain Gray told him to come near the ship no more, but he still persisted and was shot dead for his temerity . Also the chief warrior of the canoe alongside was shot for throwing his spear into the ship . They then made a precipitate retreat. Captain Gray remained in the Northwest until September 1792, at which point he sold the sloop Adventure to Spanish traders for &#39;&#39; 72 prime otter skins worth 55 Dolars in Canton which is equal to $4960 . .. a good price,&quot; and sailed for China via Hawaii and Macao . At Whampoa, the 200 furs which had been collected were sold for $90 ,000 . The Columbia sailed for Boston 2 February 1793 , arriving there thirteen weeks later--4 May .

w This article borrows heavily from an unpublished survey of George Davidson&#39; s paintings made in the 1930s by Edmund Hayes. SEA HISTORY, SPRING 1987