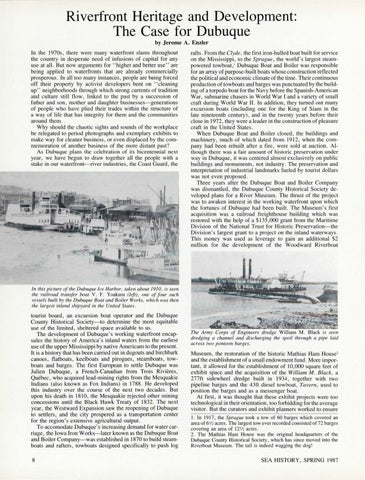 Riverfront Heritage and Development: The Case for Dubuque by Jerome A. Enzler

In the 1970s, there were many waterfront slums throughout the country in desperate need of infusions of capital for any use at all. But now arguments for &quot; higher and better use&quot; are being applied to waterfronts that are already commercially prosperous. In all too many instances, people are being forced off their property by activist developers bent on &quot; cleaning up&#39;&#39; neighborhoods through which strong currents of tradition and culture still flow, linked to the past by a succession of father and son , mother and daughter businesses-generations of people who have plied their trades within the structure of a way of life that has integrity for them and the communities around them . Why should the chaotic sights and sounds of the workplace be relegated to period photographs and exemplary exhibits to make way for cleaner business , or even displaced by the commemoration of another business of the more distant past? As Dubuque plans the celebration of its bicentennial next year, we have begun to draw together all the people with a stake in our waterfront-river industries, the Coast Guard, the

rafts . From the Clyde, the first iron-hulled boat built for service on the Mississippi , to the Sprague , the world&#39;s largest steampowered towboat,&#39; Dubuque Boat and Boiler was responsible for an array of purpose-built boats whose construction reflected the political and economic climate of the time. Their continuous production of towboats and barges was punctuated by the building of a torpedo boat for the Navy before the Spanish-American War , submarine chasers in World War I and a variety of small craft during World War II. In addition , they turned out many excursion boats (including one for the King of Siam in the late nineteenth century) , and in the twenty years before their close in 1972 , they were a leader in the construction of pleasure craft in the United States. When Dubuque Boat and Boiler closed , the buildings and machinery, much of which dated from 1912, when the company had been rebuilt after a fire , were sold at auction. Although there was a fair amount of historic preservation under way in Dubuque, it was centered almost exclusively on public buildings and monuments , not industry. The preservation and interpretation of industrial landmarks fueled by tourist dollars was not even proposed . Three years after the Dubuque Boat and Boiler Company was dismantled , the Dubuque County Historical Society developed plans for a River Museum . The thrust of the project was to awaken interest in the working waterfront upon which the fortunes of Dubuque had been built. The Museum &#39; s first acquisition was a railroad freighthouse building which was restored with the help of a $135 ,000 grant from the Maritime Division of the National Trust for Historic Preservation-the Division&#39;s largest grant to a project on the inland waterways. This money was used as leverage to gain an additional $2 million for the development of the Woodward Riverboat

In this picture of the Dubuque Ice Harbor , taken about 1910, is seen the railroad transfer boat V . F. Yoakum (left), one of four such vessels built by the Dubuque Boat and Boiler Works, which was then the largest inland shipyard in the United States.

tourist board, an excursion boat operator and the Dubuque County Historical Society-to determine the most equitable use of the limited, sheltered space available to us. The development of Dubuque &#39; s working waterfront encapsules the history of America&#39;s inland waters from the earliest use of the upper Mississippi by native Americans to the present. It is a history that has been carried out in dugouts and birchbark canoes, flatboats, keelboats and pirogues, steamboats, towboats and barges. The first European to settle Dubuque was Julien Dubuque, a French-Canadian from Trois Rivieres, Quebec, who acquired lead-mining rights from the Mesquakie Indians (also known as Fox Indians) in 1788 . He developed this industry over the course of the next two decades. But upon his death in 1810, the Mesquakie rejected other mining concessions until the Black Hawk Treaty of 1832. The next year, the Westward Expansion saw the reopening of Dubuque to settlers, and the city prospered as a transportation center for the region &#39; s extensive agricultural output. To accomodate Dubuque&#39;s increasing demand for water carriage , the Iowa Iron Works-later known as the Dubuque Boat and Boiler Company-was established in 1870 to build steamboats and rafters , towboats designed specifically to push log

The Army Corps of Engineers dredge William M. Black is seen dredging a channel and discharging the spoil through a pipe laid across two pontoon barges.

Museum, the restoration of the historic Mathias Ham House2 and the establishment of a small endowment fund . More important, it allowed for the establishment of 10,000 square feet of exhibit space and the acquisition of the William M. Black, a 277ft sidewheel dredge built in 1934, together with two pipeline barges and the 43ft diesel towboat, Tavern, used to position the barges and as a messenger boat. At first, it was thought that these exhibit projects were too technological in their orientation , too forbidding for the average visitor. But the curators and exhibit planners worked to ensure 1. In 1917, the Sprague took a tow of 60 barges which covered an area of 6 1/2 acres . The largest tow ever recorded consisted of 72 barges covering an area of 12 1/2 acres. 2 . The Mathias Ham House was the original headquarters of the Dubuque County Historical Society , which has since moved into the Riverboat Museum . The tai l is indeed wagging the dog!