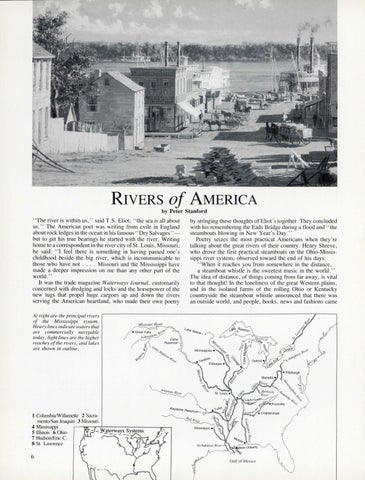 &quot; The river is within us, &quot; said T .S . Eliot, &quot; the sea is all about us. &quot; The American poet was writing from ex ile in England about rock ledges in the ocean in his fam ous &#39;&#39; Dry Salvages &#39;&#39; but to get his true bearings he started with the river. Writing home to a correspondent in the river city of St. Louis, Missouri , he said : &quot; I feel there is something in having passed one &#39; s childhood bes ide the big ri ver, which is incommunicable to those who have not . ... Missouri and the Mississippi have made a deeper impression on me than any other part of the world . &#39; &#39; It was the trade magazine Waterways Journal, customaril y concerned with dredgi ng and locks and the horsepower of the new tugs that propel huge cargoes up and down the rivers serving the American heartland , who made their own poetry

by stringing these thoughts of Eliot&#39;s together. T hey concluded with his remembering the Eads Bridge durin g a fl ood and &#39; &#39; the steamboats blow ing in New Year&#39; s Day. &quot; Poetry seizes the most practical Americans when they&#39; re talking about the great ri vers of their country . Henry Shreve , who drove the first practical steamboats on the Ohio-Mi ss issippi ri ver system , observed toward the end of his days: &#39; &#39; When ~t reaches you from somewhere in the distance , a steamboat whi stle is the sweetest music in the world .&quot; The idea of di stance , of things coming from fa r away , is vital to that thought ! In the loneliness of the great Western plains , and in the isolated fa rms of the ro lling Ohio or Kentucky countryside the steamboat whistle announced that there was an outside world , and people , books, news and fas hions came

At right are the principal rivers of the Mississippi system. Heavy lines indicate waters that are commercially navigable today, light lines are the higher reaches of the rivers, and lakes are shown in outline.