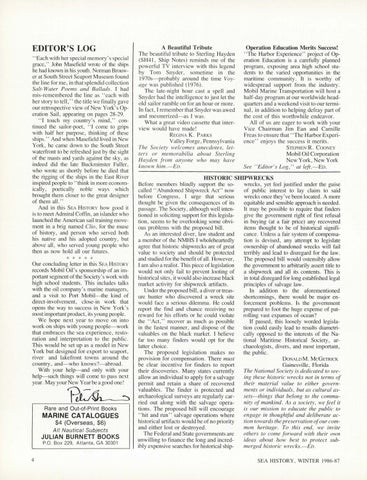 EDITOR&#39;S LOG &#39; &#39;Each with her special memory &#39; s special grace,&quot; John Masefield wrote of the ships he had known in his youth. Nonnan Brouwer at South Street Seaport Museum found the line for me, in that splendid collection Salt-Water Poems and Ballads. 1 had mis-remembered the line as &quot;each with her story to tell,&#39;&#39; the title we finally gave our retrospective view of New York&#39;s Operation Sail, appearing on pages 28-29. &quot;I touch my country&#39;s mind,&quot; continued the sailor-poet, &quot;I come to grips with half her purpose , thinking of these ships.&quot; And when Masefield lived in New York, he came down to the South Street waterfront to be refreshed just by the sight of the masts and yards against the sky, as indeed did the late Buckminster Fuller, who wrote us shortly before he died that the rigging of the ships in the East River inspired people to &#39;&#39;think in more economically , poetically noble ways which brought them closer to the great designer of them all.&quot; And in this SEA HISTORY how good it is to meet Admiral Coffin , an islander who launched the American sail training movement in a brig named Clio , for the muse of history, and person who served both his native and his adopted country, but above all , who served young people who then as now hold all our futures.

Our concluding letter in this SEA HISTORY records Mobil Oil &#39;s sponsorship of an important segment of the Society&#39;s work with high school students. This includes talks with the oil company &#39; s marine managers, and a visit to Port Mobil- the kind of direct-involvement , close-in work that opens the way to success in New York&#39;s most important product, its young people . We hope next year to move on into work on ships with young people- work that embraces the sea experience, restoration and interpretation to the public . This would be set up as a model in New York but designed for export to seaport, river and lakefront towns around the country , and-who knows?-abroad. With your help-and on ly with your help-such things will come to pass next year. May your New Year be a good one!

The beautiful tribute to Sterling Hayden (SH4 l , Ship Notes) reminds me of the powerful TV interview with thi s legend by Tom Snyder , sometime in the l 970s-probably around the time Voyage was published ( 1976) . The late-night hour cast a spell a nd Snyder had the intelligence to just let the old sailor ramble on for an hour or more. In fact, I remember that Snyder was awed and mesmerized-as I was. What a great video cassette that interview would have made! REGINA K . PARKS Valley Forge , Pennsylvania

&quot; The Harbor Experience &quot; project of Operation Education is a carefull y planned program, exposing area high school students to the varied opportunities in the maritime community. It is worthy of widespread support from the industry . Mobil Marine Transportation will host a half-day program at our worldwide headquarters and a weekend visit to our terminal , in addition to helping defray part of the cost of thi s worthwhile ende_a vor. All of us are eager to work with your Vice Chairman Jim Ean and Cami lle Freas to ensure that &quot;The Harbor Experie nce &quot; enjoys the success it merits . STEPHEN R. COONEY Mobil Oil Corporation New York , New York

The Society welcomes anecdotes, letters or memorabilia about Sterling Hayden from anyone who may have Âˇ known him. -ED. See &quot; Editor&#39;s Log,&quot; at left. - ED.

HISTORIC SHIPWRECKS Before members blindly support the sowrecks, yet fee l justified under the guise called &quot; Abandoned Shipwreck Act&quot; now of public interest to lay claim to said before Congress, I urge that serious wrecks once they &#39; ve been located . A more thought be given the consequences of its equitable and sensible approach is needed. It may be possible to require that finders passage. The Society, although well intentioned in soliciting support for this legislagive the government right of first refusal in buying (at a fair price) any recovered tion , seems to be overlooking some obvious problems with the proposed bill. items thought to be of historical signifiAs an interested diver, law student and cance. Unless a fair system of compensation is devised , any attempt to legislate a me mber of the NMHS I wholeheartedly ownership of abandoned wrecks will fail agree that historic shipwrecks are of great value to society and should be protected terribly and lead to disregard for the law . The proposed bill would ostensibly allow and studi ed for the benefit of all. However, I am also a realist. This piece of legislation the government to arbitrarily assert title to a shipwreck and all its contents. This is wou ld not only fail to prevent looting of historical sites, it would also increase black in total disregard for long established legal market activity for shipwreck artifacts. principles of salvage law. Under the proposed bill , a diverortreasIn addition to the aforementioned ure hunter who discovered a wreck site shortcomings, there would be major enforcement problems. Is the government would face a serious dilemma. He cou ld report the find and chance receiving no prepared to foot the huge expense of patrolling vast expanses of ocean? reward for his efforts or he could violate the &quot; Act,&quot; recover as much as possible If passed , this loosely worded legislain the fastest manner, and dispose of the tion could easily lead to results diametrically opposed to the interests of the Navaluables on the black market. I believe tional Maritime Historical Society , arfar too many finders wou ld opt for the latter choice. chaeologists, divers , and most important, The proposed leg islation makes no the public . provision for compensation . There must DoNALDM. McGETRICK be clear incentive for finders to report Gainesville, Florida The National Society is dedicated to seetheir discoveries. Many states currently ing these historic wrecks not in terms of allow an individual to app ly for a salvage their material value to either governpermit and retain a share of recovered ments or individuals, but as cultural asvaluables. The finder is protected and arch aeo logical surveys are regularly carsets-things that belong to the community of mankind. As a society, we feel it ried out along with the salvage operais our mission to educate the public to tions. The proposed bill will encourage engage in thoughtful and deliberate ac&#39;&#39;hit and run &#39; &#39; salvage operations where tion towards the preservation ofour comhistorical artifacts would be of no priority mon heritage . To this end, we invite and either lost or destroyed . The Federal and State governments are others to come forward with their own unwilling to finance the long and incredideas about how best to protect submerged historic wrecks .-ED. ibly expensive searches for historical shipSEA HISTORY , WINTER 1986-87