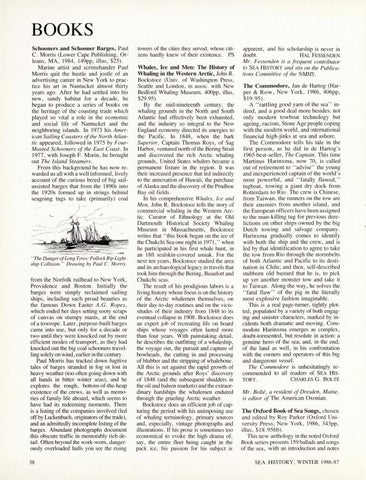 BOOKS Schooners and Schooner Barges, Paul C. Morris (Lower Cape Publishing, Orleans, MA , 1984 , 149pp, illu s, $25) . Marine artist and scrimshander Paul Morri s quit the hustle and jostle of an advertising career in New York to practice hi s art in Nantucket almost thirty years ago. After he had settled into his new , sandy habitat for a decade , he began to produce a series of books on the heritage of the coasting trade which played so vital a role in the economic and social life of Nantucket and the neighboring islands. In 1973 his American Sailing Coasters of the North Atlantic appeared, fo llowed in 1975 by FourMasted Schooners of the East Coast. In 1977 , with Joseph F. Morin , he brought out The Island Steamers . From this background he has now rewarded us all with a well informed , li vely account of the curious breed of bi g sailassisted barges that from the 1890s into the 1920s formed up in strings behind seagoing tugs to take (primarily) coal .

from the Norfolk railhead to New York , Providence and Boston . Initiall y the barges were simply reclaimed sailing ships, including such proud beauties as the famo us Down Easter A .G . Ropes, which ended her days setting sooty scraps of canvas on stumpy masts, at the end of a towrope . Later, purpose-built barges came into use , but only for a decade or two until they were knocked out by more efficient modes of transport , as they had knocked out the big coal schooners travelling solely on wind , earlier in the century . Paul Morris has tracked down fugitive tales of barges stranded in fog or lost in heavy weather (too often going down with all hands in bitter winter seas), and he explores the rough, bottom-of-the-heap existence of the crews, as well as memories of family life aboard, which seems to have had its redeeming moments. There is a listing of the companies involved (led off by Luckenbach , originators of the trade), and an admittedly incomplete listing of the barges. Abundant photographs document this obscure traffic in memorably rich detail. Often beyond the work-worn, dangerously overloaded hulls you see the rising 38

towers of the cities they served, whose citizens hardly knew of their existence. PS Whales, Ice and Men: The History of Whaling in the Western Arctic, John R . Bockstoce (Uni v. of Washington Press , Seattle and London , in assoc. with New Bedford Whaling Museum , 400pp , illus, $29.95) . By the mid-nineteenth century , the whaling grounds in the North and South Atlantic had effecti vely been exhausted , and the industry so integral to the New England economy directed its energies to the Pacific. In I 848 , when the bark Superior, Captain Thomas Roys , of Sag Harbor, ventured north of the Bering Strait and discovered the rich Arctic whaling grounds, United States whalers became a permanent fi xture in the region. It was their increased presence that led indirectly to the annexation of Hawai i, the purchase of Alaska and the discovery of the Prudhoe Bay oil fie lds. In his comprehensive Wlwles, Ice and Men, John R. Bockstoce tells the story of commercial whaling in the Western Arctic. Curator of Ethnology at the Old Dartmouth Historical Society Whaling Museum in Massachusetts, Bockstoce writes that &quot; this book began on the ice of the Chukchi Sea one night in 1971 ,&#39; &#39; when he participated in his first whale hunt, in an I 8ft sealskin-covered umiak. For the next ten years, Bockstoce studied the area and its archaeological legacy in travels that took him through the Bering, Beaufort and Chukchi seas. The result of his prodigious labors is a livi ng history whose focus is on the history of the Arctic whalemen themselves, on their day-to-day routines and on the vicissitudes of their industry from 1848 to its eventual collapse in 1908. Bockstoce does an expert job of recreating li fe on board ships whose voyages often lasted more than four years. With painstaking detail , he describes the outfitting of a whaleship, the voyage out , the pursuit and capture of bowheads, the cutting in and processing of blubber and the stripping of whalebone. All this is set against the rapid growth of the Arctic grounds after Roys &#39; discovery of 1848 (and the subsequent shudders in the oil and baleen markets) and the extraordinary hardships the whalemen endured through the grueling Arctic weather. Bockstoce does an efficient job of capturing the period with his unimposing use of whaling term inology , primary sources and , especially, vintage photographs and illustrations. If his prose is sometimes too economical to evoke the high drama of, say , the entire fleet being caught in the pack ice, his passion for his subject is

apparent, and his scholarship is never in doubt. HAL FESSENDEN Mr. Fessenden is a frequent contributor to SEA HrSTORY and sits on the Publications Committee of the NMHS. The Commodore, Jan de Hartog (Harper &amp; Row , New York, 1986 , 406pp , $ 19 .95). A &quot; rattling good yarn of the sea&quot; indeed , and a good deal more besides: not onl y mode m towboat technology but ageing, racism, Stone Age people coping with the modem world , and international financial high-jinks at sea and ashore. The Commodore tell s his tale in the first person , as he did in de Hartog&#39;s 1965 best-se ller, The Captain. This time Marti nus H arin xma, now 70, is called out of retirement to &quot; advise&quot; the young and inexperienced captain of the world &#39; s most powerful , and &quot;fatall y fla wed, &quot; tu gboat, towi ng a giant dry dock from Rotterdam to Ri o . The crew is Chinese , from Taiwan, the runners on the tow are their ene mies from another island , and the European officers have been assigned to the man-ki lling tug for previous derelictions o n other ships owned by the big Dutch to wing and salvage company. Harinxma gradual ly comes to identify with both the ship and the crew , and is led by that identification to agree to take the tow from Rio th rough the stormbe lts of both Atla ntic and Pacific to its destination in Chile; and then , self-described stubborn o ld bastard that he is, to pick up yet another monster tow and take it to Taiwan. Along the way, he solves the &quot; fata l flaw&quot; of the pig in the literally most ex plosive fas hion imaginable . This is a real page-turner, tightly plotted, populated by a variety of both engaging and sinister characters, marked by incidents both dramatic and moving. Commodore Harinxma emerges as complex, doubt-torme nted, but resolute in action: a genuine hero of the sea; and, in the end, of the land as well, in his confrontation with the owners and operators of this big and dangerous vessel. The Commodore is unhesitatingly recommended to all readers of SEA HISTORY. CHARLES G. BOLTE