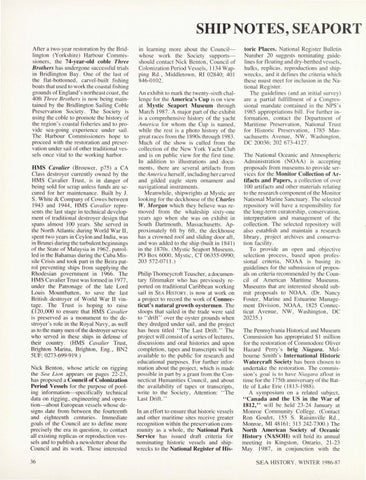 SHIP NOTES, SEAPORT After a two-year restoration by the Bridlington (Yorkshire) Harbour Commissioners, the 74-year-old coble Three Brothers has undergone successful trials in Bridlington Bay. One of the last of the fl at-bottomed , carvel-built fishin g boats that used to work the coastal fi shing grounds of Eng land &#39;s northeast coast , the 40ft Three Brothers is now being maintai ned by the Bridlington Sailing Coble Preservation Society . The Society is using the coble to promote the hi story of the region &#39;s coastal fisheries and to provide sea-going experience under sail. The Harbour Commi ss ioners hope to proceed with the restoration and preservation under sail of other traditional vessels once vital to the working harbor. HMS Cavalier (Brouwer, p75) a CA Class destroyer currently owned by the HMS Cavalier Trust, is in danger of being so ld for scrap unless funds are secured for her maintenance. Built by J. S. White &amp; Company of Cowes between 1943 and 1944, HMS Cavalier represents the last stage in technical development of traditional destroyer design that spans almost I 00 years . She served in the North Atlantic during World War II , spent two years in Ceylon and India, was in Brunei during the turbule nt beginnings of the State of Malaysia in 1962 , patrolled in the Bahamas durin g the Cuba Mi ssile Crisis and took part in the Beira patrol preventing ships from supplying the Rhodesian government in 1966 . The HMS Cavalier Trust was formed in 1977 , under the Patronage of the late Lord Louis Mountbatten , to save the last British destroyer of World War II vintage . The Trust is hoping to raise ÂŁ 120 ,000 to ensure that HMS Cavalier is preserved as a monument to the destroyer&#39;s role in the Royal Navy , as well as to the many men of the destroyer service who served in these ships in defense of their country. (HMS Cavalier Trust, Brighton Marina , Brighton, Eng., BN2 5UF; 0273-699-919 .) Nick Benton, whose article on rigging the Sea Lion appears on pages 22-23 , has proposed a Council of Colonization Period Vessels for the purpose of pool ing information-specifica ll y technical data on ri gging, engineering and operation-about European vessels whose designs date from between the fourteenth and eighteenth centuries . Immediate goals of the Council are to define more preci sely the era in question, to contact all existing replicas or reproduction vessels and to publi sh a newsletter about the Council and its work . Those interested 36

in learning more about the Councilwhose work the Society supportsshould contact Nick Benton, Council of Colonization Period Vessels , 11 34 Wapping Rd ., Middletown, RI 02840; 401 846-0102. An exhibit to mark the twenty-s ixth challenge for the America&#39;s Cup is on view at Mystic Seaport Museum throu gh March 1987. A major part of the exhibit is a comprehensive history of the yacht America for whom the Cup is named , while the rest is a photo hi story of the great races from the 1890s throu gh 1983. Much of the show is cull ed from the collection of the New York Yacht C lu b and is on public view for the first time. In addition to illu strations and documents , there are several art ifacts from the America herself, including her carved and gilded eagle stern ornament and navigational instnlments. Meanwhile , shipwrights at Mystic are looking for the deck house of the Charles W. Morgan which they believe was removed from the whaleship sixty-one years ago when she was on ex hibit in South Dartmouth, Massachusetts. Approximately 6ft by 6ft , the deckhouse has a crowned roof and sliding door aft, and was added to the ship (built in 184 1) in the 1870s. (Mystic Seaport Museum , PO Box 6000 , Mystic , CT 06355-0990; 203 572-0711 .) Philip Thomeycroft Teuscher, a documentary filmmaker who has prev iously reported on traditional Caribbean working sail in SEA HISTORY , is now at work on a project to record the work of Connecticut&#39;s natural growth oystermen . The sloops that sailed in the trade were said to &quot; drift &quot; over the oyster grounds when they dredged under sail , and the project has been titled &quot; The Last Drift. &quot; The project will consist of a series of lectures , discussions and oral hi stories and upon completion, tapes and transcripts will be ava il ab le to the public for research and educational purposes. For further information about the project , wh ich is made poss ible in part by a grant from the Connecticut Humanities Counci l, and abo ut the ava il ab ility of tapes or transcripts , write to the Society , Attention: &quot; The Last Ori ft. &quot; In an effort to ens ure that hi storic vessels and other maritime sites receive greater recognition within the preservation community as a whole , the National Park Service has issued draft criteria for nominating hi storic vessels and shipwrecks to the National Register of His-

toric Places. National Register Bulletin Number 20 suggests nominating guidelines for floating and dry-berthed vessels , hulks , replicas, reproductions and shipwrecks , a nd it defines the criteria which these mu st meet for inclusion in the National Register. The gu ide lines (and an initial survey) are a partial fulfillment of a Congressional mandate contained in the NPS &#39; s 1985 appropriations bill. For further information, contact the Department of Maritime Preservation, Nationa l Trust for Hi storic Preservation , 1785 Massachusetts Avenue, NW, Washington, DC 20036; 202 673-4 127 . The National Oceanic and Atmospheric Administration (NOAA) is accepting proposals from museums to provide services for the Monitor Collection of Artifacts and Papers, a collection of over I 00 artifacts and other materials re lating to the research component of the Monitor National Marine Sanctuary. The selected repository will have a responsibility for the long-term curatorship , conservation, interpretation and management of the collection. The selected repository will also establish and maintain a research library , project archives and conservation faci lity. To provide an open and objecti ve selection process, based upon professional criteria, NOAA is basing its guidelines for the su bmi ss ion of proposals on criteria recommended by the Counci l of American Maritime Museums. Museums that are interested should submit proposals to NOAA. (Dr. Nancy Foster , Marine and Estuarine Management Division , NOAA , 1825 Connecticut A venue , NW , Washington, DC 20235.) The Pennsylvania Historical and Museum Commission has appropriated $ I million for the restoration of Commodore O liver Hazard Perry &#39;s brig Niagara. Melbourne Smith &#39;s International Historic Watercraft Society has been chosen to undertake the restoration. The comm ission &#39; s goal is to have Niagara afloat in time for the I 75th anniversary of the Battle of Lake Erie ( 18 13- 1988). A symposium on a re lated subject , &quot;Canada and the US in the War of 1812,&quot; will be he ld 23 -24 January at Monroe Community College. (Contact Ron Gou let, 155 S . Raisinville Rd. , Monroe , Ml 48161 ; 3 13 242-7300.) The North American Society of Oceanic History (NASOH) will hold its annua l meetirug in Kin gston , Ontario , 2 1-23 May 1987 , in conjunction with the SEA HISTORY , WINTER 1986-87