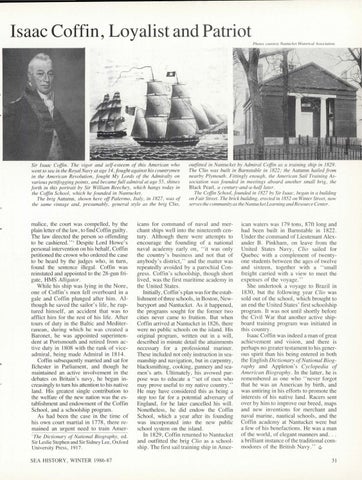 Sir Isaac Coffin. The vigor and selfesteem of this American who went to sea in the Royal Navy at age 14.fought against his countrymen in the American Revolution, fought My Lords of the Admiralty on various pettifogging points, and became full admiral at age 55 , shines forth in this portrait by Sir William Beechey, which hangs today in the Coffin School , which he founded in Nanrucket. The brig Autumn, shown here off Palermo, Italy , in 1827, was of the same vintage and, presumably, general style as the brig Clio,

malice , the court was compelled, by the plain letter of the law , to find Coffin gu ilty . The law directed the person so offending to be cashiered.&quot;&#39; Despite Lord Howe&#39;s personal intervention on his behalf, Coffin petitioned the crown who ordered the case to be heard by the judges who, in tum, found the sentence illegal. Coffin was reinstated and appointed to the 28-gun frigate , HMS Alligator. While his ship was lying in the Nore, one of Coffin&#39;s men fell overboard in a gale and Coffin plunged after him. Although he saved the sailor&#39;s life , he ruptured himself, an accident that was to afflict him for the rest of his life . After tours of duty in the Baltic and Mediterranean, during which he was created a Baronet, he was appointed superintendent at Portsmouth and retired from active duty in 1808 with the rank of vicead miral , being made Admiral in 18 14 . Coffin subsequently married and sat for llchester in Parliament, and though he maintained an active involvement in the debates on Britain&#39;s navy , he began increasingly to turn his attention to his native land. His greatest single contribution to the welfare of the new nation was the establishment and endowment of the Coffin School, and a schoolship program. As had been the case in the time of his own co urt martial in 1778, there remained an urge nt need to train Amer, The Dictionary of National Biography, ed. Sir Leslie Stephen and Sir Sidney Lee, Oxford University Press, 1917. SEA HISTORY , WINTER 1986-87

outfitted in Nantucket by Admiral Coffin as a training ship in 1829. The Clio was built in Barnstable in 1822; the Autumn hailed from nearby Plymouth. Fittingly enough, the American Sail Training Association was founded in meetings aboard another small brig , the Black Pearl, a century-and-a-half later. The Coffin School, founded in 1827 by Sir Isaac , began in a building on Fair Street . Th e brick building, erected in 1852 on Winter Street, 110w serves the community as the Nantucket Leaming and Resource Center.

icans for command of naval and merchant ships well into the nineteenth century. Although there were attempts to enco urage the founding of a national naval academy early on, &quot; it was only the country&#39;s business and not that of anybody&#39;s district,&quot; and the matter was repeatedly avoided by a parochial Congress . Coffin &#39;s schoolship, though short lived , was the first maritime academy in the United States. Initially, Coffin&#39;s plan was forthe establishment of three schools, in Boston, Newburyport and Nantucket. As it happened, the programs sought for the former two cities never came to fruition . But when Coffin arrived at Nantucket in 1826, there were no public schools on the island. His original program , written out in a will , described in minute detail the attainments necessary for a professional mariner. These included not on ly instruction in seamanship and navigation, but in carpentry, blacksmithing, cooking, gunnery and seamen&#39;s arts. Ultimately, his avowed purpose was to educate a &quot;set of men who may prove useful to my native country. &quot; He may have considered this as being a step too far for a potential adversary of England, for he later cancelled his will. Nonetheless , he did endow the Coffin School, which a year after its founding was incorporated into the new public school system on the island. In 1829, Coffin returned to Nantucket and outfitted the brig Clio as a schoolship. The first sai l training ship in Amer-

ican waters was 179 tons, 87ft long and had been built in Barnstable in 1822. Under the command of Lieutenant Alexander B. Pinkham, on leave from the United States Navy , Clio sailed for Quebec with a complement of twentyone students between the ages of twelve and sixteen , together with a &quot; small freight carried with a view to meet the expenses of the voyage.&#39;&#39; She undertook a voyage to Brazil in 1830, but the following year Clio was sold out of the school, which brought to an end the United States&#39; first schoolship program . It was not until shortly before the Civil War that another active shipboard training program was initiated in this country. Isaac Coffin was indeed a man of great achievement and vision , and there is perhaps no greater testament to his generous spirit than hi s being entered in both the Engli sh Dictionary of National Biography and Appleton &#39; s Cyclopedia of American Biography. In the latter, he is remembered as one who &quot;never forgo t that he was an American by birth , and was untiring in his efforts to promote the interests of his native land. Racers sent over by him to improve our breed, maps and new inventions for merchant and naval marine , nautical schools, and the Coffin academy at Nantucket were but a few of his benefactions. He was a man of the world , of elegant manners and .. . a brilliant instance of the traditional commodores of the British Navy.&#39;&#39; J, 31