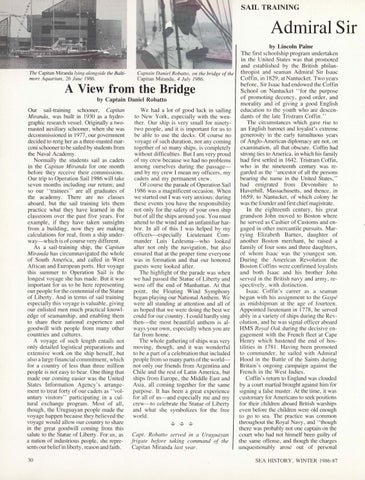 The Capitan Miranda lying alongside the Baltimore Aquarium , 26 June 1986.

The first schoolship program undertaken in the United States was that promoted and established by the British philanCaptain Daniel Robatto, on the bridge of the thropist and seaman Admiral Sir Isaac Coffin, in 1829, at Nantucket. Two years Capitan Miranda, 4 July 1986. before, Sir Isaac had endowed the Coffin School on Nantucket &quot;for the purpose of promoting decency, good order, and Daniel Robatto morality and of giving a good English education to the youth who are descenWe had a lot of good luck in sailing dants of the late Tristram Coffin.&quot; to New York, especially with the weaThe circumstances which gave rise to ther. Our ship is very small for ninetyan English baronet and loyalist&#39;s extreme two people , and it is important for us to generosity in the early tumultuous years be able to use the decks. Of course no of Anglo-American diplomacy are not , on voyage of such duration , nor any coming examination , all that obscure. Coffin had together of so many ships, is completely strong ties to America, in which his family without difficulties. But I am very proud had first settled in 1642 . Tris tram Coffin, of my crew because we had no problems who in the nineteenth century was reamong ourselves during the passagegarded as the &quot;ancestor of all the persons and by my crew I mean my officers , my bearing the name in the United States,&quot; cadets and my permanent crew. had emigrated from Devonshire to Of course the parade of Operation Sail Haverhill , Massachusetts , and thence, inÂˇ 1986 was a magnificent occasion. When 1659, to Nantucket, of which colony he we started out I was very anxious: during was the founder and first chief magistrate. these events you have the responsibility In the eighteenth century, his great not only for the safety of your own ship grandson John moved to Boston where but of all the ships around you. You must he served as Cashier of Customs and enattend to the wind and an unfamiliar hargaged in other mercantile pursuits . Marbor. In all of this I was helped by my rying Elizabeth Barnes, daughter of officers--especially Lieutenant Comanother Boston merchant, he raised a mander Luis Ledesma-who looked family of four sons and three daughters , after not only the navigation, but also of whom Isaac was the youngest son. ensured that at the proper time everyone During the American Revolution the was in formation and that our honored Boston Coffins were confirmed loyalists guests were looked after. and both Isaac and his brother John The highlight of the parade was when served in the British navy and army, rewe had passed the Statue of Liberty and spectively, with distinction. were off the end of Manhattan. At that Isaac Coffin &#39; s career as a seaman point, the Floating Wind Symphony began with his assignment to the Gaspe began playing our National Anthem. We as midshipman at the age of fourteen. were all standing at attention and all of Appointed lieutenant in 1778, he served us hoped that we were doing the best we ably in a variety of ships during the Revcould for our country. l could hardly sing olution , and he was signal officer aboard then-the most beautiful anthem is always your own, especially when you are HMS Royal Oak during the decisive engagement with the French fleet at Cape far from home . Henry which hastened the end of hosThe whole gathering of ships was very tilities in 1781. Having been promoted moving, though , and it was wonderful to commander, he sailed with Admiral to be a part of a celebration that included Hood in the Battle of the Saints during people from so many parts of the worldBritain&#39;s ongoing campaign against the not only our friends from Argentina and French in the West Indies. Chile and the rest of Latin America, but Coffin&#39;s return to England was clouded ships from Europe , the Middle East and Asia, all coming together for the same by a court martial brought against him for signing a false muster. At the time, it was purpose. It has been a great experience customary for Americans to seek positions for all of us-and especially me and my for their children aboard British warships crew-to celebrate the Statue of Liberty even before the children were old enough and what she symbolizes for the free world. to go to sea. The practice was common throughout the Royal Navy, and &quot; though there was probably not one captain on the Capt. Robauo served in a Uruguayan court who had not himself been guilty of frigate before taking command of the tlhe same offense, and though the charges unquestionably arose out of personal Capitan Miranda last year.

A View from the Bridge by Captain Our sail-training schooner, Capitan Miranda, was built in 1930 as a hydrographic research vessel. Originally a twomasted auxiliary schooner, when she was decommissioned in 1977, our government decided to rerig her as a three-masted marconi schooner to be sailed by students from the Naval Academy. Normally the students sail as cadets in the Capitan Miranda for one month before they receive their commissions. Our trip to Operation Sail 1986 will take seven months including our return ; and so our &quot; trainees &quot; are all graduates of the academy. There are no classes aboard, but the sail training lets them practice what they have learned in the classroom over the past five years. For example, if they have taken sunsights from a building , now they are making calculations for real, from a ship underway-which is of course very different. As a sail-training ship, the Capitan Miranda has circumnavigated the whole of South America, and called in West African and European ports . Her voyage this summer to Operation Sail is the longest voyage she has made. But it was important for us to be here representing our people for the centennial of the Statue of Liberty. And in terms of sail training especially this voyage is valuable, giving our enlisted men much practical knowledge of seamanship , and enabling them to share their national experience and goodwill with people from many other countries and cultures . A voyage of such length entails not only detailed logistical preparations and extensive work on the ship herself, but also a large financial commitment, which for a country of less than three million people is not easy to bear. One thing that made our coming easier was the United States Information Agency&#39;s arrangement to treat forty of our cadets as &quot; voluntary visitors&quot; participating in a cultural exchange program . Most of all, though , the Uruguayan people made the voyage happen because they believed the voyage would allow our country to share in the great goodwill coming from this salute to the Statue of Liberty. For us , as a nation of industrious people, she represents our belief in liberty , reason and faith. 30