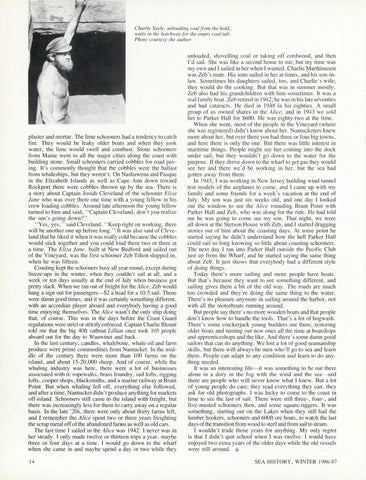 Charlie Sayle , unloading coal from the hold, waits in the hatchway for the empty coal tub. Photo courtesy the author.

plaster and mortar. The lime schooners had a tendency to catch fire. T hey wou ld be leaky older boats and when they took water, the lime wo uld swell and combust. Stone schooners from Maine went to all the major cities along the coast with building stone. Small schooners carried cobb les for road paving. It &#39;s commonly thought that the cobbles were the ballast from whaleships, but they weren&#39;t. On Nashawena and Pasque in the Elizabeth Islands as well as Cape Ann down toward Rockport there were cobbles thrown up by the sea. There is a story abo ut Captain Josiah Cleveland of the schooner Eliza Jane who was over there one time with a young fellow in hi s crew loading cobbles. Around late afternoon the young fellow turned to him and said, &quot;Captain C leveland, don &#39; t you realize the sun &#39;s going down ?&quot; &quot; Yes , yes,&quot; said Cleveland . &quot; Keep right on working, there will be another one up before long.&#39;&#39; It was also said of Cleveland that he liked it when it was really cold because the cobbles would stick together and you could load them two or three at a time. The Eliza Ja ne, built at New Bedford and sailed out of the Vineyard, was the first schooner Zeb Tilton shipped in, when he was fifteen. Coasting kept the schooners busy all year round , except during freeze- ups in the winter, when they couldn &#39;t sai l at all , and a week or ten days usually at the end of July when business got pretty slack. When we ran out of frei ght for the Alice, Zeb would hang a sign out for passengers-$2 a head for a 10-5 sail. Those were damn good times , and it was certainly something different, with an accordian player aboard and everybody having a good time enjoying themselves. The Alice wasn&#39;t the only ship doing that , of course. This was in the days before the Coast Guard regulations were strict or strictly enforced. Captain Charlie Blount told me that the big 40ft catboat Lillian once took I 05 people aboard out for the day to Wauwinet and back . In the last century, candles, whalebone, whale oil and farm produce were prime commod ities from Nantucket. In the middle of the century there were more than I 00 farms on the island , and about 15-20,000 sheep. And of course, while the whaling industry was here, there were a lot of businesses assoc iated with it: ropewalks, brass fou ndry, sai l lofts, rigging lofts, cooper shops, blacksm iths, and a marine railway at Brant Point. But when whaling fe ll off, everythin g else fo llowed, and after a time, Nantucket didn&#39;t produce anything for markets off-island . Schooners sti ll came to the island with freight , but there was increasingly less fo r them to carry away on a regular basis. In the late &#39;20s, there were on ly about thirty farms left , and I remember the Alice spent two or three years freighting the scrap metal off of the abandoned farms as well as old cars. The last time I sailed in the Alice was 1942. I never was in her steady. I on ly made twelve or thirteen trips a year, maybe three or fo ur days at a time. I would go down to the wharf when she came in and maybe spend a day or two while they 14

unloaded, shovelling coal or taking off cordwood, and then I&#39;d sai l. She was like a second home to me; but my time was my own and I sailed in her when I wanted. Charlie Marthinusen was Zeb&#39;s mate. His sons sailed in her at times, and his son-inlaw . Sometimes his daughters sai led, too, and Charlie &#39; s wife; they would do the cooking. But that was in summer mostly. Zeb also had hi s grandchi ldren with him sometimes . It was a real fami ly boat. Zeb retired in 1942; he was in his late seventies and had cataracts . He died in 1948 in his eighties. A small group of us owned shares in the Alice, and in 1943 we sold her to Parker Hall for $600. He was eighty-two at the time . When she went, most of the people in the Vineyard (where she was registered) didn&#39;t know about her. Nantucketers knew more about her, but over there you had three or four big towns, and here there is only the one. But there was little interest in maritime things . People might see her coming into the dock under sail , but they wouldn&#39;t go down to the water for the purpose. If they drove down to the wharf to get gas they would see her and there we &#39; d be working in her, but the sea had gotten away from them. In 1943, I was working in New Jersey building wind tunnel test models of the airplanes to come, and I came up with my fami ly and some friends for a week &#39;s vacation at the end of July . My son was just six weeks old , and one day I looked out the window to see the Alice rounding Brant Point with Parker Hall and Zeb, who was along for the ride. He had told me he was going to come see my son. That night, we were all down at the Stetson House with Zeb , and I started dragging stories out of him about the coasting days. At some point he started saying he didn &#39;t understand how the hell Parker Hall could sail so long knowing so little about coasting schooners. The next day I ran into Parker Hall outside the Pacific C lub just up from the Wharf, and he started saying the same thing about Zeb. It just shows that everybody had a different style of doing things. Today there &#39;s more sai ling and more people have boats. But that&#39;s because they want to see something different , and sailing gives them a bit of the o ld way. The roads are much too crowded and they &#39; re doing the same thing to the water. There&#39;s no pleasure anymore in sai ling around the harbor, not with all the motorboats running around. But people say there &#39;s no more wooden boats and that people don&#39;t know how to handle the tool s. That&#39;s a lot of hogwash. There&#39;s some crackerjack young builders out there, restoring o lder boats and turning out new ones all the time at boatshops and apprenticeshops and the like. And there&#39;s some damn good sailors that can do any thing. We lost a lot of good seamanship skill s, but there wi ll always be men who&#39;ll go to sea and learn them. People can adapt to any condition and learn to do anything needed. It was an interesting life- it was something to be out there alone in a dory in the fog with the wind and the sea- and there are people who wi ll never know what I knew. But a lot of young people do care; they read everything they can, they ask for old photographs. I was-Jucky to come to the coast in time to see the last of sai l. Therewere still three- , four-, and five-masted schooners then, and some square-riggers . It was something , starting out on the Lakes when they still had the lumber hookers, schooners and 600ft ore boats, to watch the last days of the transition from wood to steel and from sail to steam. I wou ldn&#39;t trade those years for anything. My onl y regret is that I didn&#39;t quit school when I was twe lve. I would have enjoyed two extra years of the older days while the old vessels were sti II around. Ji SEA HISTORY , W INTER 1986-87