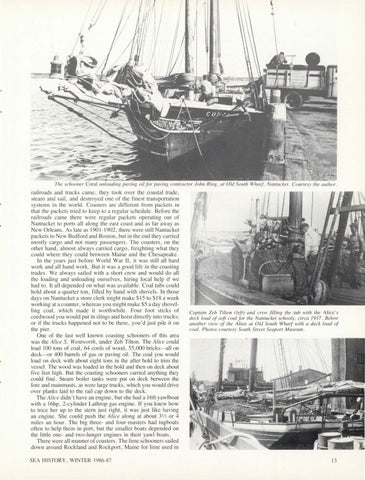 railroads and trucks came, they took over the coastal trade , steam and sail , and destroyed one of the finest transportati on systems in the wo rld . Coasters are different from packets in that the packets tried to keep to a regular schedul e. Before the railroads came there were regular packets operating out of Nantucket to ports all along the east coast and as far away as New Orleans. As late as 1901-1902, there were still Nantucket packets to New Bedford and Boston , but in the end they carri ed mostly cargo and not many passengers . The coasters, on the oth er hand , almost always carried cargo, freighting what they co uld where they could between Maine and the Chesapeake. In th e years just before World War II , it was still all hard work and all hand work. But it was a good life in the coasting trades. We always sailed with a short crew and would do all the loading and unloading ourselves , hiring local help if we had to. It all depended on what was ava il able. Coal tubs cou ld hold about a quarter ton , filled by hand with shove ls. In those days on Nantucket a store clerk might make $ 15 to $ 18 a week working at a counter, whereas you might make $5 a day shovelling coa l, wh ich made it worthwhile. Four foot sti cks of cordwood you would put in slings and ho ist directl y into trucks; or if the trucks happened not to be there, you &#39; d just pile it on the pier. One of the last well known coasting schooners of this area was the Alice S. Wentworth, under Zeb Tilton. The Alice could load 100 tons of coal, 64 cords of wood , 55,000 bricks-all on deck--0r 400 barrels of gas or paving oil. The coal you would load on deck with about eight tons in the after hold to trim the vessel. The wood was loaded in the hold and then on deck about five feet high . But the coasting schooners carried anything they could find . Steam boiler tanks were put on deck between the fore and mainmasts , as were large trucks, which you would drive over planks laid to the rai l cap down to the deck. The Alice didn &#39; t have an engine, but she had a I 6ft yawlboat with a I 6hp, 2-cylinder Lathrop gas eng ine. If yo u knew how to trice her up to the stern just ri ght , it was just like having an engine . She could push the Alice along at about 3 1/2 or 4 miles an hour. The big three- and fo ur-masters had tugboats often to help them in port , but the smaller boats depended on the little one- and two-lun ge r engines in th eir yaw l boats . There were all manner of coasters. The lime schooners sailed down around Rockland and Rockport, Maine for lime used in SEA HISTORY, WINTER 1986-87

Captain Zeb Tilton (left) and crew filling the tub with the Alice&#39;s deck load of soft coal for the Na ntucket schools, circa 1937 . Below another view of the Alice at Old South Wharf with a deck load of coal. Photos courtesy South Street Seaport Museum.