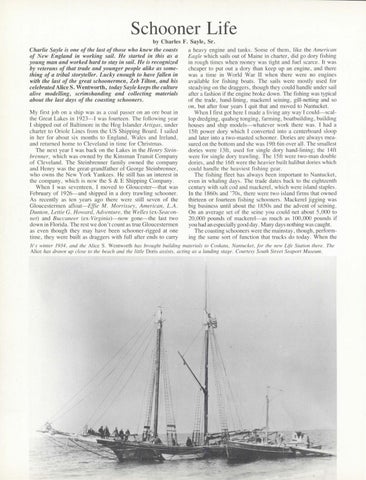 Schooner Life by Charles F. Sayle, Sr. a heavy engine and tanks . Some of them, like the American Charlie Sayle is one of the last of those who knew the coasts of New England in working sail. He started in this as a Eagle which sails out of Maine in charter, did go dory fishing in rough times when money was tight and fuel scarce. It was young man and worked hard to stay in sail. He is recognized cheaper to put out a dory than keep up an engine, and there by veterans of that trade and younger people alike as somewas a time in World War II when there were no engines thing of a tribal storyteller. Lucky enough to have fallen in available for fishing boats. The sails were mostly used for with the last of the great schoonermen, Zeb Tilton, and his celebrated Alice S. Wentworth, today Sayle keeps the culture steadying on the draggers , though they could handle under sail after a fashion if the engine broke down . The fishing was typical alive modelling, scrimshanding and collecting materials about the last days of the coasting schooners. of the trade, hand-lining, mackerel seining , gill-netting and so My first job on a ship was as a coal passer on an ore boat in the Great Lakes in 1923-1 was fourteen. The following year I shipped out of Baltimore in the Hog Islander Artigas , under charter to Oriole Lines from the US Shipping Board . I sailed in her for about six months to England, Wales and Ireland , and returned home to Cleveland in time for Christmas. The next year I was back on the Lakes in the Henry Steinbrenner, which was owned by the Kinsman Transit Company of Cleveland. The Steinbrenner family owned the company and Henry was the great-grandfather of George Steinbrenner, who owns the New York Yankees. He still has an interest in the company , which is now the S &amp; E Shipping Company. When I was seventeen, I moved to Gloucester-that was February of 1926-and shipped in a dory trawling schooner. As recently as ten years ago there were still seven of the Gloucestermen afloat-Effie M. Morrissey , American, L.A. Dunton, Lettie G. Howard, Adventure, the Welles (ex-Seaconnet) and Buccaneer (ex-Virginia)-now gone-the last two down in Florida. The rest we don &#39; t count as true Gloucestermen as even though they may have been schooner-rigged at one time , they were built as draggers with full after ends to carry

on , but after four years I quit that and moved to Nantucket. When I first got here I made a living any way I could-scallop dredging, quahog tonging , farming , boatbuilding , building houses and ship models-whatever work there was. I had a l 5ft power dory which I converted into a centerboard sloop and later into a two-masted schooner. Dories are always measured on the bottom and she was I 9ft 6in over all. The smallest dories were l 3ft, used for single dory hand-lining; the l 4ft were for single dory trawling. The l 5ft were two-man double dories, and the I 6ft were the heavier built halibut dories which could handle the heaviest fishing gear. The fishing fleet has always been important to Nantucket , even in whaling days. The trade dates back to the eighteenth century with salt cod and mackerel , which were island staples. In the 1860s and &#39;70s, there were two island firms that owned thirteen or fourteen fishing schooners. Mackerel jigging was big business until about the 1850s and the advent of seining . On an average set of the seine you could net about 5 ,000 to 20 ,000 pounds of mackerel-as much as 100,000 pounds if you had an especially good day. Many days nothing was caught. The coasting schooners were the mainstay , though , performing the same sort of function that trucks do today . When the

It&#39;s winter 1934, and the Alice S. Wentworth has brought building materials to Coskata , Nantucket , f or the new Life Station there. Th e Alice has drawn up close to the beach and the lillle Doris assists, acting as a landing stage. Courtesy South Street Seaport Museum.