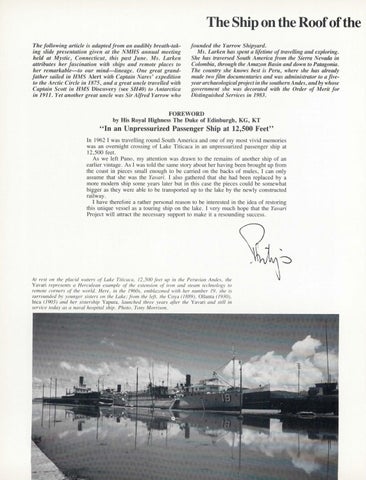 The Ship on the Roof of the The following article is adapted from an audibly breath-taking slide presentation given at the NMHS annual meeting held at Mystic, Connecticut, this past June. Ms. Larken attributes her fascination with ships and remote places to her remarkable-to our mind-lineage. One great grandfather sailed in HMS Alert with Captain Nares&#39; expedition to the Arctic Circle in 1875, and a great uncle travelled with Captain Scott in HMS Discovery (see SH40) to Antarctica in 1911. Yet another great uncle was Sir Alfred Yarrow who

founded the Yarrow Shipyard. Ms. Larken has spent a lifetime of travelling and exploring. She has traversed South America from the Sierra Nevada in Colombia, through the Amawn Basin and down to Patagonia. The country she knows best is Peru, where she has already made two film documentaries and was administrator to a fiveyear archaeological project in the southern Andes, and by whose government she was decorated with the Order of Merit for Distinguished Services in 1983.

FOREWORD by His Royal Highness The Duke of Edinburgh, KG, KT

&quot;In an Unpressurized Passenger Ship at 12,500 Feet&quot; In 1962 I was travelling round South America and one of my most vivid memories was an overnight crossing of Lake Titicaca in an unpressurized passenger ship at 12,500 feet. As we left Puno , my attention was drawn to the remains of another ship of an earlier vintage. As I was told the same story about her having been brought up from the coast in pieces small enough to be carried on the backs of mules, I can only assume that she was the Yavari. I also gathered that she had been replaced by a more modem ship some years later but in this case the pieces cou ld be somewhat bigger as they were able to be transported up to the lake by the newly constructed railway. I have therefore a rather personal reason to be interested in the idea of restoring this unique vessel as a touring ship on the lake. I very much hope that the Yavari Project will attract the necessary support to make it a resounding success.

At rest on the placid waters of Lake Titicaca, 12,500 feel up in the Peruvian Andes, the Yavari represents a Herculean example of the extension of iron and steam technology to remote corners of&quot; the world. Here , in the 1960s, emblazoned with her number 19, she is surrounded by younger sisters on the Lake; ji-0111 the le.fi, the Coya ( 1889) , Ollanta ( 1930), Inca ( 1903) and her sistership Yapura. launched three years after the Yavari and still in service today as a naval hospital ship. Photo, Tony Morrison.