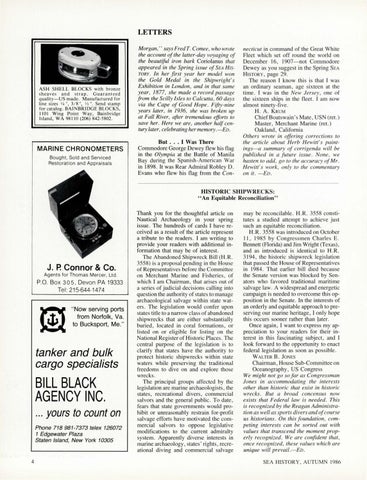 Morgan,&quot; says Fred T. Comee, who wrote the account of the latter-day voyaging of the beautiful iron bark Coriolanus that appeared in the Spring issue of SEA HtsTORY. In her first year her model won the Gold Medal in the Shipwright&#39;s Exhibition in London, and in that same year, 1877, she made a record passage from the Scilly Isles to Calcutta , 60 days via the Cape of Good Hope. Fifty-nine years later, in 1936, she was broken up at Fall River, after tremendous efforts to save her. Here we are, another half century later, celebrating her memory.-Eo .

MARINE CHRONOMETERS Boug ht , So ld and Serviced Re storation and Appra isals

Commodore George Dewey flew his flag in the Olympia at the Battle of Mani la Bay durin g the Spanish-American War in 1898. It was Rear Admiral Robley D . Evans who flew his flag from the Con-

necticut in command of the Great White Fleet which set off rou nd the world on December 16, 1907-not Commodore Dewey as you suggest in the Spring SEA HISTORY , page 29. The reason I know this is that I was an ordinary seaman, age sixteen at the time . I was in the New Jersey, one of the sixteen shi ps in the fleet. I am now almost ninety-five. H. A . KR UM Chief Boatswai n&#39; s Mate , USN (ret.) Master, Merchant Marine (ret.) Oakland , Cali fo rnia Others wrote in offering corrections to the article about Herb Hewitt&#39;s paintings-a summary of corrigenda will be published in a future issue . None , we hasten to add, go to the accuracy of Mr . Hewitt&#39;s work, only to the commentary on it. - Eo .

Thank you for the thoughtful article on Nautical Archaeology in your spring issue . The hundreds of cards I have received as a result of the article represent a tribute to the readers. I am writing to provide your readers with additional information that may be of interest. The Abandoned Shipwreck Bill (H .R. 3558) is a proposal pend ing in the House of Representati ves before the Committee on Merchant Marine and Fisheries, of which I am Chairman, that ari ses out of a series of judicial decisions call ing into question the authority of states to manage archaeological salvage within state waters. The legislation would confer upon states title to a narrow class of abandoned shipwrecks that are either substanti all y buried , located in coral fo rmations, or listed on or eligible fo r listing on the National Register of Hi storic Places . The centra l purpose of the legislation is to cl arify that states have the authority to protect historic shipwrecks within state waters whi le preserving the traditional freedoms to dive on and explore those wrecks. The principal groups affected by the legislation are marine archaeologists, the states , recreational di vers, commerc ial salvors and the general public . To date , fears that state governments would prohibit or unreasonably restra in fo r-profi t salvage efforts have moti vated the commercial salvors to oppose legislati ve modifications to the current admi ralty system . Apparentl y diverse interests in marine archaeology, states&#39; ri ghts, recreational diving and commercial salvage

may be reconcilable . H .R. 3558 constitutes a studied attempt to ac hieve just such an equi table reconc iliation. H.R. 3558 was introduced on October 11 , 1985 by Congressme n Charles E. Bennett (Florida) and Jim Wright (Texas) , and as introduced is identical to H .R . 3 194 , the hi storic shipwreck legislation that passed the House of Representati ves in 1984 . T hat earlier bill died because the Senate version was blocked by Senators who favored traditional maritime salvage law. A widespread and energetic campaign is needed to overcome this opposition in the Senate . In the interests of an orderly and equitable approach to preserving our marine heritage, I onl y hope this occurs sooner rather than \ater . Once agai n, I want to express my appreciation to your readers for their interest in this fasci nating subject, and I look forward to the opportunity to enact federa l legislation as soon as possible . WALTER B. JONES Chairman, House Sub-Committee on Oceanography, US Congress We might not go so fa r as Congressman Jones in accommodating the interests other than historic that exist in historic wrecks. But a broad concensus now exists that Federal law is needed. This is recognized by the Reagan Administration as well as sports divers and ofcourse us historians . On this fo undation, competing interests can be sorted out with values that transcend the moment properly recognized . We are confident that, once recognized, these values which are unique will prevail.-Eo. SEA HI STORY, AUTUMN 1986