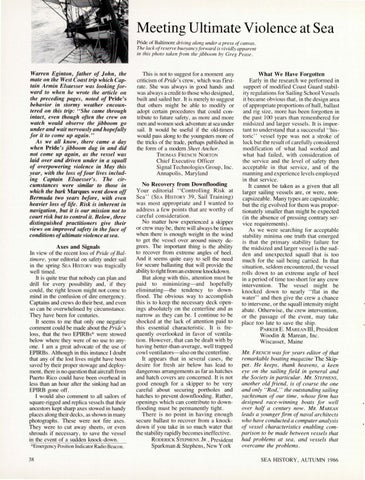 Meeting Ultimate Violence at Sea Pride of Baltimore driving along under a press of canvas. The lack of reserve buoyancy forwa rd is vividly apparent in this photo taken from the jibboom by G reg Pease .

Warren Eginton, father of John , the mate on the West Coast trip which Captain Armin Elsaesser was looking forward to when he wrote the article on the preceding pages, noted of Pride&#39;s behavior in stormy weather encountered on this trip: &quot;She came through intact, even though often the crew on watch would observe the jibboom go under and wait nervously and hopefully for it to come up again. &quot; As we all know, there came a day when Pride&#39;s jibboom dug in and did not come up again, as the vessel was laid over and driven under in a squall of overpowering violence in May this year, with the loss offour lives including Captain Elsaesser&#39;s. The circumstances were similar to those in which the bark Marques went down off Bermuda two years before, with even heavier loss of life. Risk is inherent in navigation, but it is our mission not to court risk but to control it. Below, three distinguished practitioners give their views on improved safety in the face of conditions of ultimate violence at sea. Axes and Signals In view of the recent loss of Pride of Baltimore, your editorial on safety under sail in the spring SEA HISTORY was tragically well timed. It is quite true that nobody can plan and drill fo r every possibility and, if they could , the right lesson might not come to mind in the confusion of dire emergency. Captains and crews do their best, and even so can be overwhelmed by circumstance . They have been for centuries. It seems to me that only one negative comment could be made about the Pride&#39;s loss , that the two EPIRBs* were stowed below where they were of no use to anyone. I am a great advocate of the use of EPIR.Bs. Although in this instance I doubt that any of the lost lives might have been saved by their proper stowage and deployment , there is no question that aircraft from Puerto Rico could have been overhead in less than an hour after the sinking had an EPIRB gone off. I would also comment to all sailors of square-rigged and replica vessels that their ancestors kept sharp axes stowed in handy places along their decks , as shown in many photographs. These were not fire axes . They were to cut away sheets, or even shrouds if necessary, to save the vessel in the event of a sudden knock-down . *Emergency Position Indicator Radio Beacon .

This is not to suggest for a moment .any criticism of Pride&#39;s crew , which was fllfstrate. She was always in good hands and was always a credit to those who designed , built and sailed her. It is merely to suggest that others might be able to modi fy or adopt certain procedures that could contribute to future safety, as more and more men and women seek adventure at sea under sail. It would be useful if the old-timers would pass along to the youngsters more of the tricks of the trade, perhaps published in the form of a modem Sheet Anchor. THOMAS FRENCH NORTON Ch ief Executive Officer Signal Technologies Group, Inc . Annapolis , Maryland

No Recovery from Downflooding Yo ur ed itorial &quot; Co nt ro llin g Ri sk at Sea &quot; (S EA HI STORY 39, Sail Training) was most appropri ate and I wa nted to address a few points that are worthy of careful cons ideration. No matter how experienced a skipper or crew may be, there will always be times when there is enough weight in the wind to get the vessel over around ninety degrees . The important thing is the ability to recover from extreme angles of heel. And it seems quite easy to sell the need for secure ballasting that will provide the ability to right from an extreme knockdown. But along with thi s, attention must be paid to minimi zing-and hopefu ll y e liminating- the tendency to downtlood . The obvious way to accomplish this is to keep the necessary deck openings absolutely on the centerline and as narrow as they can be . I continue to be shocked at the lack of attention paid to this essential characteristic. It is frequently overlooked in favor of ventilation . However, that can be dealt with by having better-than-average, well trapped cowl ventilators-also on the centerline. It appears that in several cases, the desire for fresh air below has lead to dangerous arrangements as far as hatches and hatch covers are concerned . It is not good enough for a skipper to be very careful about securing portholes and hatches to prevent downflooding. Rather, openings which can contribute to downflooding must be permanentl y tight. There is no point in havi ng e no ugh secure ballast to recover from a knockdown if you take in so much water that the stability rapidl y becomes ineffective. RODER ICK STEPHENS . JR ., President Sparkman &amp; Stephens , New York

What We Have Forgotten Early in the research we performed in support of modified Coast Guard stability regulations for Sailing School Vessels it became obvious that, in the design area of appropriate proportions of hull , ballas t and ri g size , more has been forgotten in the past 100 years than remembered for midsized and larger vessels . It is important to understand that a successful &quot; historic&quot; vessel type was not a stroke of luck but the result of carefull y considered modification of what had worked and what had fa iled , with consideration of the serv ice and the level of safety then acceptable in that service , and of the manning and experience leve ls employed in that service. It cannot be taken as a given that all larger sailing vessels are, or were, noncapsizeable . Many types are capsizeable; but the rig evolved for them was proportionately smaller than might be expected (in the absence of pressing contrary service requirements). As we were searching for acceptable stability minima one truth that emerged is that the primary stability fa ilure for the midsized and larger vessel is the sudden and unexpected squall that is too much for the sail be ing carried. In that situation , seldom encountered , the vessel ro ll s down to an extreme angle of heel in a period of time too short for any crew intervention . The vessel might be knocked down to nearly &quot; fl at in the water&quot; and then give the crew a chance to intervene, or the squall intensity might abate . Otherwise , the crew intervention , or the passage of the event, may take place too late to save the ship . PARKER E. MAREAN III , President Woodin &amp; Marean , Inc. Wiscasset, Maine

MR. FRENCH was for years editor of that remarkable boating magazine The Skipper. He keeps, thank heavens, a keen eye on the sailing field in general and the Society in particular. MR . STEPHENS, another old friend, is of course the one and only &#39;&#39;Rod,&#39; &#39; the outstanding sailing yachtsman of our time , whose firm has designed race-winning boats for well over half a century now . MR . MAREAN leads a younger firm of naval architects who have conducted a computer analysis of vessel characteristics enabling comparison to be made between vessels that had problems at sea, and vessels that overcame the problems. SEA HISTORY , AUTUMN 1986