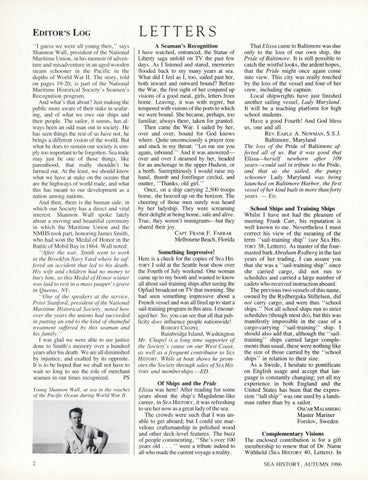 EDITOR&#39;S LOG &quot; I guess we were all young then ,&quot; says Shannon Wall , president of the National Maritime Union, in his memoir of adventure and misadventure in an aged wooden steam schooner in the Pacific in the depths of World War II. The story , told on pages 19-20, is part of the National Maritime Hi storical Society &#39;s Seamen&#39;s Recognition program. And what&#39;s that about? Just making the public more aware of their stake in seafaring, and of what we owe our ships and their people. The sai lor, it seems, has always been an odd man out in society . He has seen things the rest of us have not, he brings a different vision of the world. But what he does to sustain our society is simply too important to be forgotten. Sea trade may just be one of those things, like parenthood , that really shouldn &#39;t be farmed out. At the least, we should know what we have at stake on the oceans that are the highways of world trade, and what this has meant to our development as a nation among nations. And then, there is the human side, in which our Society has a direct and vital interest . Shannon Wall spoke lately about a moving and beauti ful ceremony in whi ch the Maritime Union and the NMHS took part, honoring James Smith, who had won the Medal of Honor in the Battle of Mobil Bay in 1864 . Wall noted: &quot; After the war, Smith went to work in the Brooklyn Navy Yard where he suffered an accident that led to his death. His wife and children had no money to bury him, so this Medal of Honor winner was laid to rest in a mass pauper&#39;s grave in Queens , NY. &quot;One of the speakers at the service, Peter Stanford, president of the National Maritime Historical Society, noted how over the years the unions had succeeded in putting an end to the kind of shameful treatment suffered by this seaman and his family .&#39;&#39; I was glad we were able to see justice done to Smith&#39;s memory over a hundred years after his death. We are all diminished by injustice, and exalted by its opposite. It is to be hoped that we shall not have to wait so long to see the role of merchant PS seamen in our times recognized. Young Shannon Wall , at sea in the reaches of the Pacific Ocean during World War II .

LETTERS A Seaman &#39;s Recognition I have watched, entranced, the Statue of Liberty saga unfold on TV the past few days. As I listened and stared, memories flooded back to my many years at sea. What did I feel as I, too, sailed past her, both inward and outward bound? Before the War, the fast sight of her conjured up visions of a good meal, girls, letters from home. Leaving, it was with regret, but tempered with visions of the ports to which we were bound. She became, perhaps, too fami liar; always there, taken for granted. Then came the War. I sailed by her, over and over, bound for God knows where. Quite unconsciously a prayer rose and stuck in my throat: &quot;Let me see you again , inbound .&quot; And it was answeredover and over I steamed by her, headed for an anchorage in the upper Hudson, or a berth. Surreptitiously I would raise my hand , thumb and forefi nger circled, and mutter, &quot; Thanks, old girl. &quot; Once, on a ship carrying 2,500 troops home , she heaved up on the horizon. The cheering of those men surely was heard by her ladyship . They were screaming their delight at being home, safe and alive. True , they weren&#39;t immigrants-but they shared their joy. CAPT. FRANK F. FARRAR Melbourne Beach, Florida

Something Impressive! Here is a check for the copies of SEA HISTORY I sold at the Seattle boat show over the Fourth of July weekend. One woman came up to my booth and wanted to know all about sail-training ships after seeing the OpSail broadcast on TV that morning. She had seen something impressive about a French vessel and was all fired up to start a sail-training program in this area. I encouraged her. So, you can see that all that publicity does influence people nationwide! ROB ERT CHAPEL Bainbridge Island , Washington Mr. Chapel is a long time supporter of the Society&#39;s cause on our West Coast, as well as a frequent contributor to SEA HISTORY. While at boat shows he promotes the Society through sales of SEA HISTORY and memberships.-ED .

Of Ships and the Pride Elissa was here! After reading for some years about the ship&#39;s Magdalene-like career, in SEA HISTORY , it was refreshing to see her now as a great lady of the sea. The crowds were such that I was unable to get aboard; but I could see marvelous craftsmanship in polished wood and other deck-level features. The buzz of people commenting, &quot;She&#39;s over 100 years old . . . &#39;&#39; were a tribute indeed to all who made the current voyage a reality.

That Elissa came to Baltimore was due only to the loss of our own ship , the Pride of Baltimore. It is still possible to catch the wistful looks, the ardent hopes, that the Pride might once again come into view . This city was reall y touched by the loss of the vessel and four of her crew, including the captain . Local shipwri ghts have just fini shed another sailing vessel, Lady Maryland. It wi ll be a teaching platform for high school students. Have a good Fourth ! And God bless us, one and all . REV.EARLE A . NEWMAN,S.S .J . Baltimore, Maryland The loss of the Pride of Baltimore affe cted all of us. But it was good that Eli ssa-herself newborn after 109 years-could sail in tribute to the Pride, and that as she sailed, the pungy schooner Lady Maryland was being launched on Baltimore Harbor, the first vessel of her kind built in more than forty years . - Eo.

School Ships and Training Ships Whil st I have not had the pleasure of meeting Frank Carr, his reputation is well known to me. Nevertheless I must correct his view of the meaning of the term &quot;sail-training ship&quot; (see SEA HISTORY 38 , Letters) . As master of the fourmasted bark Abraham Rydberg in the last years of her trading, I can assure you that she was a &quot;sai l-training ship &quot; since she carried cargo, did not run to schedules and carried a large number of cadets who received instruction aboard. The previous two vessels of this name , owned by the Rydbergska Stiftelsen , did not carry cargo, and were thus &quot;school ships.&quot; Not all school ships run to strict schedules (though most do) , but this was manifestly impossible in the case of a cargo-carrying &quot;sai l-training &quot; ship . I should also add that, although the &quot;sailtraining&quot; ships carried larger complements than usual , these were nothing like the size of those carried by the &quot;school ships&quot; in relation to their size . As a Swede , I hesitate to pontificate on English usage and accept that language is constantly changing; yet all my experience in both England and the United States has been that the expression &#39;&#39; tall ship &#39;&#39; was one used by a landsman rather than by a sailor. OSCAR MALMBERG Master Mariner Forslov, Sweden

Complementary Visions The enclosed contribution is for a gift membership to renew that of Dr. Name Withheld (SEA HISTORY 40 , Letters). In SEA HISTORY , AUTUMN 1986