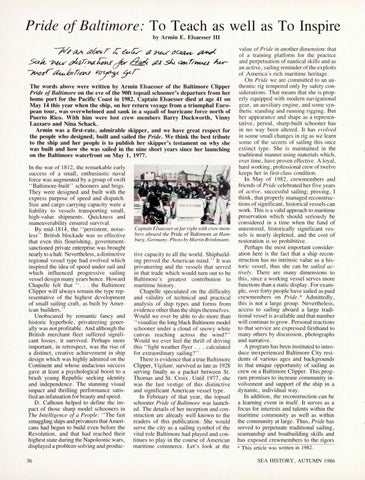 Pride of Baltimore: To Teach as well as To Inspire by Armin E. Elsaesser III-

The words above were written by Armin Elsaesser of the Baltimore Clipper Pride of Baltimore on the eve of the 90ft topsail schooner&#39;s departure from her home port for the Pacific Coast in 1982. Captain Elsaesser died at age 41 on May 14 this year when the ship, on her return voyage from a triumphal European tour, was overwhelmed and sank in a squall of hurricane force north of Puerto Rico. With him were lost crew members Barry Duckworth, Vinny Lazzaro and Nina Schack. Armin was a first-rate , admirable skipper, and we have great respect for the people who designed , built and sailed the Pride. We think the best tribute to the ship and her people is to publish her skipper&#39;s testament on why she was built and how she was sailed in the nine short years since her launching on the Baltimore waterfront on May 1, 1977. In the war of 18 12, the remarka ble earl y success of a small , enthusiastic naval fo rce was augmented by a group of sw ift &quot; Baltimore_-bu ilt&quot; schooners and brigs . They were -designed and built with the ex press purpose of speed and di spatch. Size and cargo carrying capacity were a liability to vessels transportin g small , high-value shipments_ Quickness and maneuverability ensured survival. By mid- 1814, the &quot; persiste nt, noiseless&quot; British blockade was so effecti ve that even this fl ourishing , governmentsanctioned private enterprise was brought nearly to a halt. Nevertheless , a di stincti ve regional vessel type had evo lved which inspired the idea of speed under sail and which influenced progressive sailing vessel des ign many years hence. Howard Chape lle fe lt that &quot; ... the Baltimore C lipper will always remain the type representati ve of the highest development of small sa iling craft , as built by American builders. &quot; Unobscured by romantic fa ncy and hi storic hyperbo le, pri vateering ge nerall y was not profit able_ And although the Briti sh merchant fleet suffered signi ficant losses , it survived . Perh aps more important , in retrospect, was the rise of a di stinct, creati ve achievement in ship des ign which was highl y admired on the Continent and whose audacio us success gave at least a psychological boost to a brash young Republic seekin g identity and independence_ The stunning visual impact and thrilling perform ance satisfi ed an infatuation for beauty and speed . D. Calhoun helped to de fin e the impact o f those sharp model schooners in The Intelligence of a People: &quot; The fas t smuggling ships and privateers that Americans had begun to build even before the Revolution, and that had reached their highest state during the Napo leonic wars , di splayed a problem-solving and produc36

Captain Elsaesser at far right with crew members aboard the Pride of Baltimore at Hamburg, Germany. Photo by Ma rtin Brinkmann.

ti ve capacity to all the wo rld . Shipbuilding proved the American mind .&quot; It was pri vateering and the vessels that served in that trade which wo uld turn out to be Baltimore &#39; s greatest contribution to maritime history . Chapelle specul ated on the difficulty and validity of technical and practical analysis o f ship types and fo rms from evidence other than the ships themselves . Would we ever be able to do more than &quot; visualize the long black Baltimore model schooner under a cloud of snowy whi te canvas reaching across the wind ?&quot; Would we ever feel the thrill o f dri ving thi s &quot; light weather fl yer . .. calculated for extraordinary sailing?&quot; There is evidence that a true Baltimore Clipper, Vigilant, survi ved as late as 1928 serving fi nally as a packet between St. Thomas and St. Croi x. Until 1977, she was the last vesti ge of thi s di stincti ve and significant Ameri can vessel type. In February o f that year, the topsail schooner Pride of Baltimore was launched . The details of her inception and construction are already well known to the readers of thi s publication _ She would serve the city as a sailing symbol of the vital role Baltimore had played and continues to play in the course of A meri can maritime commerce . Let&#39; s look at the

value of Pride in another dimension: that of a tra ining platfo rm for the practice and pe rpetuation of nautical skill s and as an acti ve, sailing reminder of the ex plo its of A merica &#39; s ri ch maritime heritage . O n Pride we are committed to an authe nti c ri g tempered onl y by safety considerations. T hat means that she is properl y equipped with modern navigationa l gea r, a n auxiliary engine, and some synthetic standing and running ri gging. But her appearance and shape as a representati ve , peri od , sharp-built schooner has in no way been altered . It has evolved in some small changes in ri g as we learn some of the secrets of sailing thi s once extinct type. She is maintained in the traditional manner using materials which, over time , have proven effective. A loyal, hard working, profess ional crew of twelve keeps her in fi rst-class condition. In May of 1982, crewmembers and fri ends of Pride celebrated her fiv e years of acti ve , successful sailing; proving, I think , that properl y managed reconstructions o f significant , historical vessels can work . This is a valid approach to maritime preservation which should seriously be considered in a time when the fund of unrestored , hi storicall y significant vessels is nearl y depl eted , and the cost of restoration is so prohibitive. Perh aps the most important consideratio n here is the fac t that a ship reconstruction has no intrinsic value as a hi stori c vessel, thus she can be sailed actively . There are man y dimensio ns to thi s, since a working vessel serves more fun ctions than a static display. For example , over forty people have sailed as paid crewmembers on Pride-* Admittedly, thi s is not a large group . Neverthe less , access to sailing aboard a large tradi tio nal vessel is available and that number wi II continue to grow . Personal reactions to that service are ex pressed firsthand to many others by di scuss ion, photographs and narrati ve. A progra m has been instituted to introdu ce inex perienced Baltimore City res idents of vari ous ages and backgrounds to that unique opportunity of sailing as crew on a Baltimore Clipper. This program promi ses to increase community invo lvement and support of the ship in a dy namic , individual way. In addition, the reconstruction can be a learning event in itself. It serves as a foc us for interests and talents within the maritime community as well as within the community at large. Thus , Pride has served to perpetuate traditional sailing , seamanship and boatbuilding skill s and has exposed crewmembers to the ri gors *Thi s article was written in 1982. SEA HISTORY , AUTUMN 1986