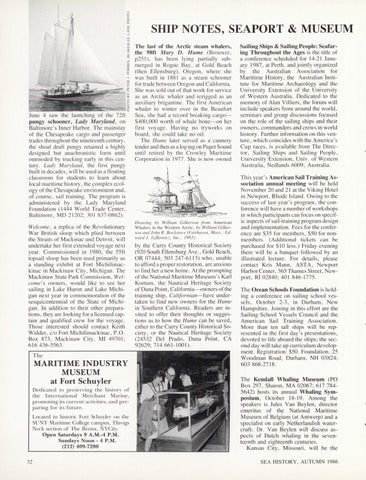 The last of the Arctic steam whalers,

p251 ), has been lying partially sub1nerged in Rogue Bay, at Gold Beach

June 4 saw the launching of the 72ft pungy schooner, Lady Maryland , on Baltimore's Inner Harbor. The mainstay of the Chesapeake cargo and passenger trades throughout the nineteenth century, the shoal draft pungy retained a highly designed but anachronistic form until outmoded by trucking early in this century. Lady Maryland, the first pungy built in decades, will be used as a floating classroom for students to learn about loca l maritime hi story, the complex ecology of the Chesapeake env ironment and , of co urse, sai l training . The program is administered by the Lady Maryland Foundation ( 1444 World Trade Center, Baltimore , MD 21202; 301 837-0862).

Welcome, a replica of the Revolutionary War British sloop which plied between the Straits of Mackinac and Detroit , will undertake her first extended voyage next year. Commissioned in 1980, the 55ft topsail sloop has been used primarily as a standing exhibit at Fort Michilimackinac in Mackinaw City, Michigan. The Mackinaw State Park Commission , Welcome's owners, would like to see her sai ling in Lake Huron and Lake Michiga n next year in commemoration of the sesq ui cente nni a l of the State of Michigan. In addition to their other preparations , they are looking for a licensed captain and qualified crew for the voyage. Those interested should contact Keith Widder , c/o Fort Michilimackinac , P.O. Box 873, Mackinaw City , Ml 49701; 616 436-5563 . The

was built in 1881 as a steam schooner for trade between Oree:on and Californi a. She was sold out of that work for serv ice as an Arcti c wha ler and rerigged as an auxiliary brigantine. The first American whaler to winter over in the Beaufort Sea, she had a record breaking cargo$400,000 worth of wha le bone-on her first voyage. Having no tryworks on board , she cou ld take no oil. The Hume later served as a cannery tender and then as a log tug on Puget Sound until retired by the Crowley Maritime Corporation in 1977. She is now owned '-'

by the Curry County Historical Society (920 South Ellensburg Ave ., Gold Beach , OR 07444; 503 247-61 13) who , unable to afford a proper restoration , are anxious to find her a new home. At the prompting of the National Maritime Museum 's Karl Kortum , the Nautical Heritage Society of Dana Point, California-owners of the training ship, Californian-have undertaken to find new owners for the Hume in Southern Ca liforni a. Readers are invited to offer their thoughts or suggestions as to how the Hume can be saved, either to the Curry County Historical Soc iety, or the Nautical Heritage Society (24532 Del Prado , Dana Point , CA 92629; 714 661-1001).

Sailing Ships & Sailing People: Seafaring Throughout the Ages is the title of a conference scheduled for 14-21 January 1987 , at Perth, and jointly organized by the Australian Association for Maritime History, the Australian Institute for Maritime Archaeology a nd the University Extension of the University of Western Australia. Dedicated to the memory of Alan Villiers, the forum will include speakers from around the world, sem inars and group discussions focused on the role of the sailing ships and their owners, commanders and crews in world hi story . Further information on this venture , which coincides with the America 's Cup races, is available from The Director , Sailing Ships and Sailing People , University Extension , Univ. of Western A ustralia , Nedlands 6009, Australia . This year's American Sail Training Association annual meeting will be he ld November 20 and 21 at the Viking Hotel in Newport, Rhode Is la nd. Owing to the success of last year's progra m, the conference will have a numbe r of workshops in which participants can focus on specific aspects of sail-training program desi g n and implementation . Fees for the conference are $35 for members, $50 for nonmem bers. (Add itio nal tickets can be purchased for $ 10 less .) Friday evening there will be a banquet followed by an illustrated lecture. For details , please contact Kris Mann , ASTA, Newport Harbor Center, 365 Thames Street , Newport , RI 02840; 401 846-1775. The Ocean Schools Foundation is holding a conference on sailing school vesse ls, October 2-3 , in Durham, New Hampshire. Joinin g in this effort are the Sailing School Vessels Council and the American Sail Training Association. More than ten tall ships will be represented in the first day's presentations, devoted to life aboard the ships; the second day will take up curriculum development. Registration: $50. Foundation, 25 Woodman Road , Durham, NH 03824; 603 868-2718. The Kendall Whaling Museum (PO Box 297 , Sharon, MA 02067; 617 7845642) hosts its a nnu al Whaling Symposium , October 18-19. Among the speakers is Jules Van Beylen , director emeritus of the National Maritime Museum of Belgium (at Antwerp) and a specialist on early Netherlandish watercraft. Dr. Van Beylen will discuss aspects of Dutch whaling in the seventeenth and e ighteenth centuries. Kansas City, Missouri , will be the SEA HISTORY , AUTUMN 1986