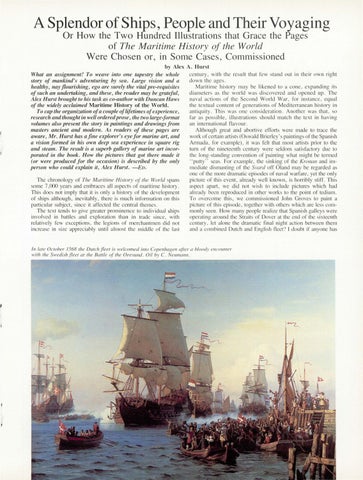 A Splendor of Ships, People and Their Voyaging Or How the Two Hundred Illustrations that Grace the Pages of The Maritime History of the World Were Chosen or, in Some Cases, Commissioned by Alex What an assignment! To weave into one tapestry the whole story of mankind&#39;s adventuring by sea. Large vision and a healthy, nay flourishing, ego are surely the vital pre-requisites of such an unde1taking, and these, the reader may be grateful, Alex Hurst brought to his task as co-author with Duncan Haws of the widely acclaimed Maritime History of the World. To cap the organization of a couple of lifetimes ofexperience, research and thought in well ordered prose, the two large-format volumes also present the story in paintings and drawings from masters ancient and modem. As readers of these pages are aware, Mr. Hurst has a.fine explorer&#39;s eye for marine art, and a vision formed in his own deep sea experience in square rig and steam. The result is a superb gallery of marine art incorporated in the book. How the pictures that got there made it (or were produced for the occasion) is described by the only person who could explain it, Alex Hurst. -ED. The chron ology of The Maritime History of the World spans some 7 ,000 years and embraces all aspects of maritime hi story . This does not impl y that it is onl y a hi story of the development of ships a lthough, inevitab ly , there is much info1111ation on this pa11icular subject, since it affected the central themes. The text tends to g ive greater prominence to indi vidual ships invo lved in battles and explorati on than in trade since , with relatively few exceptions , the legions of me rchantme n did not increase in size apprec iab ly until almost th e middle of the last

A. Hurst ce ntury , with the res ult that few stand out in their own right down the ages. Maritime hi story may be like ned to a cone , expanding its diameters as the world was discovered and ope ned up . The naval actions of the Second World War , for instance , eq ua l th e textual content of generations of Mediterranean history in antiquity. This was one consideration. Another was that, so far as possible , illustrations shou ld match the text in having an international flavour. Although great and abo11ive efforts were made to trace the work of ce11ain a11ists (Oswald Brierley&#39;s paintings of the Spanish Armada, for example) , it was felt that most a11 ists prior to the turn of th e nineteenth ce ntury were seldom satisfactory clue to the long-standing convention o f &quot;painting what might be termed &quot; putty&quot; seas. For example , the sinking of the Kronan and immediate di smasting of the Svare/ off Oland may be regarded as one o f the more dramatic episodes of nava l warfare, yet the on ly picture of this event , already well known , is horribly stiff. This aspect apai1, we did not wish to include pictures which had already been reproduced in other works to the point of tedium. To overcome this , we comm issioned John Groves to paint a picture of thi s episode, together w ith others which are less commonly seen. How many people reali ze that Spanish ga lleys were operating around the Straits of Dover at the encl of the sixtee nth cen tury , let alone the dramatic final ni ght act io n between them and a co mbined Dutch and Eng lish fl eet&#39;) I doubt if anyone has