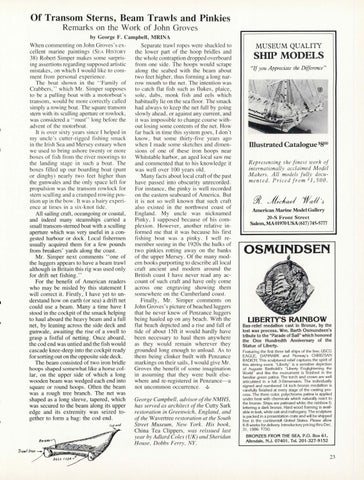 Of Transom Sterns, Beam Trawls and Pinkies Remarks on the Work of John Groves by George F. Campbell , MRI NA When commenting on John Graves &#39;s exSeparate traw l ropes were shac kl ed to cellent marine paintings (SEA HISTORY the lower part of the hoop bridles and 38) Robert Simper makes some surpri sthe who le cont raption dro pped overboard ing assertions regarding supposed artistic fro m one side. The hoops wo uld scrape mi stakes, on which I would like to coma long the seabed with the beam about ment from persona l ex peri ence. two feet higher, thus forming a long narThe boat shown in the &quot; Famil y of row mouth to the net . The intention was to catch fl at fi sh such as flukes , plaice , Crabbers,&quot; which Mr. S imper supposes to be a pulling boat with a motorboat&#39;s so le, dabs, monk fis h and eels which tra nsom , wo uld be more correctl y ca ll ed habituall y lie on the sea fl oor. The smack had always to keep the net full by going simply a row ing boat. The square transom slow ly ahead, or against any current , and stem with its sculling ape1ture or row lock, was considered a &quot; must&quot; long before the it was imposs ibl e to change course withadvent of the motorboat. out los ing some contents of the net. How It is over sixty years since I he lped in fa r back in time thi s system goes, I don &#39; t my un cle&#39;s cutter-ri gged fis hing smack know , but some thirty-fi ve years ago in the Irish Sea and Mersey estuary when when I made some sketches and dimenwe used to bring ashore twenty or more sio ns of one of these iron hoops near boxes of fis h from the river moorings to Whitstable harbor, an aged local saw me the landing stage in such a boat. T he and commented that to hi s know ledge it boxes fill ed up our boarding boat (punt was well over 100 years old . or dinghy) nearl y two feet higher than Many fac ts about local craft of the past the gun wales and the onl y space left for have passed into obscurity unrecorded . propul sion was the tra nsom row lock fo r For instance, the pinky is well recorded stern scull ing and a cramped row ing poson the eastern seaboard of America. But ition up in the bow. It was a hairy experiit is not so well known that such craft ence at times in a six-k not tide. also ex isted in the north west coast of England. My uncle was nickn amed All sailing craft, oceangoing or coastal, Pinky , I supposed because of his comand indeed many steamships canied a plex ion. However, another re lati ve insmall transom-sterned boat with a sculling fo rmed me that it was because his first aperture which was very useful in a confi shing boat was a pinky. I well regested harbour or dock. Local fi shermen member seeing in the 1920s the hulks of usually acquired them for a few pounds two pinkies rotting away on the banks from breakers&#39; yards along the coast. o f the upper Mersey. Of the many modMr. Simper next comments &quot;one of ern books purportin g to describe all local the luggers appears to have a beam trawl craft anc ient and modern around the although in Britain this ri g was used onl y Briti sh coast I have never read any acfor drift net fi shing.&#39; &#39; count of such craft and have onl y come For the benefit of American readers across one engraving showing them who may be misled by thi s statement I somewhere on the Cumberland coast. will correct it. Firstl y, I have yet to unFinall y, Mr. Simper comments on derstand how on earth (or sea) a drift net John Gra ves&#39;s picture of beached luggers could use a beam . Many a time have I that he never knew of Penzance luggers stood in the cockpit of the smack helping be ing hauled up on any beach . With the to haul aboard the heavy beam and a full flat beach depicted and a ri se and fall of net, by leaning across the side deck and tide of about l 5ft it would hardl y have gunwale, awaiting the rise of a swell to been necessary to haul them anywhere grasp a fi stful of netting. Once aboard , as they would remain wherever they the cod end was untied and the fi sh would grounded long enough to unl oad . As to cascade knee-deep into the cockpit ready them be ing clinker built with Penzance for sorting out on the opposite side deck . markings on the ir sail s, I wo uld g ive Mr. The beam consisted of two iron bridle Groves the benefit of some imag ination hoops shaped somewhat like a horse colin assuming that they were built e lselar, on the upper side of which a long where and re-registered in Penza nce-a wooden beam was wedged each end into not uncommon occurrence . w square or round hoops. Often the beam was a rough tree branch . The net was George Campbell , advisor of the NMHS , shaped as a Jong sleeve , tapered , which has served as architect of the Cutty Sark was secured to the beam along its upper restoration in Greenwich, England, and edge and its extremity was seized toof the Wavertree restoration at the South gether to form a bag: the cod end . Street Museum , New York . His book, China Tea Clippers, was reissued last year by Adlard Coles (UK) and Sheridan House, Dobbs Ferry, NY.

LIBERTY&#39;S RAINBOW Bas-relief medallion cast in Bronze, by the lost wax process. Wm. Barth Osmundsen&#39;s tribute to the &quot; Parade of Sail&quot; which honored the One Hundredth Anniversary of the Statue of Liberty. Featuring the fi rst three tall ships of the line; USCG EAG LE, DANMARK and Norway&quot;s CHRISTIAN RADICH. This scu lptured relief captures th e spirit of this stirrin g event. &quot; Liberty&quot; is a sensitive depiction of Auguste Bartholdi&#39;s &quot;&#39;Liberty Englightening the World .. and like the m onument is fi nished in the familiar green patina. The torch and crown are well arti culated in a full 3-Dimension. The individually signed and numbered 14 inch bronze m edallion is carefully finished at every stage of the casting process. The three color, polychrome patina is applied under heat with chemicals which naturally react to the bronze. Ships are patinaed white; the rainbow &amp; lettering a dark bronze. Hard wood framing is available in teak, white oak and mahogany. Th e sculpture is packed in a prese ntation crate and will be shipped free in the continental United States. Please allow 6-8 weeks fo r delivery. Introductory pricing thru Dec. 31, 1986: $750.