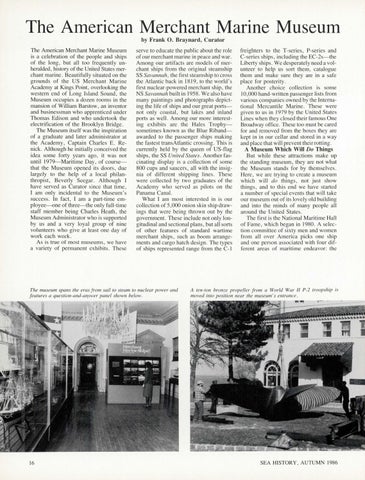 The American Merchant Marine Museum by Frank 0. Braynard, Curator The American Merchant Marine Museum is a celebration of the people and ships of the long, but all too frequently unheralded , history of the United States merchant marine. Beautifully situated on the grounds of the US Merchant Marine Academy at Kings Point, overlooking the western end of Long Island Sound, the Museum occupies a dozen rooms in the mansion of William Barstow, an inventor and businessman who apprenticed under Thomas Edison and who undertook the e lectrification of the Brooklyn Bridge. The Museum itself was the inspiration of a graduate and later administrator at the Academy, Captain Charles E. Renick . Although he initially conceived the idea some forty years ago, it was not until 1979-Maritime Day , of coursethat the Museum opened its doors , due largely to the help of a local philanthropist , Beverly Seegar. Although I have served as Curator since that time , I am only incidental to the Museum&#39;s success. In fact, I am a part-time employee--0ne of three- the only full-time staff member being Charles Heath, the Museum Administrator who is supported by us and a very loyal group of nine volunteers who give at least one day of work each week. As is true of most museums, we have a variety of permanent exhibits. These

serve to educate the public about the role of our merchant marine in peace and war. Among our artifacts are models of merchant ships from the original steamship SS Savannah, the first steamship to cross the Atlantic back in 1819, to the world &#39;s first nuclear-powered merchant sh ip , the NS Savannah built in 1958. We also have many paintings and photographs depicting the life of ships and our great portsnot only coastal , but lakes and inland ports as well. Among our more interesting exhibits are the Hales Trophysometimes known as the Blue Ribandawarded to the passenger ships making the fastest transAtlantic crossing. This is currently held by the queen of US-flag ships, the SS United States. Another fascinating display is a col lection of some 800 cups an.d saucers , all with the insignia of different shipping lines . These were collected by two graduates of the Academy who served as pilots on the Panama Canal . What I am most interested in is our collection of 5,000 onion skin ship drawings that were being thrown out by the government. These include not only longitudinal and sectional plans, but all sorts of other features of standard wartime merchant ships , such as boom arrangements and cargo hatch design. The types of ships represented range from the C- 1

The museum spans the eras from sail to steam to nuclear power and f eatures a question-and-a11;swer panel shown below.

freighters to the T-series , P-series and C-series ships , including the EC-2s- the Liberty ships . We desperately need a volunteer to help us sort them, catalogue them and make sure they are in a safe place for posterity. Another choice collection is some I0,000 hand-written passenger lists from various companies owned by the International Mercantile Marine. These were given to us in 1979 by the United States Lines when they closed their famous One Broadway office. These too must be cared for and removed from the boxes they are kept in in our cellar and stored in a way and place that will prevent their rotting. A Museum Which Will Do Things But while these attractions make up the standing museum , they are not what the Museum stands for by themselves. Here , we are trying to create a museum which will do things, not just show things, and to this end we have started a number of spec ial events that will take our museum out of its lovely old building and into the minds of many people all around the United States. The first is the National Maritime Hall of Fame, which began in 1980 . A selection committee of sixty men and women from all over America picks one ship and one person associated with four different areas of maritime endeavor: the

A ten-ton bronze propeller from a World War II P-2 troopship is moved into position near the museum&#39; s entrance.