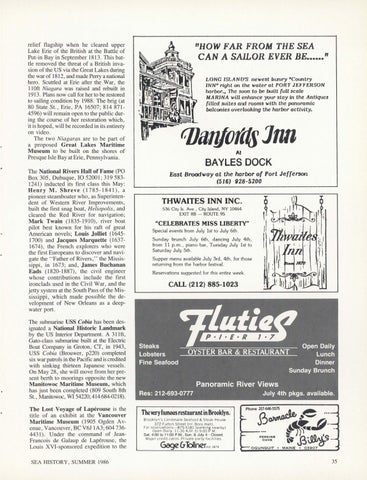 relief flagship when he cleared upper Lake Erie of the British at the Battle of Put-in Bay in September 1813 . This battle removed the threat of a British invasion of the US via the Great Lakes during the war of 1812, and made Perry a national hero. Scuttled at Erie after the War, the l lOft Niagara was raised and rebuilt in 1913. Plans now call for her to be restored to sailing condition by 1988. The brig (at 80 State St., Erie, PA 16507; 814 8714596) will remain open to the public during the course of her restoration which, it is hoped , will be recorded in its entirety on video . The two Niagaras are to be part of a proposed Great Lakes Maritime Museum to be built on the shores of Presque Isle Bay at Erie, Pennsylvania. The National Rivers Hall of Fame (PO Box 305, Dubuque, IO 52001 ; 319 5831241) inducted its first class this May: Henry M. Shreve (1785-1841), a pioneer steamboater who, as Superintendent of Western River Improvements, built the first snag boat, Heliopolis, and cleared the Red River for navigation ; Mark Twain (1835-1910), river boat pilot best known for his raft of great American novels; Louis Jolliet (16451700) and Jacques Marquette (16371674), the French explorers who were the first Europeans to discover and navigate the &quot;Father of Rivers, &quot; the Mississippi, in 1673; and, James Buchanan Eads (1820-1887) , the civil engineer whose contributions include the first ironclads used in the Civil War, and the jetty system at the South Pass of the Mississippi , which made possible the development of New Orleans as a deepwater port.

&quot;HOW FAR FROM THE SEA

CAN A SAILOR EV ER BE•••••• n LONG ISi.A ND&#39;S newest lluury &quot;Co1mlry INN&quot; right on the water at PORJ&quot; Jf;J•f&quot;EHSON harbor., 1l1e soon to be built full scale MARINA will enhance your stay in the Antiques filled suites and rooms with the panoramic balconies overlooking U!e harbor activity.

for this entire week .

The submarine USS Cobia has been designated a National Historic Landmark by the US Interior Department. A 311 ~· Gato-class submarine built at the Electric Boat Company in Groton, CT, in 1943 , USS Cobia (Brouwer, p220) completed six war patrols in the Pacific and is credited with sinking thirteen Japanese vessels. On May 28, she will move from her present berth to moorings opposite the new Manitowoc Maritime Museum, which has just been completed (809 South 8th St. , Manitowoc, WI 54220; 414 684-0218). The Lost Voyage of Laperouse is the title of an exhibit at the Vancouver Maritime Museum (1905 Ogden Avenue , Vancouver , BC V6J IA3 ; 604 7364431). Under the command of JeanFrancois de Galaup de Laperouse, the Louis XVI-sponsored expedition to the SEA HISTORY , SUMMER 1986