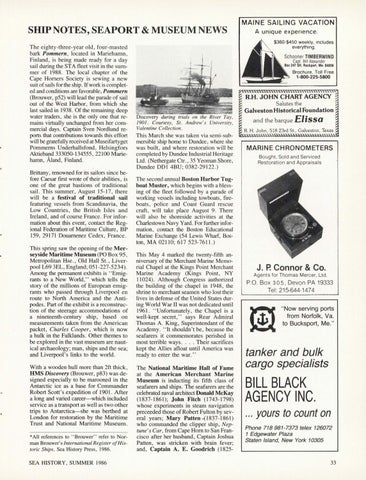 SHIP NOTES, SEAPORT &amp; MUSEUM NEWS The eighty-three-year old, four-masted bark Pommern , located in Mariehamn, Finland, is being made ready for a day sai l during the ST A fleet visit in the summer of I 988 . The local chapter of the Cape Homers Society is sewing a new suit of sails for the ship. If work is completed and conditions are favorable, Pommern (Brouwer, p52) will lead the parade of sail out of the West Harbor, from which she last sailed in 1938 . Of the remaining deep water traders, she is the only one that remains virtually unchanged from her commercial days. Captain Sven Nordlund reports that contributions towards this effort will be gratefully received at Museifartyget Pommems Underhallsfond , Helsingfors Aktieband 333050-134555, 22100 Marieharnn , Aland, Finland . Brittany, renowned for its sailors since before Caesar first wrote of their abilities, is one of the great bastions of traditional sail. This summer, August 15-17, there will be a festival of traditional sail featuring vessels from Scandinavia, the Low Countries, the British Isles and Ireland, and of course France. For information about this event, contact the Regional Federation of Maritime Culture, BP 159, 29171 Douarnenez Cedex, France. This spring saw the opening of the Merseyside Maritime Museum (PO Box 95, Metropolitan Hse ., Old Hall St. , Liverpool L69 3EL, England; 051-227-5234). Among the permanent exhibits is &quot;Emigrants to a New World ,&quot; which tells the story of the millions of European emigrants who passed through Liverpool en route to North America and the Antipodes. Part of the exhibit is a reconstruction of the steerage accommodations of a nineteenth-century ship, based on measurements taken from the American packet, Charles Cooper, which is now a hulk in the Falklands. Other themes to be explored in the vast museum are nautical archaeology; man , ships and the sea; and Liverpool &#39;s links to the world. With a wooden hull more than 2ft thick ,

HMS Discovery (Brouwer, p83) was designed especially to be marooned in the Antarctic ice as a base for Commander Robert Scott&#39;s expedition of 1901 . After a long and varied career-which included service as a transport as well as two other trips to Antarctica-she was berthed at London for restoration by the Maritime Trust and National Maritime Museum. *All references to &quot;Brouwer&quot; refer to Norman Brouwer&#39;s International Register of Historic Ships, Sea History Press , 1986.

This March she was taken via semi-submersible ship home to Dundee, where she was built, and where restoration will be completed by Dundee Industrial Heritage Ltd. (Nethergate Ctr., 35 Yeoman Shore, Dundee DD! 4BU ; 0382-29122 .)

The second annual Boston Harbor Tugboat Muster, which begins with a blessing of the fleet followed by a parade of working vessels including towboats , fireboats, police and Coast Guard rescue craft, will take place August 9 . There will also be shoreside activities at the Charlestown Navy Yard. For further information, contact the Boston Educational Marine Exchange (54 Lewis Wharf, Boston, MA 02110; 617 523-7611.) This May 4 marked the twenty-fifth anniversary of the Merchant Marine Memorial Chapel at the Kings Point Merchant Marine Academy (Kings Point, NY 11024) . Although Congress authorized the building of the chapel in 1948, the shrine to merchant seamen who lost their lives in defense of the United States during World War II was not dedicated until 1961. &quot;Unfortunately, the Chapel is a well-kept secret,&#39;&#39; says Rear Admiral Thomas A. King , Superintendant of the Academy. &quot;It shouldn&#39;t be , because the seafarers it commemorates perished in most terrible ways ... . Their sacrifices kept the Allies afloat until America was ready to enter the war.&quot; The National Maritime Hall of Fame at the American Merchant Marine Museum is inducting its fifth class of seafarers and ships . The seafarers are the celebrated naval architect Donald McKay (1837-1861); John Fitch (1743-1798) whose experiments in steam navigation preceeded those of Robert Fulton by several years; Mary Patten -(1837-1861) who commanded the clipper ship, Neptune&#39;s Car, from Cape Hom to San Francisco after her husband , Captain Joshua Patten , was stricken with brain fever; and, Captain A. E. Goodrich (1825-