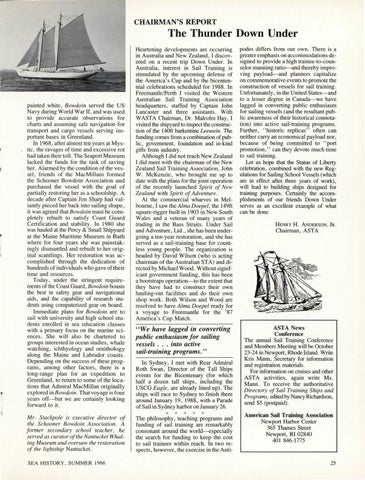 The Thunder Down Under

painted white, Bowdoin served the US Navy during World War II, and was used to provide accurate observations for charts and assuming safe navigation for transport and cargo vessels serving important bases in Greenland. In 1968, after almost ten years at Mystic, the ravages of time and excessive rot had taken their toll. The Seaport Museum lacked the funds for the task of saving her. Alarmed by the condition of the vessel, friends of the MacMillans formed the Schooner Bowdoin Association and purchased the vessel with the goal of partially restoring her as a schoolship. A decade after Captain Jim Sharp had valiantly pieced her back into sailing shape, it was agreed that Bowdoin must be completely rebuilt to satisfy Coast Guard Certification and stability. In 1980 she was hauled at the Percy &amp; Small Shipyard at the Maine Maritime Museum in Bath where for four years she was painstakingly dismantled and rebuilt to her original scantlings . Her restoration was accomplished through the dedication of hundreds of individuals who gave of their time and resources. Today, under the stringent requirements of the Coast Guard, Bowdoin boasts the best in safety gear and navigational aids, and the capability of research students using computerized gear on board. Immediate plans for Bowdoin are to sail with university and high school students enrolled in sea education classes with a primary focus on the marine sciences. She will also be chartered to groups interested in ocean studies, whale watching, ichthyology and ornithology along the Maine and Labrador coasts. Depending on the success of these programs, among other factors , there is a long-range plan for an expedition to Greenland, to return to some of the locations that Admiral MacMillan originally explored in Bowdoin . That voyage is four years off-but we are certainly looking forward to it.

Mr . Stackpole is executive director of the Schooner Bowdoin Association. A former secondary school teacher, he served as curator of the Nantucket Whaling Museum and oversaw the restoration of the lightship Nantucket. SEA HISTORY, SUMMER 1986

Heartening developments are occurring in Australia and New Zealand, I discovered on a recent trip Down Under. In Australia, interest in Sail Training is stimulated by the upcoming defense of the America&#39;s Cup and by the bicentennial celebrations scheduled for 1988 . In Freemantle/Perth I visited the Western Australian Sail Training Association headquarters, staffed by Captain John Lancaster and three assistants . With WASTA Chairman, Dr. Malcolm Hay, I visited the shipyard to inspect the construction of the 140ft barkentine Leeuwin . The funding comes from a combination of public, government, foundation and in-kind gifts from industry. Although I did not reach New Zealand I did meet with the chairman of the New Zealand Sail Training Association, John W . McKenzie , who brought me up to date with the plans for the joint operation of the recently launched Spirit of New Zealand with Spirit of Adventure . At the commercial wharves in Melbourne, I saw theAlmaDoepel, the 149ft square-rigger built in 1903 in New South Wales and a veteran of many years of trading in the Bass Straits. Under Sail and Adventure, Ltd ., she has been undergoing a ten-year restoration, and she has served as a sail-training base for countless young people. The organization is headed by David Wilson (who is acting chairman of the Australian ST A) and directed by Michael Wood. Without significant government funding, this has been a bootstraps operation-to the extent that they have had to construct their own hauling-out facilities and do their own shop work. Both Wilson and Wood are resolved to have Alma Doepel ready for a voyage to Freemantle for the &#39;87 America&#39; s Cup Match .

podes differs from our own . There is a greater emphasis on accommodations designed to provide a high trainee-to-counselor manning ratio--and thereby improving payload-and planners capitalize on commemorative events to promote the construction of vessels for sail training. Unfortunately, in the United States-and to a lesser degree in Canada-we have lagged in converting public enthusiasm for sailing vessels (and the resultant public awareness of their historical connotation) into active sail-training programs. Further, &quot;historic replicas&quot; often can neither carry an economical payload nor, because of being committed to &quot;port promotion,&quot; can they devote much time to sail training. Let us hope that the Statue of Liberty celebration, combined with the new Regulations for Sailing School Vessels (which are in effect after_three years of work), will lead to building ships designed for training purposes. Certainly the accomplishments of our friends Down Under serves as an excellent example of what can be done.

In Sydney, I met with Rear Admiral Roth Swan, Director of the Tall Ships events for the Bicentenary (for which half a dozen tall ships, including the USCG Eagle, are already lined up) . The ships will race to Sydney to finish there around January 19, 1988, with a Parade of Sail in Sydney harbor on January 26.

The philosophy, teaching programs and funding of sail training are remarkably consonant around the world-especially the search for funding to keep the cost to sail trainees within reach. In two respects, however, the exercise in the Anti-