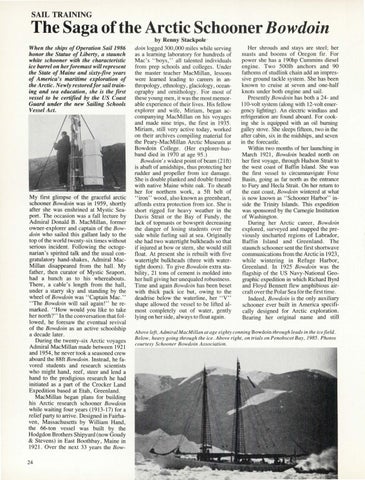 The Saga of the Arctic Schooner Bowdoin When the ships of Operation Sail 1986 honor the Statue of Liberty, a staunch white schooner with the characteristic ice barrel on her foremast will represent the State of Maine and sixty-five years of America&#39;s maritime exploration of the Arctic. Newly restored for sail training and sea education, she is the first vessel to be certified by the US Coast Guard under the new Sailing Schools Vessel Act.

My fust glimpse of the graceful arctic schooner Bowdoin was in 1959, shortly after she was enshrined at Mystic Seaport. The occasion was a fall lecture by Admiral Donald B . MacMillan, former owner-explorer and captain of the Bowdoin who sailed this gallant lady to the top of the world twenty-six times without serious incident. Following the octogenarian&#39;s spirited talk and the usual congratulatory hand-shakes, Admiral MacMillan disappeared from the hall. My father, then curator of Mystic Seaport, had a hunch as to his whereabouts . There, a cable&#39;s length from the hall, under a starry sky and standing by the wheel of Bowdoin was &quot;Captain Mac.&quot; &#39;&#39;The Bowdoin will sail again!&#39; &#39; he remarked. &quot;How would you like to take her north?&#39;&#39; In the conversation that.followed , he foresaw the eventual revival of the Bowdoin as an active schoolship a decade later. During the twenty-six Arctic voyages Admiral MacMillan made between 1921 and 1954, he never took a seasoned crew aboard the 88ft Bowdoin. Instead , he favored students and research scientists who might hand, reef, steer and lend a hand to the prodigious research he had initiated as a part of the Crocker Land Expedition based at Etah, Greenland . MacMillan began plans for building his Arctic research schooner Bowdoin while waiting four years (1913-17) for a relief party to arrive . Designed in Fairhaven, Massachusetts by William Hand, the 66-ton vessel was built by the Hodgdon Brothers Shipyard (now Goudy &amp; Stevens) in East Boothbay, Maine in 1921. Over the next 33 years the Bow24

by Renny Stackpole Âˇ doin logged 300,000 miles while serving as a learning laboratory for hundreds of Mac&#39;s &quot;boys,&quot; all talented individuals from prep schools and colleges. Under the master teacher MacMillan, lessons were learned leading to careers in anthropology, ethnology, glaciology, oceanography and ornithology. For most of these young men, it was the most memorable experience of their lives . His fellow explorer and wife, Miriam, began accompanying MacMillan on his voyages and made nine trips, the first in 1935 . Miriam, still very active today, worked on their archives compiling material for the Peary-MacMillan Arctic Museum at Bowdoin College. (Her explorer-husband died in 1970 at age 95.) Bowdoin&#39; s widest point of beam (21 ft) is abaft of amidships, thus protecting her rudder and propeller from ice damage. She is double planked and double framed with native Maine white oak. To sheath her for northern work, a 5ft belt of &quot; iron&quot; wood, also known as greenheart, affords extra protection from ice . She is short rigged for heavy weather in the Davis Strait or the Bay of Fundy, the lack of topmasts or bowsprit decreasing the danger of losing students over the side while furling sail at sea. Originally she had two watertight bulkheads so that if injured at bow or stem, she would still float. At present she is rebuilt with five watertight bulkheads (three with watertight doors). To give Bowdoin extra stability , 21 tons of cement is molded into her hull giving her unequaled robustness. Time and again Bowdoin has been beset with thick pack ice but, owing to the deadrise below the waterline, her &quot;V&quot; shape allowed the vessel to be lifted almost completely out of water, gently lying on her side, always to float again.

Her shrouds and stays are steel; her masts and booms of Oregon fir. For power she has a 190hp Cummins diesel engine. Two 500lb anchors and 90 fathoms of studlink chain add an impressive ground tackle system. She has been known to cruise at seven and one-half knots under both engine and sail. Presently Bowdoin has both a 24- and 110-volt system (along with 12-volt emergency lighting). An electric windlass and refrigeration are found aboard. For cooking she is equipped with an oil burning galley stove. She sleeps fifteen , two in the after cabin, six in the midships , and seven in the forecastle. Within two months of her launching in March 1921, Bowdoin headed north on her first voyage, through Hudson Strait to the west coast of Baffin Island . She was the first vessel to circumnavigate Foxe Basin , going as far north as the entrance to Fury and Hecla Strait. On her return to the east coast, Bowdoin wintered at what is now known as &quot; Schooner Harbor&quot; inside the Trinity Islands . This expedition was sponsored by the Carnegie Institution of Washington. During her Arctic career, Bowdoin explored, surveyed and mapped the previously uncharted regions of Labrador, Baffin Island and Greenland. The staunch schooner sent the first shortwave communications from the Arctic in 1923, while wintering in Refuge Harbor, Greenland. In 1925 Bowdoin was the flagship of the US Navy-National Geographic expedition in which Richard Byrd and Floyd Bennett flew amphibious aircraft over the Polar Sea for the first time . Indeed, Bowdoin is the only auxiliary schooner ever built in America specifically designed for Arctic exploration. Bearing her original name and still

Above left, Admiral Ma cMillan at age eighty conning Bowdoin through leads in the ice field. Below, heavy going through the ice. Above right, on trials on Penobscot Bay, 1985 . Photos courtesy Schooner Bowdoin Association .