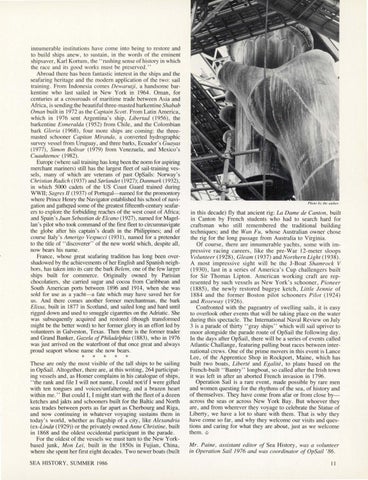 innumerable institutions have come into being to restore and to build ships anew , to sustain, in the words of the eminent shipsaver, Karl Kortum , the &quot;rushing sense of history in which the race and its good works must be preserved.&quot; Abroad there has been fantastic interest in the ships and the seafaring heritage and the modem application of the two: sail training. From Indonesia comes Dewarutji, a handsome barkentine who last sailed in New York in 1964. Oman, for centuries at a crossroads of maritime trade between Asia and Africa, is sending the beautiful three-masted barkentine Shabab Oman built in 1972 as the Captain Scott . From Latin America, which in 1976 sent Argentina&#39;s ship, Libertad (1956), the barkentine Esmeralda (1952) from Chile , and the Colombian bark Gloria ( 1968), four more ships are coming: the threemasted schooner Capitan Miranda , a converted hydrographic survey vessel from Uruguay, and three barks , Ecuador&#39;s Guayas (1977), Simon Bolivar (1979) from Venezuela, and Mexico&#39;s Cuauhtemoc (1982). Europe (where sail training has long been the norm for aspiring merchant mariners) still has the largest fleet of sail-training vessels, many of which are veterans of past OpSails: Norway&#39;s Christian Radich (1937) and SÂ˘rlandet (1927); Danmark (1932), in which 5000 cadets of the US Coast Guard trained during WWII; Sagres II (1937) of Portugal-named for the promontory where Prince Henry the Navigator established his school of navigation and gathered some of the greatest fifteenth-century seafarers to explore the forbidding reaches of the west coast of Africa; and Spain &#39;s Juan Sebastian de Elcano (1927), named for Magellan&#39;s pilot who took command of the first fleet to circumnavigate the globe after his captain&#39;s death in the Philippines; and of course Italy&#39;s Amerigo Vespucci (1931), named for a pretender to the title of &quot;discoverer&quot; of the new world which , despite all , now bears his name. France, whose great seafaring tradition has long been overshadowed by the achievements of her English and Spanish neighbors, has taken into its care the bark Belem, one of the few larger ships built for commerce. Originally owned by Parisian chocolatiers, she carried sugar and cocoa from Caribbean and South American ports between 1896 and 1914, when she was sold for use as a yacht-a fate which may have saved her for us . And there comes another former merchantman, the bark Elissa, built in 1877 in Scotland, and sailed long and hard until rigged down and used to smuggle cigarettes on the Adriatic. She was subsequently acquired and restored (though transformed might be the better word) to her former glory in an effort led by volunteers in Galveston, Texas. Then there is the former trader and Grand Banker, Gaze/a of Philadelphia (1883), who in 1976 was just arrived on the waterfront of that once great and always proud seaport whose name she now bears.

These are only the most visible of the tall ships to be sailing in OpSail. Altogether, there are, at this writing, 264 participating vessels and, as Homer complains in his catalogue of ships, &quot;the rank and file I will not name, I could not/if I were gifted with ten tongues and voices/unfaltering, and a brazen heart within me.&quot; But could I, I might start with the fleet of a dozen ketches and jakts and schooners built for the Baltic and North seas trades between ports as far apart as Cherbourg and Riga, and now continuing in whatever voyaging sustains them in today&#39;s world, whether as flagship of a city, like Alexandria (ex-LindÂ˘ ( 1929)) or the privately owned Anne Christine , built in 1868 and the oldest occidental participant in the parade. For the oldest of the vessels we must tum to the New Yorkbased junk, Mon Lei, built in the 1850s in Fujian , China, where she spent her first eight decades . Two newer boats (built SEA HISTORY , SUMMER 1986

Photo by the author .

in this decade) fly that ancient rig: La Dame de Canton, built in Canton by French students who had to search hard for craftsman who still remembered the traditional building techniques; and the Wan Fu, whose Australian owner chose the rig for the long passage from Australia to Virginia. Of course , there are innumerable yachts, some with impressive racing careers, like the pre-War 12-meter sloops Volunteer (1928), Gleam ( 1937) and Northern Light (1938) . A most impressive sight will be the J-Boat Shamrock V ( 1930), last in a series of America&#39;s Cup challengers built for Sir Thomas Lipton. American working craft are represented by such vessels as New York&#39;s schooner, Pioneer (1885) , the newly restored bugeye ketch, Little Jennie of 1884 and the former Boston pilot schooners Pilot (1924) and Roseway ( 1926). Confronted with the pageantry of swelling sails, it is easy to overlook other events that will be taking place on the water during this spectacle. The International Naval Review on July 3 is a parade of thirty &quot; gray ships&quot; which will sail upriver to moor alongside the parade route of OpSail the following day. In the days after OpSail, there will be a series of events called Atlantic Challange, featuring pulling boat races between international crews. One of the prime movers in this event is Lance Lee, of the Apprentice Shop in Rockport, Maine, which has built two boats, Liberte and Egalite, to plans based on the French-built &#39;&#39;Bantry &#39;&#39; longboat, so called after the Irish town it was left in after an aborted French invasion in 1796. Operation Sail is a rare event, made possible by rare men and women questing for the rhythms of the sea, of history and of themselves. They have come from afar or from close byacross the seas or across New York Bay. But whoever they are, and from wherever they voyage to celebrate the Statue of Liberty, we have a lot to share with them . That is why they have come so far , and why they welcome our visits and questions and caring for what they are about, just as we welcome them . ..t

Mr. Paine, assistant editor of Sea History , was a volunteer in Operation Sail 1976 and was coordinator of OpSail &#39; 86. II