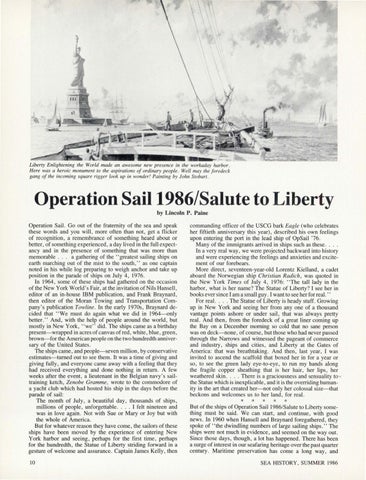 Liberty Enlightening the World made an awesome new presence in the workaday harbor. Here was a heroic monument to the aspirations of ordinary people . Well may the foredeck gang of the incoming square rigger look up in wonder! Painting by John Stobart.

Operation Sail. Go out of the fraternity of the sea and speak these words and you will , more often than not, get a flicker of recognition, a remembrance of something heard about or better, of something experienced, a day lived in the full expectancy and in the presence of something that was more than memorable . . . a gathering of the "greatest sailing ships on earth marching out of the mist to the south," as one captain noted in his while Jog preparing to weigh anchor and take up position in the parade of ships on July 4, 1Â°976. In 1964, some of these ships had gathered on the occasion of the New York World's Fair, at the invitation of Nils Hansell , editor of an in-house IBM publication, and Frank Braynard , then editor of the Moran Towing and Transportation Company's publication Towline. In the early 1970s, Braynard decided that "We must do again what we did in 1964-only better." And , with the help of people around the world , but mostly in New York, "we" did. The ships came as a birthday present-wrapped in acres of canvas ofred, white, blue, green, brown-for the American people on the two hundredth anniversary of the United States. Âˇ The ships came, and people-seven million, by conservative estimates-turned out to see them. It was a time of giving and giving fully, and everyone came away with a feeling that they had received everything and done nothing in return . A few weeks after the event, a lieutenant in the Belgian navy's sailtraining ketch, Zenobe Gramme, wrote to the commodore of a yacht club which had hosted his ship in the days before the parade of sail: The month of July, a beautiful day, thousands of ships, millions of people, unforgettable .... I felt nineteen and was in love again. Not with Sue or Mary or Joy but with the whole of America. But for whatever reason they have come, the sailors of these ships have been moved by the experience of entering New York harbor and seeing, perhaps for the first time, perhaps for the hundredth, the Statue of Liberty striding forward in a gesture of welcome and assurance. Captain James Kelly , then 10

commanding officer of the USCG -bark Eagle (who celebrates her fiftieth anniversary this year), described his own feelings upon entering the port in the lead ship of OpSail '76. Many of the immigrants arrived in ships such as these .... In a very real way, we were projected backward into history and were experiencing the feelings and anxieties and excitement of our forebears . More direct, seventeen-year-old Lorentz Kielland, a cadet aboard the Norwegian ship Christian Radich, was quoted in the New York Times of July 4, 1976: "The tall lady in the harbor, what is her name? The Statue of Liberty? I see her in books ever since I am a small guy. I want to see her for real. '' For real .... The Statue of Liberty is heady stuff. Growing up in New York and seeing her from any one of a thousand vantage points ashore or under sail, that was always pretty real. And then, from the foredeck of a great liner coming up the Bay on a December morning so cold that no sane person was on deck-none, of course, but those who had never passed through the Narrows and witnessed the pageant of commerce and industry, ships and cities, and Liberty at the Gates of America: that was breathtaking . And then, last year, I was invited to ascend the scaffold that boxed her in for a year or so, to see the green lady eye-to-eye, to run my hands along the fragile copper sheathing that is her hair, her lips, her weathered skin .... There is a graciousness and sensuality to ~ the Statue which is inexplicable, and it is the overriding humanity in the art that created her-not only her colossal size-that beckons and welcomes us to her land , for real.

But of the ships of Operation Sail 1986/Salute to Liberty something must be said. We can start, and continue, with good news. In 1960 when Hansell and Braynard foregathered, they spoke of "the dwindling numbers of large sailing ships ." The ships were not much in evidence, and seemed on the way out. Since those days, though, a lot has happened . There has been a surge of interest in our seafaring heritage over the past quarter century. Maritime preservation has come a long way, and SEA HISTORY, SUMMER 1986