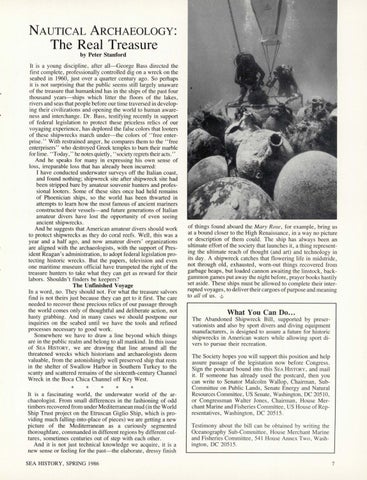 The Real Treasure by Peter Stanford It is a young discipline , after all-George Bass directed the first complete, professionally controlled dig on a wreck on the seabed in 1960, just over a quarter century ago. So perhaps it is not surprising that the public seems still largely unaware of the treasure that humankind has in the ships of the past four thousand years-ships which litter the floors of the lakes , rivers and seas that people before our time traversed in developing their civi lizations and opening the world to human awareness and interchange. Dr. Bass , testifying recently in support of federal legislation to protect these priceless relics of our voyaging experience, has deplored the false colors that looters of these shipwrecks march under-the colors of &quot;free enterprise. &quot; With restrained anger, he compares them to the &quot; free enterprisers&quot; who destroyed Greek temples to bum their marble forlime. &quot; Today ,&quot; he notes quietly , &quot;society regrets their acts.&quot; And he speaks for many in expressing his own sense of loss, irreparable loss that has already been incurred: I have conducted underwater surveys off the Italian coast, and found nothing; shipwreck site after shipwreck site had been stripped bare by amateur souvenir hunters and professional looters. Some of these sites once had held remains of Phoenician ships, so the world has been thwarted in attempts to learn how the most famous of ancient mariners constructed their vessels-and future generations of Italian amateur divers have lost the opportunity of even seeing ancient shipwrecks. And he suggests that American amateur divers should work to protect shipwrecks as they do coral reefs. Well , this was a year and a half ago , and now amateur divers&#39; organizations are aligned with the archaeologists , with the support of President Reagan &#39;s administration, to adopt federal legislation protecting historic wrecks . But the papers , television and even one maritime museum official have trumpeted the right of the treasure hunters to take what they can get as reward for their labors. Shouldn&#39;t finders be keepers? The Unfinished Voyage In a word, no . They should not. For what the treasure salvors find is not theirs just because they can get to it first. The care needed to recover these precious relics of our passage through the world comes only of thoughtful and deliberate action , not hasty grabbing. And in many cases we should postpone our inquiries on the seabed until we have the tools and refined processes necessary to good work. Somewhere we have to draw a line beyond which things are in the public realm and belong to all mankind . In this issue of SEA HISTORY , we are drawing that line around all the threatened wrecks which historians and archaeologists deem valuable, from the astonishingly well preserved ship that rests in the shelter of Swallow Harbor in Southern Turkey to the scanty and scattered remains of the sixteenth-century Channel Wreck in the Boca Chica Channel off Key West.

It is a fascinating world, the underwater world of the archaeologist. From small differences in the fashioning of odd timbers recovered from under Mediterranean mud (in the World Ship Trust project on the Etruscan Giglio Ship, which is providing much falling-into-place of pieces) we are getting a new picture of the Mediterranean as a curiously segmented thoroughfare, commanded in different regions by different cu ltures , sometimes centuries out of step with each other. And it is not just technical knowledge we acquire, it is a new sense or feeling for the past-the elaborate, dressy finish SEA HISTORY , SPRING 1986

of things found aboard the Mary Rose, for example, bring us at a bound closer to the High Renaissance, in a way no picture or description of them could. The ship has always been an ultimate effort of the society that launches it, a thing representing the ultimate reach of thought (and art) and technology in its day. A shipwreck catches that flowering life in midstride, not through old, exhausted, worn-out things recovered from garbage heaps , but loaded cannon awaiting the linstock, backgammon games put away the night before, prayer books hastily set aside. These ships must be allowed to complete their interrupted voyages, to deliver their cargoes of purpose and meaning to all of us. J,

What You Can Do ... The Abandoned Shipwreck Bill, supported by preservationists and also by sport divers and diving equipment manufacturers, is designed to assure a future for historic shipwrecks in American waters while allowing sport divers to pursue their recreation . The Society hopes you will support this position and help assure passage of the legistation now before Congress. Sign the postcard bound into this SEA HISTORY , and mail it. If someone has already used the postcard , then you can write to Senator Malcolm Wallop, Chairman, Subcommittee on Public Lands, Senate Energy and Natural Resources Committee, US Senate, Washington , DC 20510, or Congressman Walter Jones , Chairman, House Merchant Marine and Fisheries Commjttee, US House of Representatives, Washington , DC 20515. Testimony about the bill can be obtained by writing the Oceanography Sub-Commjttee, House Merchant Marine and Fisheries Committee, 541 House Annex Two, Washington, DC 20515.