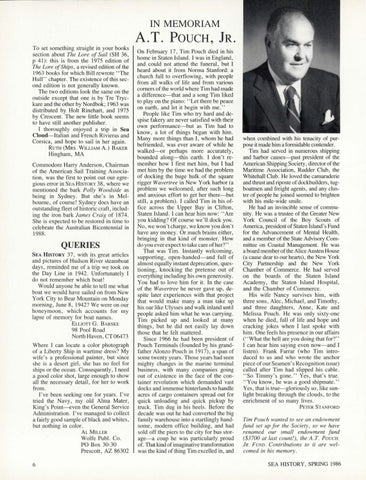 A. T. To set something straight in your books section about The Lore of Sail (SH 36, p 41): this is from the 1975 edition of The Lore of Ships, a revised edition of the 1963 books for which Bill rewrote ''The Hull'' chapter. The existence of this second edition is not generally known. The two editions look the same on the outside except that one is by Tre Tryckare and the other by Nordbok; 1963 was distributed by Holt Rinehart, and 1975 by Crescent. The new little book seems to have still another publisher. I thoroughly enjoyed a trip in Sea Cloud-Italian and French Rivieras and Corsica, and hope to sail in her again. RUTH (MRS. WILLIAM A.) BAKER Hingham, MA Commodore Harry Anderson, Chairman of the American Sail Training Association, was the first to point out our egregious error in SEA HISTORY 38, where we mentioned the bark Polly Woodside as being in Sydney. But she's in Melbourne, of course! Sydney does have an outstanding fleet of historic craft, including the iron bark James Craig of 1874. She is expected to be restored in time to celebrate the Australian Bicentennial in 1988 .

QUERIES SEA HISTORY 37, with its great articles and pictures of Hudson River steamboat days, reminded me of a trip we took on the Day Line in 1942. Unfortunately I do not remember which boat! Would anyone be able to tell me what boat we would have sailed on from New York City to Bear Mountain on Monday morning, June 8, 1942? We were on our honeymoon, which accounts for my lapse of memory for boat names. ELLIOTT G. BARS KE 98 Pool Road North Haven, CT 06473 Where I can locate a color photograph of a Liberty Ship in wartime dress? My wife's a professional painter, but since she is a desert girl, she has no feel for ships or the ocean. Consequently, I need a good color shot, large enough to show all the necessary detail, for her to work from. I've been seeking one for years. I've tried the Navy, my old Alma Mater, King's Point-even the General Service Administration. I've managed to collect a fairly good sample of black and whites, but nothing in color. AL MILLER Wolfe Pub!. Co. PO Box 30-30 Prescott, AZ 86302 6

On February 17, Tim Pouch died in his home in Staten Island. I was in England, and could not attend the funeral, but I heard about it from Norma Stanford: a church full to overflowing, with people from all walks of life and from various comers of the world where Tim had made a difference-that and a song Tim liked to play on the piano: "Let there be peace on earth, and let it begin with me." People like Tim who try hard and despise fakery are never satisfied with their own performance-but as Tim had to know, a lot of things began with him . Many more things than I, whom he had befriended, was ever aware of while he walked-or perhaps more accurately, bounded along-th is earth . I don 't remember how I first met him , but I had met him by the time we had the problem of docking the huge hulk of the square rigger Wavertree in New York harbor (a problem we welcomed, after such long and anxious effort to get her there-but still, a problem). I called Tim in his office across the Upper Bay in Clifton, Staten Island . I can hear him now: "Are you kidding? Of course we'll dock you. No, we won'tcharge, we know you don't have any money. Or much brains either, bringing in that kind of monster. How do you ever expect to take care of her?" That was Tim. Instantly welcoming, supporting, open-handed-and full of almost equally instant deprecation, questioning, knocking the pretense out of everything including his own generosity. You had to love him for it. In the case of the Wavertree he never gave up, despite later experiences with that project that would make many a man take up his oar like Ulysses and walk inland until people asked him what he was carrying. Tim picked up and looked at many things, but he did not easily lay down those that he felt mattered. Since 1966 he had been president of Pouch Terminals (founded by his grandfather Alonzo Pouch in 1917) , a span of some twenty years . Those years had seen mighty changes in the marine terminal business, with many companies going out of existence in the face of the container revolution which demanded vast docks and immense hinterlands to handle acres of cargo containers spread out for quick unloading and quick pickup by truck. Tim dug in his heels . Before the decade was out he had converted the big family warehouse into a startlingly handsome, modem office building, and had sold off the piers to the city for bus storage-a coup he was particularly proud of. That kind of imaginative transformation was the kind of thing Tim excelled in, and

when combined with his tenacity of purpose it made him a formidable contender. Tim had served in numerous shipping and harbor causes-past president of the American Shipping Society, director of the Maritime Association, Rudder Club, the Whitehall Club. He loved the camaraderie and thrust and riposte of dockbuilders, tugboatmen and freight agents, and any cluster of people he joined seemed to brighten with his mile-wide smile . He had an invincible sense of community. He was a trustee of the Greater New York Council of the Boy Scouts of America, president of Staten Island's Fund for the Advancement of Mental Health, and a member of the State Advisory Committee on Coastal Management. He was a board member of the Alice Austen House (a cause dear to our hearts), the New York City Partnership and the New York Chamber of Commerce. He had served on the boards of the Staten Island Academy, the Staten Island Hospital, and the Chamber of Commerce. His wife Nancy survives him, with three sons, Alec, Michael, and Timothy, and three daughters, Anne, Kate and Melissa Pouch. He was only sixty-one when he died, full of life and hope and cracking jokes when I last spoke with him. One feels his presence in our affairs (''What the hell are you doing that for?'' I can hear him saying even now-and I listen) . Frank Farrar (who Tim introduced to us and who wrote the anchor piece of our Seamen's Recognition issue) called after Tim had slipped his cable. "So Timmy's gone." Yes, that's true. "You know, he was a good shipmate. " Yes, that is true-gloriously so, like sunlight breaking through the clouds, to the enrichment of so many lives. PETER STANFORD

Tim Pouch wanted to see an endowment fund set up for the Society, so we have renamed our small endowment fund ($3700 at last count!), the A.T. POUCH, JR . FUND . Contributions to it are welcomed in his memory. SEA HISTORY, SPRING 1986